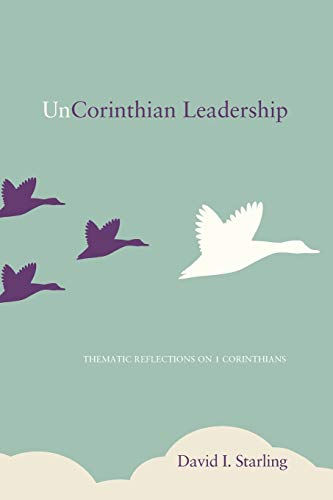 Written by David I. Starling Reviewed By Tim Savage
Ethics and Pastoralia

Leadership is a pivotal issue in late-modern society. Nearly everyone today nurtures an opinion of the marks of effective leadership. In most arenas—government, corporate, and academic—leaders are subjected to constant critique. Those deemed successful command large salaries; those regarded as deficient are dismissed. Not surprisingly, the cultural pre-occupation with leadership has invaded the church of Christ. Pastors must be good leaders—versatile and energetic, creative and organized, exhorters and comforters. In a word, they must do whatever is necessary to make their organization, the local church, flourish in a competitive world. Increasingly, Christian workers are evaluated by the same criteria as those used by the competitive world itself, a practice which David Starling, in his brief but excellent book UnCorinthian Leadership: Thematic Reflections on 1 Corinthians, wants earnestly to rectify.

Starling focuses on the apostle Paul’s implicit teaching about leadership in the first letter to the church of Corinth. While we might have expected a focus on the second epistle to the Corinthians, where Paul explicitly defends his own leadership, Starling confines himself to the earlier letter and, moving from one major section of the letter to another, assembles an unexpected view of leadership.

According to Starling, Paul’s interpretation of leadership is at cross-purposes with that espoused in secular Corinth. For an understanding of secular Corinth, Starling draws on the excellent work of Australian scholars who, for over thirty years now, have expounded the social setting of the New Testament. It was a milieu in which showy leadership was applauded, replete with egotistical boasting, forceful oratory, and superficial displays, in which leaders who exalted themselves could expect public rewards.

In contrast to this was the world in which Paul moved and had his being, the world of a Roman cross, which was both the most ignominious object in antiquity and the central object of Paul’s religion. In Paul’s mind, he was constrained “to know nothing among you except Jesus Christ and him crucified” (1 Cor 2:2). It was an outlook not just different from that of his secular counterparts, but diametrically the opposite; and it issued, not surprisingly, in a form of leadership that many of his own “converts” abhorred.

Starling admirably sifts the biblical evidence to construct Paul’s vision of Christian leadership. In the process, he unearths much that is relevant to Christian leaders today. Few moments of history parallel our times as closely as did the first century. When Paul rejects first-century notions of leadership, he could just as easily have been rejecting our notions today. His own vision of leadership propounds humility, prayer, and service—characteristics epitomized in the cross of Christ. Far from hindering Christian leaders, such characteristics unleash the wisdom and power of God. For this reason, Starling ventures an impassioned plea to conform to the patterns of cross-centered leadership, eschewing secular models for the ways of Christ.

The book is a gem. Not only is the content edifying, but it is also conveyed lucidly in long and fluid sentences. Scattered throughout are trenchant observations such as these:

If we see the essence of [a Christian leader’s] task [as] being an attempt to market Christianity in a post-Christian world, the temptation will always be there for us to reinvent the product to make it more appealing. (p. 67)

The story that matters is not the story of an evolving church, adapting its message to fit with its changing times; it is the story of the mighty works of God in Christ, their proclamation to the ends of the earth, and their transmission from one generation to the next. (p. 70)

[Paul’s] deep, loyal allegiance to the cause of the gospel and his thirsty, passionate desire to share in its blessings are not competing drives but beautifully harmonious aspects of the one quest (p. 36).

In a day when even Christian leaders often depend (unwittingly?) on secular models, we must be careful to drop our buckets into the wellspring of the cross, where our leadership will be refreshed by the perspective and the power of God. To that end David Starling represents a reliable guide.