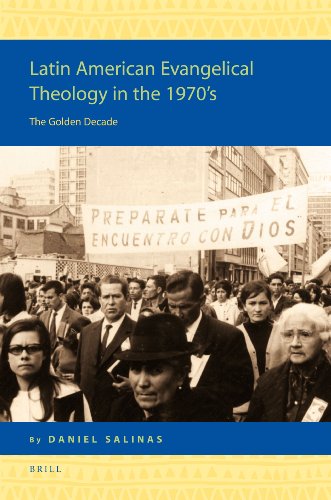 Latin American Evangelical Theology in the 1970’s: The Golden Decade

Latin American theology is often identified with the Roman Catholic Liberationist tradition that originated in the late 1970s. However, as Colombian historian Daniel Salinas has shown in this volume, there was an important indigenous and parallel development of evangelical theology in Latin America. This is required reading for all seeking to understand evangelical movements outside the northern latitudes.

The book is divided in six chapters. The opening chapter establishes the methodological and thematic stage; that is, Salinas’ work is a historiography of the evangelical movement in Latin American. His central thesis “is that evangelical theological production in Hispanic Latin America experienced a decisive maturing process in defining its identity, methodology, and main lines of action in the decade between 1969 and 1979” (p. 6). Furthermore, Salinas defines the term “evangelical” as it is used in Latin American to refer to a Protestant minority, often persecuted, with a contentious relation to Roman Catholicism (p. 8). Theologically, evangélicos are heirs of the Protestant Reformation who place emphasis on the 5 solas. They share an emphasis in personal piety and morality, but with a strong inclination toward the social dimension of the gospel in the heritage of Methodism, pietism, Anabaptism, and Puritanism. As a result, these theologians and pastors began to produce theology with explicit contextual concerns, addressing situations of marginalization, deprivation, wars, and impoverishment in the Americas.

In the second chapter, “Mutual Perceptions,” he provides a panorama of the socio-political relations between the United States and Latin American. The narrative skillfully demonstrates why one finds certain theological loci, missionary priorities, and pastoral concerns different from the north (USA). It also allows the reader to trace the controversial and politically complex realities that gave Latin American evangelicalism a distinct shape over against the established evangelical priorities in the United States.

The third chapter, “The Two Congresses of 1969,” examines two important Protestant gatherings that set the mission and theological agendas for large sectors of Latin American: CELA III (Third Evangelical Latin American Conference) and CLADE I (First Latin American Congress of Evangelization). Salinas examines the formation of these two congresses by reviewing personal correspondence, articles, sponsorships from the North, and the interpretation of these congresses by leaders in the USA and in Latin American. Salinas correctly suggests that these gatherings are indispensable for understanding “the development of an autochthonous evangelical theological production in Hispanic Latin America in the 1970’s” (p. 49). For instance, CLADE I was convened under the sponsorship of the Billy Graham Evangelistic Association as a response to CELA III. Why? Key evangelical leaders in the North perceived it to be a liberal congress with communist tendencies due to its relationship with the World Council of Churches. However, although CLADE I represented itself as a clear evangelical presence in Latin American, it was not yet a fully Latin American affair. The foreign interests of its sponsors dominated its agenda and themes. Nevertheless, the reactions provoked by the congress served as a catalyst for the formation of what is arguably the most important interdenominational evangelical movement in Latin American.

In Chapter four, entitled “The Fraternidad Teológica Latinoamericana—FTL,” Salinas delves into the formation of the Latin American Theological Fellowship (FTL), and its impact on Latin American evangelical theology (p. 83). The FTL was an interdenominational effort, established for the advancement of theological reflection with a strong missional orientation. More than a dozen nationalities and several denominations were represented. After first affirming a firm commitment to the Bible, its goals were to tie a commitment to social transformation as a necessary implication of Gospel proclamation. This would be called “Misión Integral” or Holistic or Integral Mission (p. 118). Noteworthy scholars such as John R.W. Stott, Carl F. H. Henry and Leon Morris were important collaborators.

In chapter five, “Latin American Theologians in International Forums,” Salinas focuses on the rise of two prominent Latino scholars, René Padilla and Samuel Escobar, and their international contributions at the International Congress on World Evangelization (ICOWE) in 1974. From within their own evangelical milieu, these pastor-theologians elaborated upon the nature of the Christian Gospel. These men re-conceptualized evangelism as a holistic proclamation with its inseparable social dimensions. Salinas assesses the mixed reception of FTL’s participation by highlighting the complex dynamics between theologians in the majority World and in North America.

Chapter six, “CLADE II—Huampaní, Peru, November 1979,” explores CLADE II. Distinct from CLADE I, it was the first congress with a completely indigenous ethos, reflecting the concerns of a large majority of evangelicals in Latin American, as well as solidifying the FTL as the premier forum for theological reflection in the region. Salinas chronicles the congress’ critiques of North American evangelicals. While there was gratitude and appreciation for the efforts of many missionaries who shared their lives, the shape of evangelical missionary theology, the congress suggested, was strongly tied to political conservatism. Furthermore, it was accommodating of imperial interventions in the region, while also culturally alienating with paternalistic attitudes towards Latin American cultures.

These six chapters accomplish a great deal for advancing our understanding of the evangelical priorities in Latin American. Specifically, Salinas offers the reader a solid account in giving attention to the following: the connection between social, political and theological aspects, his research on personal correspondence of key thinkers from the North and South, the documentation in English of official evangelical confessions, and the contribution of the FTL to the broader international evangelical community. Two contributions should be highlighted: First, members of the FTL saw the proclamation of the gospel as inseparable from the social and ethical responsibilities of the church. At the same time, they were critical of liberation theologians who reduced the gospel to social ethics. Secondly, the FTL coined the term “Misión integral” (holistic mission) which is now a type of lingua franca in evangelical missiology. In the decades to come, as the global conversation matures among evangelicals from different regions of the world, Salinas’s book will be an important signpost in this journey.