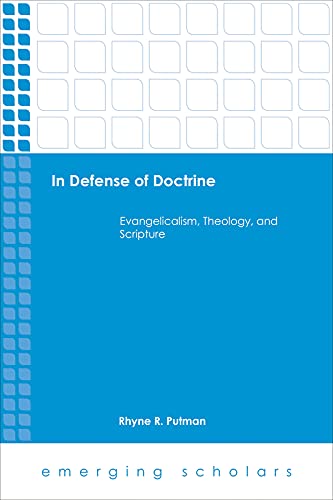 In Defense of Doctrine: Evangelicalism, Theology, and Scripture

Rhyne Putnam sees the historical phenomenon of doctrine, or more precisely “the issue of doctrinal continuity” (p. 370), as “the problem of evangelical theology” (p. 20, emphasis original). His assertion would be difficult to debate, as this problem pulsates throughout contemporary scholarship. Many espousing modern hermeneutical theory “have served systematic theology with divorce papers” (p. 178); at the same time many evangelicals continue to cling to propositional theology despite ferocious waves of scholarly opposition. Putnam has stomach for neither position, both of which he considers unbiblical. He reneges any “uncritical Biblicism that conflates one’s interpretation of Scripture with the inspired text” (p. 16) or “reduce[s] doctrines to propositions or rules” (p. 323), and he simultaneously rejects the alleged “radical discontinuity between the beliefs of first-century faith communities and the apologetic works and creeds put forward by patristic and medieval theologians” (p. 325).

Seeking a via media, Putnam sets out on an ambitious, if not courageous, quest: to demonstrate that modern hermeneutical theory opposes neither orthodoxy nor the development of evangelical doctrine, but, on the contrary, provides a most reliable tool for affirming historic and ongoing doctrinal development. “Evangelicals can commit to the task of constructive theology and maintain continuity with the revealed teachings of Scripture, and hermeneutical theory provides a way to make a case for this continuity” (p. 327). Insisting that the Bible is a “theodrama,” he openly rejects both hard “propositionalist” theologizing (p. 296) and “totalizing schemes” (p. 324) such as covenant theology and dispensationalism (p. 295). With Thiselton and Vanhoozer as his primary interlocutors he taps numerous hermeneutical models and metaphors, synthesizes them and applies them, and thereby seeks to defend the development, growth, and progress of doctrine (p. 325).

Putnam first summarizes Thiselton: “revealed truth … ‘arise[s]’ in the contingencies of history” (149). Less “disclosure” than dynamic reality, theology bears “certain transforming effects” (p. 131). In other words, the changing horizons of human interpreters force a “hermeneutical dialectic of question and answer to the development” of doctrine (p. 159, emphasis original). Putnam’s conclusion? “Doctrines are provisional, contingent, and action-guiding public commitments that develop in the context of Christian life” (p. 171), and come about as “an ongoing, life-related dialectic between revealed truth and expectation that remains open to God’s new and future acts in the world” (p. 145). Appreciative of much from Thiselton, Putnam draws more from Vanhoozer’s “theo-dramatic approach to Christian doctrine” (p. 175) and use of speech act theory. The performative action of words, their illocutionary force, shapes each interpretive community. Vanhoozer’s dramatic hermeneutical metaphors emerge: the “script” of the Bible requires “improvisation” and “reincorporation” (pp. 198–200). To these metaphors Putnam adds his own improvement, “rehearsal” (p. 204). He then summarizes the utility of these metaphors: “the true value of the theo-dramatic model is in its normative direction for doctrinal development” (p. 207), whereby the interpreters improvise by “relating the situation in front of the text to the theo-drama within the text” (p. 253). Interpreters must employ “imagination as a vital tool for doctrinal understanding” as they rehearse their theological reflections (p. 299, emphasis original).

In chapter 7, Putnam helpfully speaks of “dispositional” belief, by which he offers partial explanation for theological continuity over the ages. For example, though not all in church history have known the term homoousios, “one does not need to maintain consciously the proposition that Jesus shares the same metaphysical substance with God the Father … in order to affirm it when presented with it and its conceptual framework for the first time” (p. 372). The hypostatic union per se was a new development, but appeared in keeping with the “pattern of judgment practiced by writers of the New Testament” and cohering with a believing “disposition” (p. 373). Thus doctrinal continuity prevails according to the biblical text when later interpreters coopt contemporary terms and concepts to reframe theology. Scripture functions as a tuning fork, attesting the theological expression in the believer’s heart because it sounds with biblical timbre.

These useful insights, however, expand in less persuasive directions. Situating theological continuity in patterns of judgment, illocutions rather than locutions, human improvisation and imagination rather than revelation and illumination, Putnam erects an inescapable theological tentativeness, despite his pleas to the contrary (pp. 316–21). “Critical hermeneutical realism means that doctrines derived from the interpretation of Scripture are held both provisionally and as cognitive statements about God and the world” (p. 389). He calls for “humble agnosticism” on less perspicuous texts and “humble affirmation” of clearer ones (p. 390). Putnam puts final hope in hermeneutics: “humility in doctrinal development means acknowledging that God has revealed himself, that we can have confidence in our ability to interpret his revelation with his guidance” (p. 390, emphasis added). All knowledge is evidently a product of human interpretation, so that the interpreter is not only caught between the two worlds of ancient text and contemporary context, but is also trapped in a cocoon of provisionality. The critical realist must insist, provisionally, I suppose, that all knowledge is provisional. But to assert the absolute provisionality of all theological knowledge lacks biblical support, and humility does not entail provisionality. In fact, epistemic provisionality where God has spoken clearly lacks humility. Is the task of hermeneutics hermetically sealed from surety? Is the divine Source of language unable (or unwilling!) to communicate substance substantively in his revealed Word? Though sharing Putnam’s distaste for timeless propositional abstraction, I fail to see how the provisional status produced by hermeneutical hegemony upholds “the faith once for all delivered to the saints” (Jude 3), “the deposit” of truth (1 Tim 6:20; 2 Tim 1:14).

Furthermore, it appears that Putnam has inverted perspicuity and perspicacity. The clarity of the Bible is not the happy product of hermeneutical feats, but the very grounds of hermeneutical endeavor. Putnam celebrates the “astonishing” theological common ground between the Protestant traditions (p. 395). But this solidarity stems not from the effectiveness of human interpretative efforts, but from God’s capacity to communicate to mankind exactly what he intends. God is understood because he has made himself understandable; he is not understandable because he is understood. While certain biblical themes are less clear than others, God has not left his children in the throes of epistemic contingency. Only by a more robust consideration of the nature of Scripture as divine, the Spirit-wrought unity of the biblical text, the functional usefulness of perspicuity, and the paradigmatically critical doctrines of inspiration and illumination will we undertake the hermeneutical task properly.

To wrap up, notable elements of Putnam’s project deserve praise. The book flows with sophisticated yet strikingly accessible, and even at times whimsical, prose. Putnam communicates complexities with verbal ease, making the book a reading pleasure from start to finish. Even though the work engages sophisticated hermeneutical themes, the reader enjoys a clarity-rich analysis and synthesis of Thiselton, Vanhoozer and other scholars. As the title of his book makes explicit, Putnam sets out to preserve orthodoxy, to which he consistently affirms his own commitments. Indeed some his hermeneutical insights and applications helpfully answer important questions about the growth of evangelical theology. At the end of the day, however, I fail to see how his critical realism and hermeneutical provisionality functionally deliver a reliable defense of doctrine. The preservation of orthodoxy must draw upon something other than the method espoused here, as the hegemonic hermeneutical paradigm cannot sustain the load.