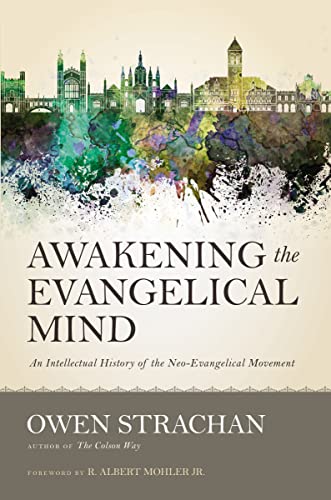 Today, scholars such as Alvin Plantinga, Nicholas Wolterstorff, Mark Noll, and James Davidson Hunter openly declare their evangelical faith in the secular academy while contributing important research to their respective fields. Owen Strachan aims to explain the roots of this recent re-emergence of evangelical intellectualism with his study on the history of the neo-evangelical movement. He argues that this “mid-century attempt to reengage the life of the mind represents the most significant intellectual development among American Christians since the institutional heyday of the 18th and 19th centuries” (p. 25).

Strachan’s book begins with a biographical study of Harold John Ockenga, the senior statesman of neo-evangelicalism, whose orthodox but intellectual and culturally aware Christianity led to the founding of many institutions and influenced a number of leaders within the movement. Ockenga was a reformed minister influenced by the holiness movement and educated at both Princeton and Westminster Seminary. He firmly believed that Christianity and intellectual pursuits could, and should, go hand-in-hand. Strachan connects Ockenga to the group of scholars he calls the “Cambridge evangelicals.” This group of evangelicals attended Harvard (and Boston University) in the 1940s and includes Carl F. Henry, Edward John Carnell, Kenneth Kantzer, and George Eldon Ladd. They and their peers entered the elite university in order to gain training and the credentials that would allow them to contend with and evangelize the “liberals” in the secular academy.

Ockenga and the Cambridge evangelicals represented a “profound counter-move to the anti-intellectualism of their peers” (p. 72). This anti-intellectualism was at least partially rooted in the fears of parents who saw their children leave the faith after attending secular institutions. The proliferation of Bible colleges in the 1920s and 1930s was a safe alternative for students who wanted the experience of college without the intellectual risk. The Cambridge evangelicals bucked this trend, which set the stage for renewed evangelical engagement with the academy. Strachan spends the rest of the book narrating the institution-building endeavors of these men as they founded the National Association of Evangelicals, Fuller Seminary, Christianity Today, the Evangelical Theological Society, and the failed Crusade University.

Strachan is associate professor at Midwestern Baptist Theological Seminary, former director of the Carl F. H. Henry Institute for Evangelical Engagement, and holds a Ph.D. from Trinity Evangelical Divinity School. His background reflects the influence of neo-evangelicalism, but the book is fair in its assessments of evangelicalism and evangelicals. For example, when explaining the Cambridge evangelicals’ sudden interest in attending Harvard, Strachan admits that World War II “created openings for students that Harvard would otherwise have rejected” (p. 77). Strachan makes every effort to provide a balanced account of the strengths and weaknesses of neo-evangelicals.

This book excels in lucidly narrating and weaving together the histories of these men. It also engages with many different scholars of the history of American evangelicalism. Throughout the book, Strachan explicitly responds to Molly Worthen, who argues that evangelicals have experienced an ongoing “crisis of authority” leading to “anxiety” and “animosity toward intellectual life” (Apostles of Reason: The Crisis of Authority in American Evangelicalism [New York: Oxford University Press, 2013], 2). For Worthen, this crisis is rooted in evangelicals’ undue allegiance to rationalism and the inerrancy of scripture. Strachan responds to these claims by arguing that “this shared project [evangelical intellectualism] faltered because of a lack of confidence in biblical authority, not because biblical authority as a concept is unworkable and untenable in light of secularity” (p. 173). Sometimes the evidence used in these two books is the same, yet interpreted very differently. Whereas Worthen uses George Ladd’s tenure at Fuller Theological Seminary to exemplify the seminary’s lack of tolerance for ideas that did not toe the fundamentalist line, Strachan uses Ladd’s work as an example of Fuller’s culture of academic freedom. This reader suspects that both accounts contain a seed of accuracy, and perhaps Worthen’s and Strachan’s books should be read together in order to gain a more accurate picture of the strengths and limitations of neo-evangelical intellectual pursuits.

Strachan’s study could be strengthened by closer attention to definitions, especially his use of the terms “life of the mind” and “evangelical.” In the conclusion, he traces the “evangelical mind” back to medieval universities, the Protestant Reformation, and countless theologians and philosophers including Augustine and Aquinas. Many historians, including Mark Noll and David Bebbington, have argued that “evangelicalism” as a movement did not begin until the eighteenth century, and was therefore a much more recent phenomenon (David Bebbington, Evangelicalism in Modern Britain: A History from the 1730s to the 1980s [London: Routledge, 1989], and Mark Noll, The Rise of Evangelicalism: The Age of Edwards, Whitefield, and the Wesleys [Downers Grove, IL: InterVarsity Press, 2003]). Were the ideas of neo-evangelicals an inheritance of older, orthodox Christian scholarship such as that of Augustine (as Strachan seems to assume), or more modern revivalistic evangelicalism (rooted in ideas of pietism and the enlightenment, as Worthen contends)? This is an important historical question that Strachan’s research only begins to acknowledge.

Awakening the Evangelical Mind will serve as a great resource for evangelicals, especially reformed evangelicals, looking to understand the roots of their own movement. By bringing Ockenga and the Cambridge evangelicals together, it builds on the work of historians such as Garth M. Rosell and George Marsden. Its excellent bibliography will also enable interested readers to dig deeper into the wealth of scholarship on evangelicals during the 20th century.