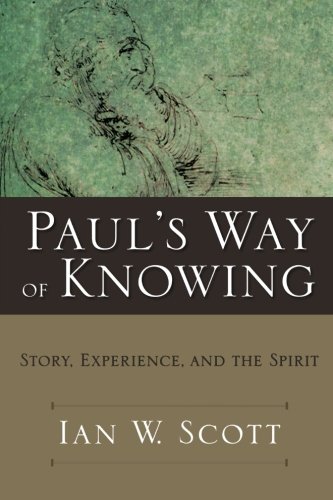 Paul’s Way of Knowing: Story, Experience, and the Spirit

Ian Scott, associate professor of New Testament at Tyndale Seminary in Toronto, has contributed an interesting study of Paul’s epistemology with Paul’s Way of Knowing. Originally published in 2006 as Implicit Epistemology in the Letters of Paul by the esteemed German academic publisher Mohr Siebeck, Pauline scholars in particular and NT scholars in general should welcome this Baker Academic edition. In reality this monograph should also be of interest to Christian apologists, philosophy students with an interest in epistemology, and those interested in the intersection of theology and philosophy.

Paul’s Way of Knowing begins with recognizing a dilemma which Christianity has faced from its earliest days. The Christian looks like an ignoramus when judged against the backdrop of Greco-Roman standards of rationality. In reckoning with this larger background concern, Scott considers “how, Paul, as the most influential Christian thinker in the first century, assumed he could know about God” (p. 2). Scott begins his study with an overarching introduction (pp. 1–12) which explains the plan of the book and offers some caveats about the study. These caveats reveal what the book is about (and what it is not about). Scott is concerned with Paul’s “implicit” epistemology, not a comparison of Paul to other contemporaneous thinkers nor is the author concerned with Paul’s conscious theory of knowing nor with how Paul came to his understanding. Scott is concerned to “bring to the surface his tacit assumptions about how people come to knowledge” (p. 11).

Scott divides the book into three parts: Human reason in Paul’s letters; the structure of Paul’s knowledge; and coming to knowledge in Paul’s letter to the Galatians. Part one consists of three chapters in which Scott seeks to exhibit what Paul explicitly says about human reasoning. He turns to the two passages where Paul discusses human knowing (or not knowing as the case may be), Romans 1:18–32 and 1 Corinthians 1:17–2:16. Paul clearly ties human knowledge in these texts to the moral or ethical condition of the human knower. This leads to a consideration in the second chapter of the broader picture of Paul’s thinking about ethicizing and theologizing and the role of conversion in these processes. Heavily weighing in these discussions is Paul’s hermeneutics of the cross which Scott deals with in the third chapter. Here the author looks at various scholars and their views of this crucicentric interpretive grid.

The second part of the book addresses the structure of Paul’s knowledge. Scott addresses Paul’s knowledge of “mundane” affairs in the fourth chapter. In the fifth chapter the author details the nature and extent of Paul’s theological knowledge. The narrative shape of Paul’s knowledge comes to the fore here and will remain with us for the rest of the study. Paul’s way of thinking exists in the form of a story. This narrative structure carries over into the sixth chapter on Paul’s ethical knowledge and the way roles in the story provide the appropriate shapes of ethical character. In other words, the NT saint embodies a role akin to that of an OT saint. Chapter seven, the concluding chapter of the second part of the book, concerns Paul’s experiential knowledge within the narrative structure we have become aware of earlier in the study. Here the author reckons with Paul’s knowledge of authority and personal relationship in general and the apostle’s knowledge of God and Christ in particular.

The third part of the book provides a test case of Paul’s implicit theory of knowledge in his letter to the churches of Galatia. Chapter eight deals with Paul’s reading of the world within the narrative structure of knowledge. Chapter nine wrestles with “interpretive gaps” at the heart of Paul’s argument in Galatians, specifically issues related to faith versus works of the law and the faith of/in Christ debate. The tenth chapter addresses the coherency of the reconfigured story. That is, Paul reveals that the story can and is changed as the drama of redemption unfolds. The final chapter of part three, chapter eleven, focuses upon “re-emplotting” the Galatian audience. The story is reconfigured and so there needs to be a resettling of believers into the changed narrative environment involving the antithesis of flesh and Spirit, identification with Christ, and the relation of Israel’s past and current ethics. The book concludes with a reconsideration of the narrative form of Paul’s knowledge, gaps in Paul’s discussion of knowledge, and further dilemmas.

Scott has given us much food for thought here. The author is most assuredly correct when he points out that Paul’s understanding of human rationality is tied to the moral condition of the human knower (pp. 15–48). Humans as made in God’s image are a unified whole. The question revolves around whether the human knower is converted or not. The knower is either orientated in sin, curved in on oneself, or is regenerated and turned toward God in Christ with the enabling power of the Holy Spirit. The human knower’s rational faculties are not bypassed or crushed but are enlightened and renewed so that they function properly (to use Christian philosopher Alvin Plantinga’s language). In other words, the human knower is either in sin and all his or her faculties are infected or he or she is in Christ by the Spirit and is oriented towards the glory of the Father.

The author is also correct that human knowing for Paul (and the Scriptures as a whole) cannot be abstracted from the story of the creation, fall, redemption, and consummation. In other words, humans know whatever they know in the context of an unfolding drama. Within the Reformed tradition, this insight has contributed to the rise of covenant theology and more recently the redemptive historical theological mode pioneered by Princetonian Geerhardus Vos. This entails the fact that the redemptive drama is unfolding or is progressive. The great story has a beginning, a middle, and an end. The story is headed somewhere. Paul’s thinking reflects this biblical reality. The story is not running pall mall into oblivion but is heading to its consummation in the new heavens and new earth wherein the saints will have unending fellowship with the Triune God of Scripture.

Ian Scott’s study would have been enriched with a consideration of Paul’s explicit theory of human knowledge as well as his implicit theory. Scott’s study is rich in and of itself, but the addition of Paul’s explicit epistemology would only strengthen the argument. The argument would also be enhanced with an explicit recognition of the whole of Paul’s literary corpus. A truncated corpus yields a truncated model of Paul’s implicit theory of human knowing. Additionally, the apparent embrace of a primarily coherentist epistemology hamstrings the value of the study. The coherence theory of knowing (and of truth) needs to be complemented with a biblical correspondence theory of knowing. To put it more boldly, the coherence and correspondence aspects of human knowing need to be set within a biblical epistemology which Paul surely maintained. For instance, does not Paul’s discussion of the reality (extra mental) of Christ’s resurrection in 1 Corinthians 15 require some element of correspondence theory? For Paul it did matter whether Christ was raised in the real world or not. It was not enough for the resurrection to cohere with other beliefs only. It needed to do that for sure. It needed to cohere with the biblical view of God and the progressive revelation of his saving purposes in the world which is accessible to human beings.

Scott is correct that the progressive nature of the story of redemption required reconfiguration and emplotment from time to time. But this was designed by God in advance and not in an ad hoc manner which is suggested in Scott’s logic. This is not to say Scott thinks God’s or Paul’s theory of epistemology is ad hoc. But it strikes this reader as a consistent outcome of Scott’s narrative of Paul’s implicit theory of knowing. Finally, a consideration of Paul’s implicit or explicit theory of human knowing must reckon with the fact that Paul is a divinely appointed representative of the risen Lord Jesus Christ and so a study of his thought is not just of interest to historians or other antiquarians but is essential to the life of the church and life of the Christian. It is, in a word, authoritative. Paul is not just one individual among many. He is an apostle.

All of this is to say that the Bible itself has an epistemology. For Paul to believe and teach what he knows to be true requires a specific epistemology to be true. It may take laborious work to determine what that epistemology is, as Scott has done here with regard to Paul, but it is present in the text of Scripture nonetheless. None of these criticisms or observations are intended to discourage the reader from working through this text. Scott has done the church and the academy a great service.