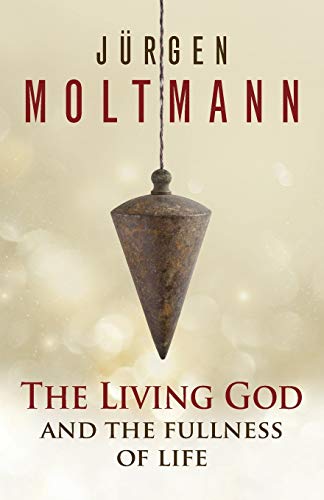 The Living God and the Fullness of Life

The Living God and the Fullness of Life is the capstone publication of one of the world’s leading theologians. Jürgen Moltmann is largely known for his academic work as Professor Emeritus of Systematic Theology at the University of Tübingen and for his multiple-volume systematic theology series, the most popular of which are The Crucified God, trans. R. A. Wilson and John Bowden (London: SCM, 1973) and Theology of Hope, trans. Theologie der Hoffnung (New York: Harper & Row, 1965). Moltmann’s writings are known for correcting the various ideological and social imbalances introduced by modernism. This perspective lends itself to a revised doctrine of creation that (among other things) emphasizes God’s immanence (in contrast to absolute transcendence), environmental care (in contrast to domineering industrialism), and physical resurrection of God’s people and the cosmos (in contrast to nihilist and escapist eschatologies). Perhaps most of all, Moltmann’s work is characterized by a powerful combination of original thought and an ecumenical spirit. In the end, The Living God serves as a sweeping visitation of major theological topics, allowing Moltmann to correct any misunderstandings others might have had of his theology over the years and distill some of the most distinctive and insightful discoveries he has made throughout his career.

“The modern world,” he writes in the preface, “takes its bearings from humanistic and materialistic concepts of life. And what men and women experience there is a diminished life” (p. 1). This grave tone initiates a discussion about the nature of Modernity and what it means for Christian life and thought. Moltmann draws attention to common, destructive patterns, asking if the “Enlightenment” is really just that, and highlighting the elementary nonsense of epistemological reductionism: “It is like the transformation brought about by a conjuring trick … theology is ‘nothing other’ than anthropology; anthropology is ‘nothing other’ than economy; economy is ‘nothing other’ than biology; biology is ‘nothing other’ than neurology; neurology is ‘nothing other’ than system theory; and so forth” (p. 14). The result of systematically reducing the complex to the simple is “a world without mystery, a world devoid of surprises, a calculable world, a controlled world” (p. 17). Indeed, as later noted, the limitless application of the Roman method of divide et impera (“divide and conquer”) is supposed to be about “the truth of nature,” but perhaps one has “merely overpowered it because it was weaker?” (p. 185).

Part One (“The Living God”) gets more specific by revisiting key areas in theology proper. The Christian “living God” (a common biblical word-pair) frames Moltmann’s discussion of such topics as omnipresence, the “outpouring” metaphor in pneumatology, and divine immutability. “It is impossible,” he writes, “to consider God as being unchangeable and immovable without declaring God to be dead” (p. 36). In contrast to the lifeless models of God forged during the “Enlightenment,” the “living God is experienced both actively and passively. God speaks and God listens. God acts and God suffers” (p. 41).

Indeed, conservative theologians contending for God’s immutability in dogmatics will find Moltmann’s assessment challenging—but hopefully instructive given his larger concerns. It might be noted that Moltmann’s promotion of “fathomless astonishment” (p. 55) in theological methodology is at-home with those who would take issue with his more controversial proposals (e.g., the vulnerability of God; see pp. 37–43). Herman Bavinck, for example, shared Moltmann’s concerns about modernity and the centrality of God’s incomprehensibility in theology (the lack of which Bavinck critiqued within his own Reformed circles; see Reformed Dogmatics, ed. John Bolt, trans. John Vriend [Grand Rapids: Baker, 2008], 2:41; he famously wrote on p. 29: “Mystery is the lifeblood of dogmatics.”). We recall that for over a thousand years the mysteriousness of God was often a regular part of theology and dogmatics—until the modern era, which spawned epistemological fundamentalisms (both theistic and atheistic) that viewed knowledge and detailed discourse of God as the primary realm of unquestionable certainties. This encouraged Christians to view divine incomprehensibility with suspicion instead of acceptance. This does not suggest, however, that Moltmann’s essential approach is mystical or without convictional bite. Elsewhere, Moltmann says, “It is true that we cannot see God, yet that is not because God is so far off but because God is so close…. God is closer to us than we can be to ourselves, said Augustine … that is not only true for us ourselves, it also applies to everything God has created” (p. 170). But, for those who paint Moltmann’s approach as being perhaps too broad or open, all of these larger considerations should at least be kept in mind.

Part Two (“The Fullness of Life”) lucidly addresses the meaning of “eternal life” (ch. 4), joy and fun (ch. 5), freedom (ch. 6), friendship with God (ch. 7), love and suffering (ch. 8), the relationship between spirituality and the five human senses (ch. 9), hope (ch. 10), and eternal human life in Christ as “a never-ending festival” (ch. 11). In each area, Moltmann makes subtle and profound observations, such as:

If men and women are only guests on earth, then they are not responsible for the guesthouse “earth,” for they are only occasionally present in this earthly inn. It is impossible to ignore the inherent contempt for the earth … when I die I have no wish “to go to heaven”; I expect “the resurrection of the dead and the life of the world to come,” to put it in the Christian terms of the Nicene Creed. (p. 84)

Christianity lives in its festivals…. [Yet the] elderly rich have their cocktail parties, where courtesies and platitudes are exchanged, and everyone watches to see what the other one is doing. One no longer knows how to be festive, and one has stopped trying. (p. 93, 97)

The more deeply love draws us into life, the more alive we become, but our experience of suffering is greater, too. The more alive life is, the more deadly for us is death. That is the dialectic of affirmed and loved life. (p. 99)

Existence is more primal than nonexistence, life is more than death: first of all comes love, then grief, and hope runs ahead of despair…. Why is Christianity uniquely a religion of joy, although at its center stands the suffering and dying of Christ on the cross? It is because behind Golgatha there stands the sun of the world of the resurrection. (p. 101)

If we human beings are “a part of the universe,” we shall respect everything for its own sake, apart from its utility for human beings and shall encounter all “fellow creatures” with reverence for life. (p. 161)

If in prayer we seek the reality of God’s world, as with the first lines of the Lord’s Prayer, then prayer is the very opposite of the “opiate of the people.” It is, rather, that in prayer we begin a withdrawal cure, withdrawal from the opiates of the secular world. (p. 173)

Moltmann’s story of being a German prisoner during WWII (p. 173) was also particularly moving.

The numinous, sapiential, and lively character of the work reminds one of post-series theological digests (e.g., Herman Bavinck, Our Reasonable Faith [Grand Rapids: Eerdmans, 1956]). Despite a handful of typos (“firsr,” p. 134; “spiriuality”; p. 136; “eiher, 138; formatting, bottom p. 46), readers of all kinds—including evangelicals who may disagree on points—cannot but benefit from The Living God.