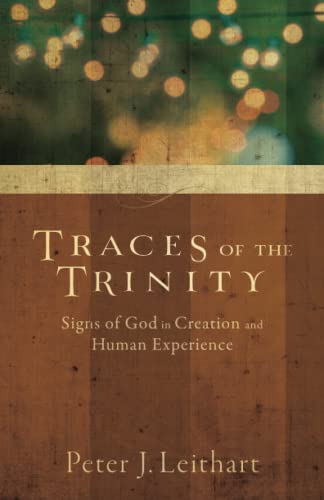 Traces of the Trinity: Signs of God in Creation and Human Experience

Are Christian doctrines merely statements that we assent to on the basis of biblical evidence or do they make more expansive claims about the nature of reality? Specifically, is the doctrine of the Trinity an esoteric datum about God that the biblical evidence forces upon us or might it offer deeper insight into the nature of the cosmos and human experience? In Traces of the Trinity, Peter Leithart makes a case for the latter by offering a thoughtful and thought-provoking examination of the stuff of life and of the cosmos through the lens of the Trinity. It is a unique and much needed project.

Leithart lays out his thesis in the preface. Guided by the Trinitarian concept of mutual indwelling (perichoresis) he aims to plumb creation and human experience for evidence of such mutual indwelling. This impulse is driven by the simple conviction that if “the Triune God created the world … that should have some implications for the kind of world that it is” (p. viii). But more than his thesis, Leithart lays out his approach in the preface and it is important to grasp. He calls it an exercise in speculative theology and it is really an invitation to look at the world differently. Accordingly, he unfolds his argument (which is not an argument in the traditional sense) slowly over the following chapters, in most cases not engaging in much explicit theologizing or application. This lack of explication may be confusing to some readers but biblically and theologically astute readers will increasingly find themselves anticipating the end long before its arrival.

He begins with a trio of chapters concerning human interaction with the world and other humans. In the first he observes that in our experience with the world there is both separation and indwelling. While we can always separate between objects and ourselves, both we and the objects are shaped by each other’s presence. Further, there are a variety of ways in which “outside” us and “inside” us are blurred, as in breathing and eating. We humans, like our skin, are porous in a variety of ways.

In the second chapter he extends these observations to human relationships. In spite of philosophies to the contrary (and Leithart interacts with Thomas Hobbes and John Locke), we humans are not fundamentally isolated individuals. Rather, society and the individual are mutually informing realities. Chapter three extends these ideas by looking specifically at the quality of mutual indwelling in sexual love. In sexual relationships more than just bodies are entwined; whole new persons are formed.

From these somewhat concrete observations, Leithart moves into a further trio of chapters that examine time, language and music for signs of this same interdependence. Humanity’s enduring struggle to understand time and change provides the ground for reflection on the way in which past and future mingle in the present. Rather than being external to us, he sees time and change as being integrated into the people and events that engage them. As our subjective experience of time during exciting or boring moments attests, “[t]ime is molded by what takes place in it” (p. 73).

uations, or the motives of the ethical actor. But basing ethical systems on any one of these is problematic. Rather, he suggests that careful ethical thought considers how these three interplay in any given situation.

It is here that he turns toward application of the principle of interpenetration that he has been observing in the world. He borrows an insight from Gabriel Marcel regarding “availability.” Being “available” means to receive situations not as intrusions but rather as opportunities to “imprint myself on the other who intrudes.” Doing so creates a moment of mutual indwelling as one both receives the intruder and makes a mark on him at the same time. This openness to the mutual indwelling of people in our lives must be extended beyond those we choose to engage with at this level, like spouse and children, to include the stranger and the enemy. He makes the connection explicit at the close of the chapter: “The nature of the universe as I’ve described it encourages an ethic of self-giving love; if we are going to live in accord with the shape of things, we need to adopt a stance of availability, of openness to others and willingness to enter when others open to us” (p. 135).

He extends this thinking to patterns of thought as well. While there is strength in clear reasoning, straight lines, and hard corners, there is more to thought than making distinctions. Many issues are plots on a continuum. Even opposites are somewhat dependent on each other for their specification. This being so, he advocates more creative reasoning and resistance to the tendency to facile separation of positions into “in” and “out,” right and left, liberal and conservative, etc.

In a final chapter the author finally becomes biblically and theologically explicit. He surveys the theological history of the concept of perichoresis and offers a whirlwind tour of the biblical testimony to it, focusing particularly on John. Scripture not only testifies to this divine interpenetration, it invites humanity into it and calls the church to be agents of that invitation.

Leithart closes the book with an epilogue in which he engages a couple of theologians regarding the legitimacy of this sort of God-talk. Since the book has not been, up to this point, an exercise in academic theological argumentation, the epilogue seems a little out of place. However, together with Leithart’s engagement with various thinkers throughout the book, it points readers to the broader theological discussion.

While the epilogue makes clear that the author is capable of heavy theological lifting, in the main the book is pitched for an inquisitive though not necessarily theologically trained audience. Leithart’s writing is clear and engaging. Where he does introduce weightier theological and philosophical materials his summaries are clearly articulated. He employs humor and cultural and literary references that explain as well as they entertain. The brisk treatment of the biblical material leaves the reader wishing for more. But this, too, may be intentional as it propels the reader to engage in their own reflection on the world, human experience, and the biblical materials in search of further Traces of the Trinity.