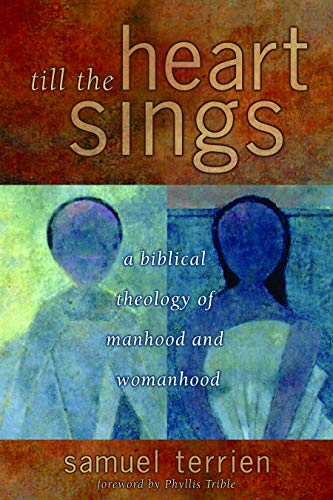 TILL THE HEART SINGS—A BIBLICAL THEOLOGY OF MANHOOD AND WOMANHOOD

This new edition of Samuel Terriers biblical theology of manhood and womanhood includes a substantial and excellent foreword by Phyllis Trible. From a feminist theologian’s perspective she assesses Terrien’s contribution, seeing him both as a feminist before his time on some counts (such as his very high view of women and his advocacy of total equality) and yet falling short of the feminist mark on others (such as his belief in the complementariness of the sexes). His aim is to build a theology of manhood and womanhood from an overview of the whole biblical narrative, starting with creation and giving due attention to the ‘unresolved tensions in the biblical books themselves’. What this means is that Terrien not only sees development in the theology of manhood womanhood, but sees canonical contradictions. His reconstruction is broadly as follows.

The Yahwist’s creation myth proclaims woman as the crown of creation and man’s ‘saviour’, deserving supreme loyalty above other family ties. This high view is developed and upheld by the prophets, the Psalmists, and the writers of Song of Songs and Proverbs. However the priestly strand of Judaism, striving to preserve national identity after the exile, ‘debased the religious status of womanhood’ with its purity laws and emphasis on the rite of circumcision as a sign of the covenant. Women were excluded from full participation in the religious life of God’s people; ‘it was only through man that she had access to the holy’. Terrien sees this dynamic of a drift towards sexism repeated in the NT. Jesus brings his disciples back to a ‘Hebraic’ and radically high view of women, dealing with the issues of ritual uncleanness which excluded them, and treating them as equal in status to men. This view is more or less upheld by a Paul who ‘sought liberation from both Jewishness and from male sexism but he did not quite succeed’. According to Terrien the passages where Paul speaks of different roles for men and women stem from a misreading of Genesis or ‘theological immaturity’. However the second generation letters (Ephesians, Colossians, Timothy and Titus, 1 and 2 Peter) betray an ‘antifeminist legalism’ that is nourished by the fear of an alien environment, just as the exilic priests let that same fear dictate their agenda. This reconstruction allows Terrien to call for a return to the egalitarian vision of Jesus and the Hebraic strand of the OT. He spends some time outlining applications of this for the ordination of women in particular.

The book has a number of strengths, particularly in some of the detailed exegesis of the OT and in Terrien’s clear defence of a God who is beyond gender.

He helpfully explains the contemporary background of fertility rites and worship of the nature goddess which led the writers of the OT assiduously to avoid feminine language for God. This is a valuable contribution to the current debate over the meaning of male language for God.

It is striking to read a book written by a theologian who does not hold an evangelical view of Scripture and yet who seeks, in his own way, to take the whole sweep of the Bible into account in building his theology. Much more valuable would be a biblical theology of manhood and womanhood which takes into account the different voices of Scripture and the different contexts in the development of the narrative, without pitting them against each other. Terrien’s attempt shows that that is no simple task, but if the whole Bible is God’s Word it is both possible and vital in order to tackle the contemporary questions of biblical womanhood.