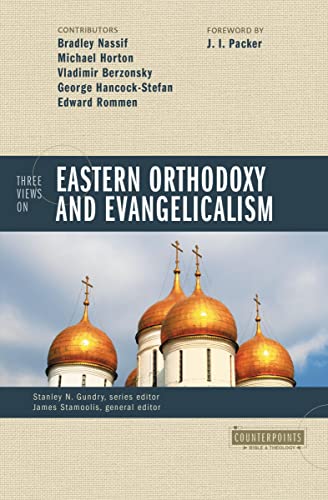 Published in the ‘Counterpoints’ series, this volume examines the compatibility of evangelicalism and Orthodoxy. It is an invaluable text-book for engagement between the traditions.

Bradley Nassif (Orthodox) provides a massively erudite presentation that demonstrates his extensive and sympathetic awareness of the history and praxis of both his own tradition and evangelicalism. He suggests that compatibility exists since Bebbington’s four characteristics of evangelicalism are to be found within Orthodoxy and contemporary shifts within the former (specifically the move from when Packer in the Introduction refers to reformational-Reformed and baptistic-Weslyan traditions) are potentially congenial to rapprochment to Orthodoxy. Overall, he argues evangelicalism relates to Orthodoxy as minimalist to maximalist: the former contained within the latter since Orthodoxy has embraced evangelical perspectives within a more cosmic christology and broader ecclesiology. Thus, compatibility exists in so far as evangelicalism grows into the more fully-fledged Orthodoxy.

Michael Horton (Reformed) speaks of his having ‘enjoyed a deepening appreciation for the wisdom of the Christian East’ (143). He acknowledges elements in Orthodoxy that are congenial to his own perspective. However, the two traditions are incompatible; partly on the basis of differences over Scripture and tradition, but mainly in the conflicting soteriologies. He argues that Orthodoxy fails to develop an adequate understanding of sin and, consequently, rejects juridical categories and collapses justification into process of theosis so that the former is the goal not the basis the latter.

Vladimir Berzonsky (Orthodox), bewailing division, is equally convinced that the two traditions stand on ‘opposite shores of the theological Jordan’ (198) and, fundamentally, for the same reasons. Thus, he avers that sola gratia is the ‘core of Protestantism’, (171), whereas Orthodox Trinitarianism and its associated anthropology provides the ‘possibility to receive the very uncreated energy of God’ by opening oneself to ‘union with the Holy Trinity through incorporation into the Godman, Christ’ (172).

George Hancock-Stefan (evangelical Baptist convert from Orthodoxy) and Edward Rommen (Orthodox convert from Evangelicalism) position themselves between the earlier contributors. The former writes auto-biographically and, mainly, in response to folk-Orthodoxy. He, however, also recognises the gulf that exists between a movement that places ‘supreme importance’ on ‘sola fide, sola gratia, and sola Scriptura’ and one that sees the Reformation as an irrelevant inter-western discussion around a faulty Augustinian-inspired anthropology.

Rommen helpfully suggests that a way forward may be to distinguish those factors that might facilitate compatibility (shared biblical texts, belief in the final authority of Scripture, the role of the Holy Spirit) or render it unlikely (culture boundedness, personal prejudice and specific teachings of the church). He also adds that different levels of compatibility (actual, limited and the absence of) might be identified. For him, the major obstacle is the Eucharistic differences.

A final essay by the editor James Stamoolis (convert to evangelicalism from Orthodoxy) notes that conversion in either direction is usually grounded in the perceived shortcomings of one’s current tradition and a desire to seek truth, the original, meaningful worship or worship that appeals to the senses.

The various discussions that follow each presentation are conducted graciously. They highlight the fact that the two traditions still have a tendency to misunderstand one another. Neither side entirely escapes from dealing in ‘straw men’ nor freeing themselves from ‘cultural captivity’ in their statements. Berzonsky adds, ‘we simply don’t know enough about one another’ (267). Nevertheless, within the context of the present book it is Nassif and Rommen who are the most sure-footed: perhaps being a minority group in a dominantly Protestant culture helps. It also challenges evangelicals to get more effectively inside of the head and the heart of Orthodox belief in order to sharpen and nuance dialogue.