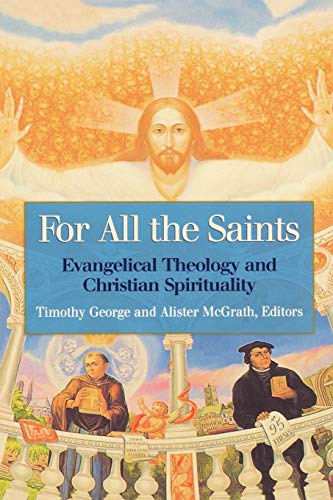 FOR ALL THE SAINTS: EVANGELICAL THEOLOGY AND CHRISTIAN SPIRITUALITY

Increasing evangelical interest in spirituality has, this book argues, been unaccompanied by adequate reflection on how such ‘relates to basic theological commitments and other distinctives of Christian life and work’ (1). Consequently, this volume is designed to offer a ‘personal and pastoral’ examination of the need for the ‘coinherence’ of intellect and piety (a word that Wood, in particular, prefers over the more ambiguous, ‘spirituality’). Such is undertaken by papers that offer consideration of, successively, foundational matters, biblical and classical sources, theological concerns and application. In his introductory essay, George (correctly) notes that recurring themes emerge: the need for a spirituality of obedience that embraces the whole person, that is grounded in a trinitarian faith of love and grace and that, in the company of others, sustains the journey from achievement to rest, amid suffering and conflict. In conclusion, McGrath suggests that the volume calls for an awareness of the living God based upon an attentiveness to Scripture that recognises aesthetic, psychological and sociological factors will determine and shape individual spirituality.

McGrath suggests that enlightenment-driven evangelicalism has neglected the heart and needs to ‘go deeper rather than just know more’ (13). This, he suggests, is rooted in and stimulated by good theology (Wood later suggests that a liturgical context is also vital). The former is demonstrated effectively by Bray’s study of trinitarian texts and their application to personal piety and Dawn, who from similar foundations, stresses the importance of ‘straight doctrinal bones’ (142) to a spiritual formation that escapes both contemporary idolatries and individualism and engages community.

The essays by Houston, Talbot and Willard, seek to offer an interpretative framework for evangelicals to engage the current global interest in spirituality, develop a personal and evangelical orienting spiritual perspective and stimulate an evangelical spirituality grounded in the core emphasis upon a supernaturally granted obedience in union with Christ. Miller notes that such brings with it the ‘true inwardness’ that is to characterise a biblical spirituality (his quote from Francis of Sales on p. 203 is worth the price of the book!).

More specifically, Wright’s biblical analysis of the ‘Lucan Jesus’ stresses the importance of humility and prayer in the gospel-writer’s presentation, while Todd’s historical study foregrounds the need to engage effectively contemporary culture to fulfil our obedience to Christ. Later, Dawn specifically explores the themes of generosity and peacemaking and Castlemain environmental concerns (grounded in an application of incarnational and eschatological emphases in Scripture) as characteristic of a rounded biblical spirituality. Meanwhile Smith suggests that interaction with other spiritual traditions (specifically those of the Afro-American tradition) may assist the synthesis of heart and mind. As to what a biblical spirituality might look like, especially for theologians, Williams provides an excellent analysis of the ‘down to earth’ spirituality of C. S. Lewis.

This is an important book that foregrounds the need for evangelicals to respond to the current (global) interest in spirituality and develop a biblical piety. It suggests that a Word-centred and community-inspired spirituality will embrace the whole person and the whole of life. Such will be nurtured and stimulated by engagement with other spiritual traditions. It will express itself in a union with Christ that is seen in a lifelong obedience. This will lead to a genuinely inward religion characterised by the discipline of prayer and evidenced in humility. It will be self-critical of contemporary idols and applied in sacrificial commitment to others.

If evangelicalism is to remain relevant and, more importantly, recover a truly biblical piety, it must build upon such foundations. The reviewer is grateful for this reminder and encouraged that such are recognised and being addressed.