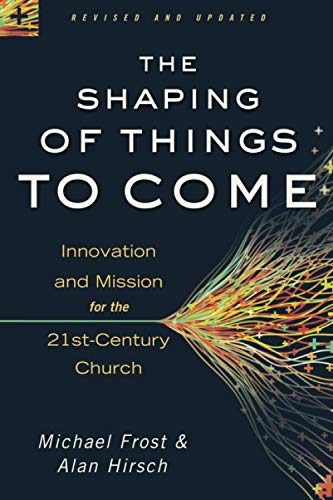 THE SHAPING OF THINGS TO COME: INNOVATION AND MISSION FOR THE 21ST-CENTURY CHURCH

Written by M. Frost, and A. Hirsch Reviewed By Paul Weston
Systematic Theology

This book from the pen of Michael Frost and Alan Hirsch outlines with analytical vigour and theological insight the challenges facing the ‘post-Christian’ church of the 21st century in the West. The writing is both passionate and energetic—not just about the theory behind the need for radical change, but also in giving living examples from the field of what change might look like in practice. Both writers are Australian in origin (Frost is founding director of the Centre for Evangelism and Global Mission in Sydney, and Hirsch is the National Director for Forge Mission Training Network—a radical training programme for church leaders working in post-Christian cultures), but their writing shows a broad experience of mission research and practice elsewhere—not least in Britain.

What they write is not for the fainthearted. In Part One we are encouraged towards an active acceptance of the fact that the church in the West is facing questions which cannot simply be answered by a continuation—however radically conceived—of the way in which things have been done in the past. As they put it (7) ‘boxlike thinking simply cannot solve the problems of the box’. The ‘box’—as they see it, is the ‘Christendom’ approach to models of church and ministry that have informed and controlled Christian thinking in the West for the past 900 years. Firstly, a ‘Christendom mindset’ continues to charm us into thinking that the relationship between church and state is ‘Constantinian’ in its significance, and therefore fails to grapple with the reality that the church has long been losing its influence at the ‘centre’ of public life. Largely as a result of this, the ‘Christendom mindset’ also tends to envisage mission as an institutional’ activity (characterised by various ‘attractional’ strategies), and has been largely unsuccessful in recovering patterns of missionary engagement which are truly ‘incarnational’ (and marked by a sense of being ‘sent’). As a result of these tendencies the good news of Christ—as embodied by churches in the West—is constantly in danger of losing its subversive NT edge.

By way of reconstruction, Hirsch and Frost argue that we must reach ‘behind’ Christendom in order to learn from the early church in its conception of ecclesiology and missiology. Accordingly, the remaining three parts of the book take up these related themes and explore them in terms of ‘Incarnational Ecclesiology’, ‘Messianic Spirituality’, and ‘Apostolic Leadership’ Along the route, there are familiar discussions of church ‘shapes’ and leadership ‘styles’, but the writers manage to include a number of fresh and stimulating insights drawn from both organisational theory and the social sciences. There are also helpful discussions about the impact and significance of ecclesial ‘life-cycles’, and a stimulating study of the implication of NT studies for patterns of leadership selection, training and deployment.

There seem to be a number of books around at the moment which address substantially the same questions as those addressed here. This is hardly surprising given the enormity of the task. But in its favour, this book does manage to take familiar debates further than many of its competitors, and it is worth your money for this reason alone. It will certainly provide plenty of useful material for the training of missionary church leaders. On the other hand, I was left wondering whether the argument for a ‘ground up’ approach to ecclesiology often characterised by discussions about the need for a return ‘behind’ Christendom) ignores the inescapable inheritance that Christendom has left the churches in the West. Perhaps it is here that the writers’ perspective fails to address the realities of the established churches in Europe. Perhaps the biggest challenge we face in these settings is to do mission in the face of cultural ‘memory’. That aside, there is much here to stimulate fresh thinking and inspire appropriate action. l recommend it.