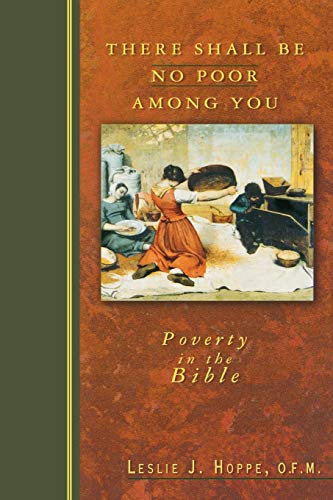 THERE SHALL BE NO POOR AMONG YOU: POVERTY IN THE BIBLE

This book by a Roman Catholic professor of Old Testament Studies examines what is said about the poor and poverty in the Bible. Six of its eight chapters are devoted to the OT, following the pattern of the Hebrew canon. Chapter 1 deals with ‘The Torah’ (the Pentateuch); chapter 2, ‘The Former Prophets’ (Joshua-Kings); chapter 3, ‘The Latter Prophets (Isaiah-Malachi, excluding Daniel); chapter 4, ‘Wisdom Literature’ (which includes material from the universally recognised canonical books of Proverbs, Job and Ecclesiastes, apocryphal books such as Sirach (Ecclesiasticus). The Wisdom of Solomon and Tobit, that are considered canonical by the Roman Catholic church, and extra-canonical works such as The Testament of the Twelve Patriarchs). Chapter 5 deals with ‘The Psalms’ and chapter 6 with ‘Apocalyptic Literature’ (including Daniel, which is dated in the Maccabean period, material from the Dead Sea Scrolls and the pseudepigraphic Sybilline Oracles, 1 Enoch and The Psalms of Solomon). Chapter 7 deals with the NT in 21 pages and chapter 8 looks briefly at the ‘Rabbinical Tradition’. The volume is completed with a ‘Conclusion’, ‘Notes’, a ‘Select Bibliography’ and a very useful ‘Scripture Index’.

There are obvious points in this volume at which an evangelical Protestant could take issue with Hoppe, such as, his critical framework of OT history, his inclusion of apocryphal books as canonical Scripture or his description of Colossians and Ephesians as pseudo-Pauline—even though he refers to quotations from both letters in the section on Paul without any suggestion that they may not be Pauline. From a non-partisan perspective the inclusion of material from pseudepigrapha could be questioned, although there is some justification for its inclusion since the NT may well reflect inter-testamental as well as OT thinking. It is also difficult to see how a chapter on ‘The Rabbinic Tradition’ fits into a book on ‘Poverty in the Bible’.

Mercifully the transgression of one’s partisan shibboleths became a peripheral annoyance in the light of the depth and breadth of the treatment of the OT material on the poor and poverty. I have been convinced for a long time that the God of the OT patriarchs, Moses, the prophets, the psalmists, who is also the God and Father of my Lord Jesus Christ, acts out of compassion to redeem fallen human beings because he is also a God of justice. He saves us from sin that we might do justice on earth and that must mean standing, as God does, with the poor who epitomise the consequences of unjust human action. Poverty is an affront to God’s justice. The poor have too little because some demand too much—an uncomfortable truth that rich evangelical Christians in the West are very reluctant to face.

In a review of Craig Blomberg’s Neither Poverty or Riches: A Biblical Theology of Possessions(Themelios 25:2. February 2000, p. 74) I noted the inadequacy of the section on the OT and suggested that ‘if more attention had been given to the OT the author would have ended being more positive about social action (changing structures) than he is’. Hoppe provides the adequate OT study of poverty and the poor that Blomberg lacks. If someone now asks me what to read to get a good understanding of what the Bible teaches about poverty I will recommend Hoppe and Blomberg. They need each other and we certainly need both.