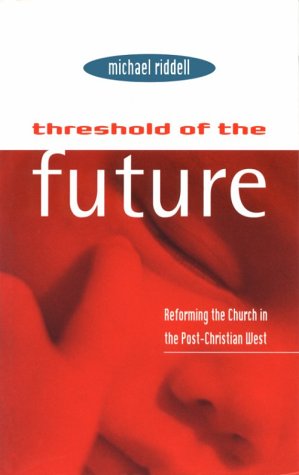 Threshold of The Future: Reforming the Church in the Post-Christian West

‘I think this is the call of God to the Western church at the end of the second millennium: to change or to die.’ (p. 2) So Mike Riddell begins this work on the state of the Western church at the end of the twentieth century. This church is so dry, irrelevant and shrinking that it is facing death. Only a radical re-thinking of what it is to be church will suffice. Acts 10 serves as a paradigm whereby the early church found itself on the edge, and so began to live ‘outside the box’ in which it had placed itself.

In the course of this lively and provocative book, Riddell takes a look at Scripture, apathy, holiness, spirituality, and of course postmodernism. To speak positively of the book, Riddell is radical and creative, and he writes with an enthusiasm and passion often lacking from such works. He rightly identifies many issues facing the church, and calls Christians to take their faith to those excluded from our structures, with our middle class values, apathy, over-rationalistic faith. His emphasis on community is a much needed call, and the ending of the book, giving accounts of various radical communities, is informative and challenging. Riddell is certainly on a mission.

Unfortunately, there is a great sense of baby and bath water throughout. Most of his discussion on the Bible is based on Tomlinson’s The Post-Evangelical, and although Riddell helpfully isolates the dangers of the classical evangelical approach, twentieth century theology (and the challenges of liberalism that have been seen in the UK at least since the World Wars) makes his analysis over-simplistic. If only it were so easy to claim that the Bible is not the word of God, but rather contains the word of God. As for tire ‘cerebral captivity of the Bible’, there are many involved in the academic study of the Bible who not only study but live it. Moreover, they remain committed to living the Bible story which both is and becomes the Word of God.

Similarly, yes there are churches which thrive on power, but not all. Yes, some people take separation from the world too far, but not all—many are holy yet involved (the biblical image of ambassadors could have been more helpfully explored). It is a shame that the old issue of incarnation versus inculturation is never thoroughly dealt with by Riddell. Similarly, in his account of post-modernity, an exploration of the relationship between symbol and story, and story and meaning, would have been constructive. There are some dubious statements made in the book—that pre-Reformation creeds were ‘narrative and fiduciary’, whereas those post-Reformation are ‘abstract and contentious’ (p. 112); that we must drop the ‘them’ and ‘us’ categories from mission, despite the Scriptural categories of light, darkness, belief, unbelief etc.; that the empty cross of Protestantism portrays docetism (p. 123); that truth is not propositional, but rather personal (p. 155) (as if such a separation were possible); that the Spirit can be played off against Scripture (p. 172); and that relationships are in contradistinction to the imparting of information (p. 174).

In general Riddell does well to recognise some of the weaknesses of the evangelical church. Yet somemust be the operative word, for these problems are some problems for some churches in some situations. In being a prophet of doom, there is much danger in over-generalising, and in attacking a Christianity that many of us in lively, relevant and thriving churches will not recognise. There is no doubting that the church must do much to ensure its relevant and truthful witness in a Post-Christian West. Riddell has alerted us to the task, but it is doubtful whether he provides the right path forward.