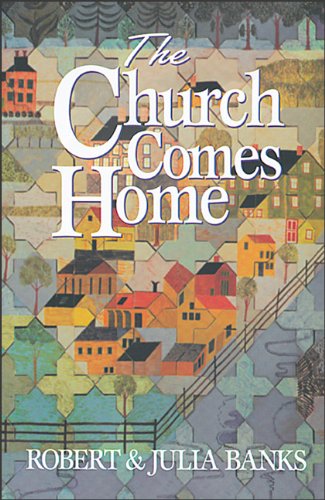 Robert and Julia Banks see the home as the natural base for the church. They argue that non-home churches fail to provide adequate community life. Most churches are too big to offer the family commitment, mutual care and accountability necessary for community: ‘most (members) have only a limited knowledge of one another’ (p. 31). Ministry from the front suppresses participatory worship. The authors look back to the model of Acts 2:46: ‘in the larger temple based meeting there was teaching by the apostles and broader fellowship with other believers. In the smaller house—or apartment based meeting they praised God and ate a common meal’ (p. 27). ‘Considering the size of average fist century houses … there were probably twelve to fifteen meeting in the ‘church in the house’ and no more than sixty to eighty as ‘the whole church’ (p. 29). Paul’s approach to ‘church’ is described as homelike, holistic, participatory and outgoing: characteristics best nurtured in groups of no more than twelve adults or about twenty in total (with children). A church with house groups is not adequate; the small groups should be transformed into home churches. Instead of a sermon, each member of the group can contribute. An ‘agape meal’ is central. Members may have differing views of its significance: they could come from all denominational traditions (p. 9). Outsiders may join in the meal (p. 42). as may children. Members choose the how, when and where of baptism: some may want infant baptism, others believers’ baptism (p. 187). There is no need for formal leadership. Suitably gifted people may be seen (informally) as the ‘pastoral core’ of the group; ‘gate-keepers’ are mentioned (p. 182), but no definition provided.

A church too big for a home is too big. Churches should start small; the authors once started a home church with five adults and three children, and prayed that God would send no more for a few months while they got to know each other deeply enough: ‘rather like a young married couple deciding not to have children immediately …’ (p. 116),

A growing church should plant another one. Home churches should sometimes meet with others. ‘Home church based congregations’ are a ‘cluster of independent home churches that meet together regularly and have some common objectives’ or else a local church ‘made up mostly of home churches’. Relatively little space is given to precisely how these wider groups of home churches function.

The strength of this book is the commitment of the authors to community life: members giving practical, emotional and spiritual support to one another. The chapter on church history traces the importance of small groups in the past. This has been comprehensively done by Richard Lovelace (Dynamics of Spiritual LifePaternoster, 1979) whose more subtle treatment shows that genuine community has been experience within a variety of church structures (cf. Lovelace p. 167). There is one chapter on the Biblical evidence: a more thorough argument is found in Paul’s Idea of Community: The early house churches in their original setting(R. Banks, Eerdmans, rep. 1988). Here Banks argued that the appointment of elders in the Pastoral Epistles were ‘the first tentative steps away from Paul’s idea of community’ (p. 198).

The remaining eight chapters are based largely on testimonies of home church members. Individuals find traditional churches lacking communal life: they find home churches to provide it. Many questions remain. There is no clear definition of what a church is. Questions about orthodoxy are seen as unhelpful, the only basis seems to be ‘a common experience and love of Jesus Christ’ (p. 186). Why are there no testimonies from members of churches with thriving small groups? Such testimonies might well reveal that the best features of home churches (genuine community and every member ministry) are also to be found in non-home churches where there is spiritual vitality.