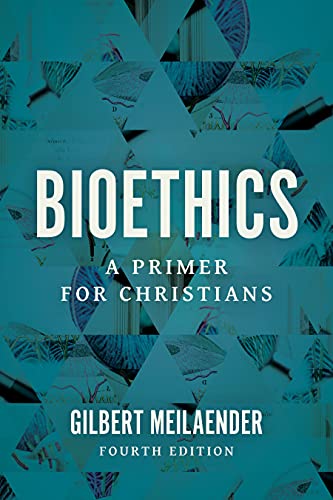 I initially approached this book with more than a little scepticism. Could any book of only 120 pages comment meaningfully on a dozen of the days most prickly bioethical issues? The subtitle ‘A Primer For Christians’ was surely a euphemism for ‘We’ve Bitten Off More Than We Can Chew’. This view was compounded when the introduction to the book (written from an American perspective) contained a factual error about the grounds under the 1967 Abortion Act for an abortion in the UK.

As I read on, however, I increasingly warmed to the book. Despite, perhaps because of, the brevity I found myself thinking more deeply about the issues covered than I had for some time—even if I did not eventually agree with all of the points presented. I was struck by the subtle changes that accompany the shift from talking about procreation to talking about reproduction. I thought some interesting and utterly plausible nightmare scenarios were presented in the chapter on prenatal screening, and the chapter on refusing treatment helpfully untangled the web surrounding when it is and when it is not appropriate for a doctor to withhold a potential treatment, and indeed for the patient to decline a proposed regime.

There was one chapter, on human experimentation, where the author, echoing uncritically something he had read in the New York Times, made big play of the fact that only 2 or 3% of adults needing treatment enter themselves for randomised trials where there is a possibility that they will receive a placebo rather than the drug under development. This was contrasted with the fact that 60% of children suffering from cancer are treated in clinical trials and taken to show that we are willing to play more fast and loose with the lives of others than we are with ourselves. This is an unfair comparison because participants in paediatric oncology trials rarely, if ever, receive a placebo.

For the most part the arguments in the book are put pragmatically from a Christian viewpoint, rather than being explicitly theological (I counted only nine Bible references in the work). That the theology is assumed rather than spelt out is not necessarily a bad thing (the benefits of brevity have already been discussed). There were nevertheless times, notably in the author’s apparent rejection of organ donation, that I wished we could see more of the invisible skeleton on which the argument was being fleshed out.

Given the content of the book, it might better have been called ‘Medical Bioethics’, because all of the material covered is directly related to the ethics of humanity in the face of changes in medical science. Inevitably there were other issues which I would like to have seen under discussion. Even under the tight criteria of the book, we might have had mention of the prospects of xenotransplantation (the human use of animal organs) and the impact of genetically-modified foodstuffs—two areas where we may yet have a chance to be pro-active rather than re-active. A wider definition of bioethics could usefully have seen coverage of other aspects of genetic engineering, animal experimentation, even the appropriate use of the medicines we do have in the face of increasing antibiotic resistance.

In short, this is a flawed yet helpful read. It is a good starting point for those who have not given much prior thought to issues of bioethics but, by its own admission and design, it is not an exhaustive treatise on the subject.