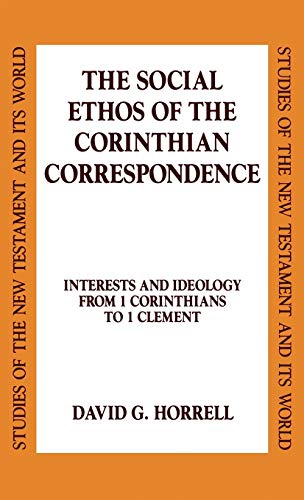 The Social Ethos of the Corinthian Correspondence, Interest and Ideology from 1 Corinthians to 1 Clement

The sociological study of the Pauline corpus can be said to be one of the fastest growing trends in all of NT studies. The seminal works in the early 1980s by scholars such as G. Thiessen and W. Meeks have stimulated a wide variety of studies, some more fertile than others. Certainly the most fertile area within the Pauline corpus has proved to be 1 Corinthians, which has produced no fewer than some fifteen significant doctoral theses involving Paul, the Corinthians, and the social sciences, and a variety of commentaries, such as my own Conflict and Community in Corinth (Paternoster, 1995). Into this already well-trod track comes the revision of the doctoral dissertation of D.G. Horrell, done at Cambridge in 1993 under the supervision of Andrew Chester.

Horrell sets out in the first two chapters, which are methodological in character, how he intends to approach the subject, namely by following the suggestions of the social theorist Anthony Giddens, and in particular Horrell seeks to use Giddens’ structuration theory. For readers unfamiliar with this particular theory, it involves not a particular sociological model but the investigation of a body of material over a period of time, seeking to see how certain basic resources and rules of a community are applied and then reapplied as situations change. Rather than applying a static model such as sect theory, Giddens’ approach is to suggest that there is a process of change and adaptation always going on in a living community and so one needs to see how the community’s resources and rules are used in this situation of flux. This in fact leads to some significant results when Horrell examines first the canonical Corinthian letters and then the somewhat later letter of Clement to the Corinthians, usually called 1 Clement. He is able to show, I think convincingly, that while Paul himself is engaging in a social critique of some of the dominant values of the culture, trying to get his socially higher status Christians to adopt a more Christ-like model of living and relating to those less fortunate, Clement on the other hand seems to be simply endorsing the existing social values of the culture and seeking to create peace in the fragmented Corinthian community by baptizing the existing social status quo, urging quietism and good behaviour in relationship to the dominant social institutions of the Roman world including government and the traditional patriarchal household structure. Horrell is again, I think, quite right to conclude that while Clement’s work is aptly described by Thiessen’s term love-patriarchialism, the work of Paul himself is not fairly described by this term. Indeed Paul is busy deconstructing some of the major assumptions of his patriarchal world, including the assumption that women should not be active participants in Christian worship and ministry.

Horrell’s work, however, is not without its flaws. There is especially the problem that despite his desire to use Giddens’ analytical approach he never does the proper background work to make such an analysis of 1 Corinthians convincing, for he does not deal with the resources and rules that Paul is drawing on. He says nothing of consequence about Paul’s use of the Jesus tradition and other early Christian traditions in 1 Corinthians, and so he does not demonstrate how and in what way Paul is appropriating and reapplying his Christian theological and ethical resources. Indeed, valuable as the analysis in chapters 3–5 is as a sort of summary of the state of sociological discussion of this Pauline material (which in itself makes the book worth reading as a precis of the subject, though there is nothing particularly new here if one is already conversant with the relevant literature), actual contact with Giddens and his theory really does not become apparent until Horrell tries to show the developments from 1 Corinthians to 2 Corinthians 10–13 and then to 2 Corinthians 1–9 (he thinks these are two separate letter fragments written in this order) and then on to 1 Clement. The analysis of 1 Corinthians suffers for not being read in light of the aforementioned background traditions. Good contextual exegesis of 1 Corinthians does not in itself constitute a social analysis à la Giddens.

Themelios readers will perhaps find it a little too convenient that Horrell argues that 1 Corinthians 14:34–36 is not Pauline, a conclusion that better facilitates his portrait of Paul as a social engineer. Yet it must be said that a proper reading of these verses in their immediate literary context could have led to the conclusion that Paul is simply correcting an abuse by some women, not laying an all-encompassing prohibition, as 1 Corinthians 11:2–16 makes clear he was not. The fact that some Western manuscripts move these verses to the end of the paragraph, is no argument for their omission, as no manuscript of the Pauline corpus omits these verses. Transposition is an argument for lack of understanding by an editor of how verses fit a context, not a sufficient argument for interpolation. The theory of several fragments in our present 2 Corinthians is also not uncommon but it also has no textual basis, and Horrell does not deal at all with the rhetorical arguments which suggest that 2 Corinthians is a unity, nor does he adequately deal with the arguments that suggest that 2 Corinthians 10–13 must follow 2 Corinthians 1–9 to make good sense of this material, as most scholars would maintain.

Horrell’s analysis of 1 Clement is telling and convincing and in itself makes the book worth reading. He shows how indeed the more radical teachings of Paul (and behind him of Jesus) have been domesticated for the sake of peace with the world and unity within the community. The re-patriarchilization of the church is already in full swing when this document is written, and the loss of eschatological sense of how the gospel transforms the world’s structures is telling.

This book is indeed a technical monograph, full of Greek and scholarly discussion, but it is also a worthwhile study, even for the student just wanting to get a taste of what the sociological study of Paul’s writings is like. There is a very ample bibliography as well for further study. Horrell has made a useful contribution discussion of our most well-known of Pauline congregations—the church at Corinth, and he has shown something of how its social problems continued to recur, not least because once the apostle passed away, it was down to the local leadership to carry things forward. Not surprisingly they did not always grasp the more socially radical and world-changing vision of the Apostle. I would commend this book to upper level college students and those pursuing master’s degrees or divinity degrees at theological college. They will discover that this line of approach to Paul is fertile, not futile.