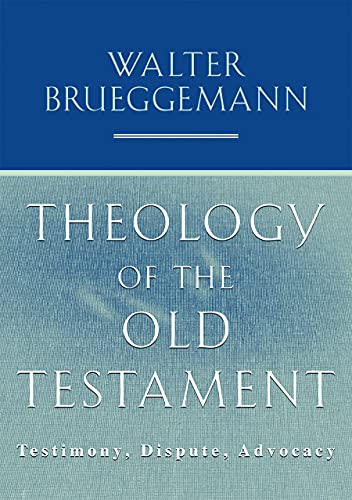 This is an important book, the first major systematic theology since Eichrodt and von Rad to integrate contemporary concerns with the comprehensive witness of the OT Scriptures. Its size is certainly comparable to, if not larger than, those multi-volume works that defined OT teaching for the mid twentieth century.

Like many such works, the opening section reviews work done in the field since the Reformation and Enlightenment. These 114 pages form a virtual monograph on the development of the subject. But what is surprising and disappointing here and throughout the book, in the midst of a huge array of secondary literature reviewed and examined, is the virtual absence of any evangelical theologian. In a text written in America, where fifty million claim evangelical status of some sort, the silencing of this minority group is a betrayal of the volume’s agenda.

Using the image of a trial, Brueggemann first examines Israel’s testimony from several angles. The first and longest of these is the ‘Core Testimony’. In this section the customary characteristics of God are rehearsed in terms of verbs, adjectives, and nouns. Alongside these is an examination of lesser-used nouns such as healer, mother, and shepherd. The study of Israel’s ‘Countertestimony’ is shorter than that of the Core Testimony, yet far more significant in terms of the issues that it raises. Brueggemann deals with texts that raise basic questions about God’s presence and reliability, particularly Job and Ecclesiastes, in which the reliability of God is questioned and never established. Leaving aside the possibility of other interpretations of Job and Ecclesiastes, their canonical context allows for an amelioration of the stark messages which Brueggemann reads from them. It is this context, however, that Brueggemann refuses to consider, preferring to let the texts speak forcefully but in isolation.

The section on Israel’s ‘Unsolicited Testimony’ focuses on current practical issues. The partners of Yahweh are presented as: Israel, the human person, the nations, and creation. Regarding Israel, there is the question of Christian supersessionism. Despite Galatians 6:15–16, Brueggemann insists that Judaism and Christianity share the hope of a common God (true) and a common life (not clear). The chapter on the human person, understood only in terms of community and relatedness to God, raises questions of sexual and economic ethics. That on the nations and their relationship to God raises issues of international ethics. Finally, Brueggemann contrasts the OT testimony regarding creation with the modern ideology of scarcity/self-sufficiency and its denial of brokenness, and affirms reason and consumer resources as the answer to human need. Human brokenness, characterised by failure, stupidity, incompetence, and guilt, needs divine healing. These are major concerns for the contemporary church. One may question the title ‘Unsolicited Testimony’—surely ‘Partners’ would be better (even though it would deviate from the titles of other sections). Nevertheless, this section clearly contains theological implications that are most important for ethics.

In the final section on ‘Embodied Testimony’, Brueggemann reviews the traditional institutions that comprise Israel’s life: Torah, king, prophet, cult, and sage. The Torah with its Mosaic authority appears primary, but is always available to new interpretation. The kings lead Israel to justice, while the prophets summon it away from its failures and back to its true identity. The cult enables Israel of the monarchy and of the exile to live out its ‘odd’ or ‘alternate’ life of exclusive loyalty to Yahweh. The sages guide Israel in understanding the natural theology of creation and gradually use this to point to Torah as the true basis for all wisdom. While the messianic hope of a future king may have remained in the exile, its rationale is nowhere explained. This important concept deserves more elaboration than the five pages devoted to it.

Brueggemann picks up the plurality of OT voices in the summarising conclusion. Although it may not be possible to go all the way to an undiscriminating pluralism of voices among witnesses, the OT has an enduring message regarding a transcendent holy creator God who has entered into an ongoing relationship with his people, which calls them beyond the acquisitive concerns of this world to love of neighbour and love of God. In this Brueggemann has identified a key message of the OT for the end of the twentieth century and the beginning of the next.