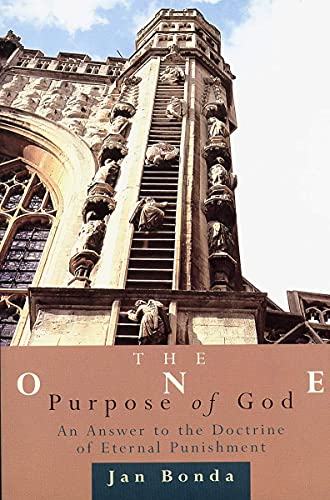 The One Purpose of God: An Answer to the Doctrine of Eternal Punishment

Jan Bonda who died in 1997 was for many years a pastor in the Netherlands. Throughout his life he was deeply troubled by, as he puts it, ‘the gloomy doctrine of eternal punishment’ and so, upon retirement, he began a serious study of the Bible’s teachings on hell and final judgement. The results of his labours are found in this book. He concludes that the traditional church with its doctrine of everlasting punishment for the majority of humankind is not only unthinkable, but unbiblical. Bonda cannot imagine that the same God who commands us to love our neighbours could ever possibly ask us to concur with their endless tortures.

More poignantly, Bonda asks, ‘How can I love him with all my heart and at the same time keep silent when he predestines my little daughter to eternal damnation?’ (29). Something is desperately wrong, and Bonda thinks he knows what it is. None of the traditional, horrific teachings about eternal punishment comes from the Bible. In fact, the biblical writers believed just the opposite. They believed that God ‘desires everyone to be saved’ (1 Tim. 2:4), and hence the title of the book, The One Purpose of God.

Throughout this work the reader gets the impression that Bonda writes not from theological curiosity, but from inner passion. The issues truly bother him and he is honestly trying to find answers that satisfy. In his first few chapters he makes the case for the unreasonableness of the traditional view, both by giving personal illustrations and by examining the beliefs of church fathers such as Origin and Augustine. From here he moves on to the OT and then to the main thrust of his book, an analysis of Paul’s letter to the Romans. Nowhere, concludes Bonda, does Scripture support the outrageous doctrine of eternal punishment. Rather, God’s intention is to draw all humanity to himself: ‘God in Christ wants to save the entire human race’ (105). If someone has not had proper opportunity to embrace Christ in this life, or even if he has flatly rejected God’s mercies, he will be given ample opportunity to repent and turn to Christ in the afterlife. For God ‘death poses no limit to what he can do’ (108). God is God of both the living and the dead.

Although Bonda writes with sincerity and purpose, many will be disappointed in his presentation. From the philosophical point of view a much stronger case for universalism is made in the earlier works of H.H. Farmer, The World and God, N. Berdyaev, The Destiny of Man, and J. Hick, Death and Eternal Life. Equally, many will find the biblical support for universalism (which purports to be the strength of this book) has been done more thoroughly by E. Fudge, The Fire that Consumes and N. Punt, Unconditional Good News.

Readers will find a number of Bonda’s arguments lacking in historical understanding. He acknowledges, for example, that Jesus does talk about eternal punishment, but suggests that the idea of everlasting punishment ‘was so totally foreign to the thinking of the early church’ that endless punishment never entered their heads (72). In fact it was quite the opposite. The largest and most popular group of Jews in first-century Palestine were Pharisees who expected the souls of the wicked to be eternally punished (Josephus, Ant8.14, War 2.163). When Jesus talked about eternal punishment, his Pharisaic audience would have understood him to mean endless suffering.

Second, Bonda makes it sound as if the doctrine of eternal punishment were a later church invention: ‘Eternal damnation was first taught by Augustine’ (12). He ignores the consistent testimony in the first half of the second century that shows post-apostolic Christians as having a firm belief in eternal, conscious punishment for the wicked (Ign, Eph 16:2; Diog 10:7f; 2 Clem 6:7; 17:7; Mart Poly 2:3; 11:2; Apoc Pet 6).

Third, in trying to make the case that ‘all Israel’ in Romans 11 includes the entirety of Israel (179–82), Bonda seems unaware that everywhere else prior to the writing of Romans, the words ‘all Israel’ refer to Israel as a corporate body, not as individual Jews. This would bolster the usual arguments (against Bonda) that Paul is using ‘Jews’ and ‘Gentiles’ as collectives in Romans 11.

Students and educated laypeople interested in universalism will profit from this book. At times the translation reads a bit awkwardly, but theological jargon is kept to a minimum and scholarly points relegated to footnotes. Certainly, no one will fault the kindly spirit Bonda brings to the task.