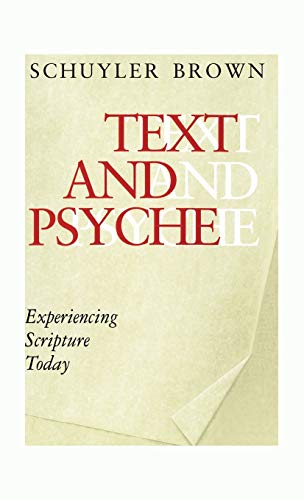 The axe is at the root of the historical critical tree.

Schuyler Brown’s new book will inevitably be seen as a reworking of Walter Wink’s explosive 1973 tract. The Bible in Human Transformation; indeed Wink’s back-cover commendation ensures this. As such it offers us an equally invigorating survey of the same problem which exercised Wink: how may the transformative power of the Bible be experienced after the desert of historical criticism? Twenty-five years on, and thus with postmodernism deftly bracketed out of the way, one has to say that not much has changed. The question is, then, whether Brown has succeeded in pointing a way ahead in the wake of Wink’s famous declaration of the ‘bankruptcy’ of historical criticism. I suggest that he is successful in some ways, but frustrating in others.

The introduction, ‘Reading the Bible in a Changed World’, is masterful. Brown starts with the ‘changed context’ in which the Bible is read today (a context including the predominance of pluralist religious paradigms and the rise of empiricist and historical-critical method), and then surveys various ‘reading paradigms’: the historical; the doctrinal; the liberationist; and then at greater length the ‘literary paradigm’. Here he is cautiously positive, noting that ‘the narrative paradigm has sometimes been used as a way of evading tough historical questions and of introducing doctrinal assumptions in narrative disguise’ (21). His survey ends with what one might call a ‘psychological paradigm’, although Brown does not label it such, which draws on Jung’s work to look at how a text may ‘be understood as the mimesis of the psychic processes which produced it’ (26). In a nice touch, he credits Anglicanism with the prerequisite openess to liturgical aspects of the Reformation to take on board these psychological angles.

Chapter 1. ‘Biblical Empirics’, follows this overview as something of a manifesto. Biblical empirics is proposed as the study of what actually happens when the Bible is read. Brown’s suggestion is that the essentially mystical process of personal transformation through encounter with the God behind the text is more worthy of our attention than the recovery of original or correct meanings. Devotional readings, allegorical readings and, so far as I could judge, flat-out gnostic readings are all respected, and in the inevitable rearguard action which ensues against ‘legitimacy’ (that horn of the hegemonist white beast). Brown suggests that ‘We must be prepared to entertain the dangerous notion that anyone who is affected by reading the Bible thereby demonstrates an interpretive competence’ (46).

Thus far I am reasonably persuaded, even if it seems ever elusive for a defender of this kind of interpretive realism to present non-historical-critical approaches without going overboard into a criteria-less interpretive malaise which is always very non-Nietzschean (‘the survival of the nicest’?). However, I was disappointed that the remaining chapters made only sporadic progress beyond this initial sketch.

‘Literary Criticism’, chapter 2, revisits some of Brown’s earlier work on author, text and reader, and probes more fully his introductory comments. However, I wonder if he underrates the difficulty of his closing section on how literary the Bible may be; and in his positing of ‘cognitive’ and ‘affective’ dimensions of narrative (75) perhaps a more polyvalent speech act model would avoid a tendency towards over-polarisation.

Chapters 3 and 4 pursue the less cognitive approaches via Jung and oral and aural texturing. Again there are some interesting ideas, such as the significance of word sounds and reading aloud, but sometimes the opaque mystery of Jungian analysis (chapter 3 is entitled ‘The Mysterious Revelation’) seemed to be appealed to at precisely the point where it needed clarification. The final chapter is a bizarre detour into gnostic reading habits as ‘an interesting parallel’ to biblical empirics which ‘does not prove anything’ (135). This seemed something of an anti-climax.

Brown’s rousing conclusion reminds us of the challenges, and I found myself heartily agreeing with its call for an approach to the Bible which will wait on God for personal transformation. But in some ways this simply restates the problem, and reveals that in fact the book has not taken us a great deal further down the road. While there is much that I appreciate in Text and Psyche, and incidentally it is written with a beautiful economy of expression and lightness of touch, I am not sure that Jungian archetypes represent an entirely well articulated way ahead in the promising project of biblical empirics. Perhaps a more generous estimate of historical criticism, mediated through some such mechanism as reception history, will provide a framework within which biblical empirics could flourish alongside, rather than instead of, more normative concerns such as interpretive legitimacy.

I don’t have any clear answers to these questions. The disappointing thing appears to be that Brown doesn’t either. But as a thought-provoking manifesto, this is still a valuable read.