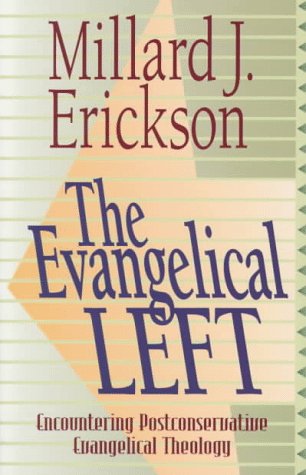 ‘The Evangelical Left’ is Erickson’s term for a North American movement which others have dubbed ‘postconservative evangelicalism’. He identifies its protagonists as Clark Pinnock, John Sanders, Stanley Grenz, Bernard Ramm and James McClendon. He also detects a postconservative agenda at key institutions like Intervarsity Press, Fuller Seminary, and Christianity Today magazine.

Erickson casts postconservatism as a reaction against the Enlightenment, and most especially, the reliance of American evangelical theology on Scottish Common Sense philosophy. Where this produced strong propositionally-based dogmatics, Pinnock and Grenz in particular prefer more relational, narratively-based paradigms. Postconservatives are typically more Arminian than Calvinist more ecumenical than separatist, and more willing to dialogue with liberal, neo-orthodox and postliberal thinkers than with conservative evangelicals. As Erickson points out, these trends reflect a desire to develop theological methods suited to a postmodern, rather than a modern, world.

Erickson focuses on three key areas of doctrinal concern for postconservatives: Scripture, God and salvation. On Scripture, he shows that postconservatives support a ‘functional’ version of biblical infallibility which allows for mistakes in the text while maintaining the role of Scripture as God’s primary means of self-disclosure. While admitting that conservative evangelicals have often neglected the human side of biblical composition and intepretation, Erickson casts significant doubt on the ability of postconservatives to distinguish between ‘erroneous’ empirical information and ‘inerrant’ religious or theological statements. Serious generic problems are also exposed in their distinction between ‘narrative’ and ‘propositional’ discourse.

Erickson notes that the profile of postconservatism was most firmly established by publication of The Openness of God in 1994—a volume to which Pinnock and Sanders contributed along with William Hasker and David Basinger. Espousing a ‘free will theism’ which questions traditional attributes of God such as omniscience and impassability, the ‘openness’ view criticises these attributes for owing more to Greek philosophical categories than to the ‘Hebraic’ thought-forms of Scripture. Erickson accepts the need to distinguish biblical revelation from cultural presuppositions, but argues that ‘Greek’ models are not so alien from the biblical text. More seriously, he questions the validity of seeking guidance from a God whose will is undeveloped, or of squaring predictive prophecy with a God whose foreknowledge is conditional.

On salvation, Erickson shows that postconservatives are motivated by ‘hermeneutic optimism’ about the population of heaven. He goes on to discuss the preference of the New Left for conditional immortality over eternal conscious punishment, and charts Pinnock’s support for a ‘postmortem encounter’ or ‘second chance’. Again, Erickson finds positive, as well as negative points in all this. He admits that evangelicals have sometimes been heartless in their doctrinal treatment of ‘the lost’, but insists that Scripture is frequently pessimistic about the proportion of the redeemed, and that Pinnock’s ‘Hades Gospel’ depends overmuch on highly disputed material from 1 Peter.

Erickson is a skilful summariser of others’ views and presents those views in a thematically coherent way. He also proves an astute but generally fair-minded critic of postconservatism, although his analysis could have been integrated more fully into the body of his text, rather than appended to the end of each chapter.

Readers of this new British edition will see parallels between Erickson’s ‘Left Wing’ and recent work by Nigel Wright, John Drane, Michael Ridell and others. Postmodernity is presenting a challenge to classical evangelicalism not only in America, but across the developed world. As they respond to this challenge, evangelicals on this side of the Atlantic will find Erickson’s study to be a useful starting-point.