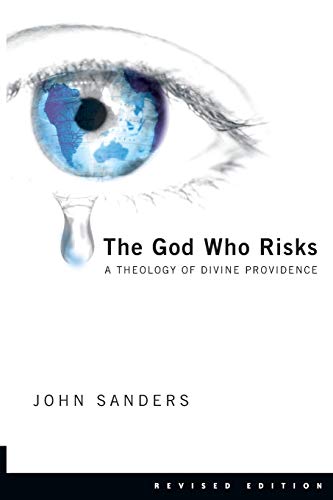 The God Who Risks

Upstream from many tormenting theological puzzles lurks the basic question of God’s nature and providence. John Sanders, associate professor of philosophy and religion at Huntington College (Indiana), joins a spate of recent theological voices in challenging the classical (often Reformed) view that God exercises sovereign control over all that occurs. He contends that the traditionally accepted divine attributes such as omniscience, omnipotence, omnipresence and impassibility are not fully compatible with an honest reading of the biblical data, are not logically inconsistent and are unable to support a viable Christian experience.

Sanders develops a case for ‘relational theism’ or a ‘risk’ view of God. In this view God engages his creation, including human life and destiny, without determining or even knowing in detail the final outcome. Anticipating rejoinders Sanders claims that this view neither diminishes God’s character nor evacuates his promises of content. God, to Sanders, is ‘omnicompetent,’ having all the strength and wisdom needed to accomplish His ‘overarching goals’ (66). Yet, God can be genuinely disappointed and surprised. Sanders states, ‘The portrait of God developed here is one according to which God sovereignly wills to have human persons become collaborators with him in achieving the divine project of mutual relations of love’ (12).

God, according to Sanders, could have created any type of world he wanted, including one in which every detail is either foreordained or foreseen. Yet, God has freely chosen to create a truly free world subject himself to that condition. For Sanders, human freedom to love God cannot coexist with any sort of divine coercion. Furthermore, God cannot foreknow what has not yet happened anymore than he can make a square circle.

In dealing with the biblical evidence Sanders challenges the claim that accommodationist language does not portray God as he really is, but only as he appears to us. Metaphorical language, he claims, may not tell all there is to know about God’s inner reality, but we must not project onto it our preconceived notions of what God must be like. Sanders asks,

If the Scripture is God’s lisping discourse to us and we have no means of observing God’s non-lisping discourse, then on what grounds do we claim that God is indeed lisping to us? How would anyone know, since we cannot observe God’s ‘normal’ discourse? (68).

In the NT Sanders sees Jesus Christ as our only epistemological axis for understanding God. He offers Jesus’ temptation, compassion and passion as evidence that God has made himself truly vulnerable to those who bear his image. Jesus’s crucifixion he understands, not as God’s original plan for dealing with human sin but as used by God to heal our relational brokenness, the resurrection then representing God’s power to respond to evil and keep human history moving toward redemption.

Sanders attempts to show that relational theism is compatible with historic orthodoxy, even citing Louis Berkhof’s belief in ‘changeable faithfulness’ (184) as evidence. He presents God as transcending the confinement of classical attributes, redeeming his world more freely than with the coercion depicted in Reformed theology and more authentically than portrayed in the passive foreknowledge of Arminian theology. Unfortunately, he occasionally argues against simplistic caricatures of ‘specific sovereignty’ views, ignoring the time-tested debates that have sought to qualify God’s exercise of providence so as to account for evil and preserve human integrity.

On the whole Sanders’ ‘relational theism’ may evade the charge of heterodoxy that some evangelicals will make. It is more than possible, however, that the logic of his case may have a retrogressive impact on other critical areas of theology. Sanders’ view of sin hardly accounts for the depths of human depravity we experience. Nor does his view of grace seem sufficiently forceful to unshackle human bondage.

Critics of this work are likely to debate Sanders’ theological method as much as his exegesis and conclusions. While he has anticipated and addressed the most predictable reservations about his argument, some critical questions remain: For example, does the risk model adequately account for all prophetic foretelling and the specific futuristic promises in Scripture? Does his distinction between the ‘formal’ freedom and ‘material’ bondage of humans allow God’s grace to function any differently than in Reformed theology and still save us?

Sanders has, nonetheless, exposed some danger points: the depersonalising risk of Reformed harmatiology, the influence of Greek philosophy on our preconceptions about God’s attributes and the sometimes crippling personal effects of overdone views of sovereignty.

Sanders’ work is far from conclusive. Yet he poses helpful questions and outlines the debate in a fresh, engaging manner. Ultimately, the importance of The God Who Risks is best captured in Walter Brueggemann’s comment on the back cover. ‘It matters hugely that in the end the God of our faith can be “prevailed upon”. ’