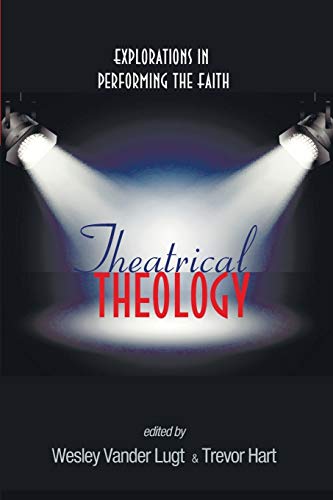 It is not difficult to see why this volume is of significant interest to a reviewer completing a thesis titled ‘A theatrical exploration of providence’. But should others not engaged in such inter-disciplinary work also pay attention? I answer with a definite ‘yes’. The volume contains essays premised on the fruitfulness of a constructive exchange between theatre and Christian theology. Most of the essays were first presented as papers at the 2012 ‘Theatrical theology’ conference hosted by the Institute of Theology, Imagination, and the Arts within the University of St Andrews, Scotland. To offer even the briefest description of all thirteen essays would take us well beyond the limits of this review. I therefore offer some comments only on what I consider to be some of the most important contributions to the volume.

The ‘What do Broadway and the West End have to do with Jerusalem?’ question should have been put to rest by now, after works such as Hans Urs von Balthasar’s multi-volume Theo-Drama (San Francisco: Ignatius, 1988–1998) and Kevin Vanhoozer’s Drama of Doctrine (Louisville: Westminster John Knox Press, 2005), but the introduction provided by editors Wesley Vander Lugt and Trevor Hart is an excellent reminder and refiner of the answer to the said question. The premise of the volume is that theology is inherently theatrical by virtue of its object, mode, and goal: theology concerns the speech and acts of God in history; it is a self-involving, provisional, and contextual exercise within the theo-drama it seeks to understand. Its end goal is full-fledged participation. Mere comprehension or contemplation will not do. On this final point, the editors highlight the affinity between theatrical and narrative theology, with the former seen as the fruition of the latter.

As a long-serving promoter and participant in the theatre-theology conversation, Kevin Vanhoozer writes on the relationship between the immanent and economic Trinity. In a chapter titled ‘At Play in the Theodrama of the Lord: The Triune God of the Gospel’, Vanhoozer argues for traditional forms of Trinitarian theism, providing nuanced corrections to the proposals of Robert Jenson and Hans Urs von Balthasar. He demonstrates that the Gospel is the dramatic representation of the Trinitarian processions, calling for ‘fitting participation’ in God’s project of reconciliation and renewal.

One of the most seminal essays is written by Trevor Hart. In conversation with Max Harris (Theatre and Incarnation [New York: St. Martin’s, 1990]), Hart argues that the Son’s permanent ‘enfleshment’ demands a serious engagement with the nature and significance of ‘flesh’, for God and for humanity alike, the results of which are highly relevant for the wider theology and the arts conversation, but also for the church’s engagement with Scripture.

In ‘Raising a Tempest. Brookian Theatre as an Analogy for Providence’ Timothy Gorringe continues his previous work on theatre and providence by drawing further analogical parallels between theatre direction, as delineated by British theatre director Peter Brook, and divine providential action. The proposal is fresh and the explanatory potential of the exercise is clear, but the present reviewer wishes that more attention had been paid to the biblical text’s depictions and conceptualizations of divine action, these then being given adequate weight in the analogical exploration. Arguably, a sustained discussion of providence within a theatrical model for theology is still sorely needed, but Gorringe’s work has provided important building blocks for the task.

Shannon Craigo-Snell’s essay opens with some refreshingly clear comments on the infamously elusive notion of performance. All present and future participants in the theatre-theology conversation will be most grateful for these. Her proposal is for a theatrical ecclesiology where church is understood as ‘a disciplined performance of relationship with God in Jesus Christ, mediated by Scripture, in the hope of the Holy Spirit’ (p. 88). In dialogue with Barth and by drawing on Peter Brook’s typology of theatre, Craigo-Snell defines and defends an ‘empty’ church, where ‘emptiness’ suggests a discipline of hope and response to the newness of God’s grace.

In Chapter 11, Richard Carter and Samuel Wells sketch a theatrical doctrine of Scripture and hermeneutics, where the Bible’s drama is not simply contextualized but projects its own reality in which it invites participation on the part of reader-performers. Particularly inspiring are the stories about the dramas performed in the Solomon Islands by Carter and the Melanesian Brotherhood, which illustrate the power of theatre to communicate the Gospel and thus to produce social transformation and compelling public witness.

A final word on the volume as a whole. All thirteen essays illustrate the potential of theatre to aid in the theological task, however widely or narrowly construed. There is however a certain methodological and conceptual looseness in the engagement with theatre across the volume. This is not unexpected in such inter-disciplinary projects, but some readers may walk away more confused than enlightened in the end. We can only recommend they revisit the eminently clear introduction to the volume while waiting, in hope, for future contributions which may tie some of the loose ends of what is undoubtedly an enriching exchange between theatre and theology.