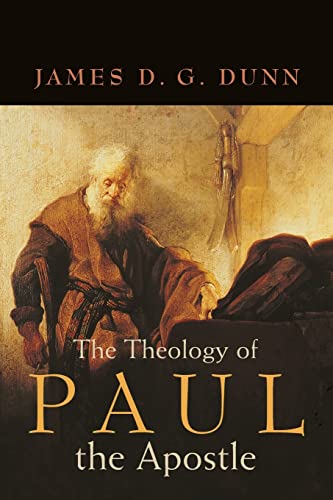 The Theology of Paul the Apostle

On the back of the book jacket, Graham Stanton calls this ‘Dunn’s best book so far’ and I tend to agree. The Lightfoot Professor of Divinity in Durham and author of such key works as Christology in the Making, Jesus and the Spirit, Unity and Diversity in the New Testament, and major commentaries on Romans, Galatians and Colossians has now drawn on his years of study to compile a comprehensive theology of Paul that should instantly take its place as the best available in the literature.

Dunn follows the general outline of Romans (a reminder of how much biblical and systematic theology has been influenced by Paul’s choice and sequence of thoughts in that one letter) and integrates key texts from the other Pauline epistles (leaving Ephesians and the Pastorals to one side as pseudipigraphic) into that framework. Ample bibliographies, footnotes and indexes demonstrate a wealth of interaction with the secondary literature, yet the main text of each chapter remains clearly anchored in the exegesis of Scripture itself and proves eminently readable.

Not surprisingly, Dunn writes as an enthusiastic participant In the ‘new look on Paul’, frequently stressing as he has in previous writings that a key distinction between Paul and first-century Judaism (and particularly between Paul and the pseudo-Christian ‘Judaisers’) was not freedom versus legalism but universalism versus ethnocentrism, especially involving the famous ‘badges of national righteousness’ of sabbath, circumcision. Torah, dietary laws and temple. Thus ‘Paul and the Law’ is treated in no less than three major places in a sequence of topics that otherwise follow relatively predictable: ‘God and Humankind’, ‘Humankind under Indictment’, ‘The Gospel of Jesus Christ’, ‘The Beginning of Salvation’, and so on.

The strengths of Dunn’s volume are too many to enumerate. I find myself in agreement over and again on most of all the key elements, few of which are new to evangelicals abreast of discussion. Important distinctives and/or emphases include: anchoring Paul solidly within the Jewish monotheism of his day, yet redefining it to make room for Jesus; preserving Israel as the elect of people of God despite their divided response to the revelation of Christ; convincingly defending the ‘I’ of Romans 7:14–25, as including Paul’s theology as summed up especially the ministry of reconciling people to God and to each other; distinguishing original sin from the original guilt and focusing on the social emphasis of Paul’s vice lists; identifying the pervasive Scriptural foundation for Paul’s thought, both in quotations and in allusions; viewing Paul’s hermeneutics as thoroughly Christocentric with the cross at the heart of his theology, interpreted as an atoning sacrifice (hilasterion); highlighting the Lordship of Christ as referring to him as ultimate master not merely God; appealing to divine Wisdom as the background for the doctrine of pre-existence; noting the distinctively Christian definitions and emphases on ‘grace’ and ‘love’ pointing out the covenantal background to ‘the righteousness of God’; showing that pistis Christou more likely means ‘faith in Christ’ rather than the increasingly popular ‘faithfulness of Christ’; aptly balancing Paul’s blend of charisma and authority, freedom and leadership, within his ecclesiology; stressing the non-sacramental nature of baptism; understanding Paul’s ethics within his ‘already but not yet’ framework; gleaning from modern sociological insights, particularly into the church of Corinth; and recognizing that there are no great signs of ‘development’ in what is a fundamentally coherent theological system of Pauline thought.

Those inclined to see in Dunn’s previous works an overestimation of the significance of first and last Adam-Christology, of ‘Wisdom’ as background for Paul’s thought more generally or of nomos as unrelentingly referring to Torah will probably raise the same criticisms here. But Dunn has not ignored his critics; he responds to them graciously, and even on so central and controversial a topic as Paul’s understanding of the Law vis-a-vis Judaism, Dunn’s views now seem more nuanced-stressing for example, that the reformation emphasis on justification by faith versus works in general is not denied by his approach. It is just that Paul’s warnings against legalism are given sharper historical focus by the more immediate and pervasive issues of nomism and nationalism. The only topic seemingly addressed in entirely inadequate detail is Dunn’s summary rejection of the ‘perseverance of the saints’—a rejection treated as a corollary of the conclusion that conversion must be interpreted within the ‘already but not yet’ framework of life between the ages.

There is also the strange tendency for Dunn and his editors to allow sentence fragments to proliferate throughout the book. Some of this is undoubtedly stylistic, but it is still disconcerting to see on page after page ‘sentences’ such as ‘A response, not a defence’ (p. 164) ‘Not a conversion from one religion to another’ (p. 179), ‘Which also means …’ (p. 206), ‘In which case it is of some interest …’ (p. 304). ‘To exercise final judgement’ (p. 310), ‘And also transformation …’ (p. 329–30), or ‘Likewise from commerce’ (pp. 329–30). In one 28 page spread, I counted six of these (pp. 536–64). In a world in which increasingly few English-language writers can unerringly distinguish between complete and incomplete sentences, modelling this kind of use of fragments for whatever reason seems pedagogically self-defeating.