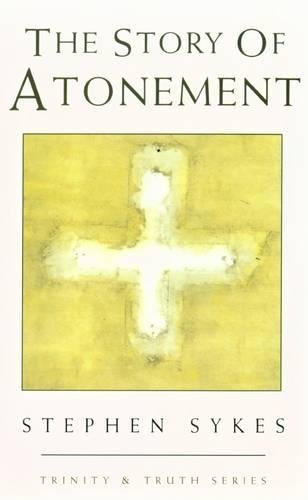 The Story of the Atonement

Without a doubt discussion of the Trinity is the current ‘in-thing’ of systematic theology. Indeed, as trends go, it has been in vogue for some time, and perhaps may begin to be on the move. However, instead of disappearing from the theological agenda, the indication is that exploration of the doctrine continues, and this generally can be no bad thing. Such exploration is witnessed to by the growth of the Trinity and Truthseries, edited by Stephen Sykes. It aims to provide the best of theological thinking on key subjects accessible to a general readership. As such they are introductory texts, intended to be open to non-specialists, relating themes in doctrine to an understanding of the Trinity. As the preface to the series makes clear, this is ‘a series of theological books written by authors convinced that there is truth to be spoken about God, and that such truth is best explored when we speak about God as Father, Son and Holy Spirit’. Certainly it is a positive thing that the theological climate makes such an orthodox aim permissible.

The first offering, by the general editor, attempts to present not a theory of the atonement, but to examine how Christians live within the story of the atonement. Examining the nature of the atonement, justification by faith, difficulties associated with ideas of merit and reward, the challenge presented by other faiths, and the practical issues of Eucharist and evangelism, Sykes skilfully guides the reader through a large number of issues. He helpfully attacks Aulen’s criticisms of the uselessness of theories, but progresses to develop his thinking in terms of the popular (and sometimes over-used) concept of narrative. Thus there are ‘a plurality of narratives for atonement’ (p. 17). Although Sykes is keen to speak against postmodernism and claim that there is a story, a meta-narrative, it is unclear where the ‘no exit’ signs for this narrative exist.

Centrally, although Sykes goes a long way to account for and understand the evangelical insistence on penal substitution, he surely puts words in the mouths of the likes of Packer when he interprets their use of ‘metaphorical’ applied to penal substitution in the following way:

This important concession is bound to imply that, in certain respects, the application of a theory of specific penal exchange to the death of Christ is not appropriate to the atonement, and there remains a dimension of mystery. In other words, the narrative of our salvation is not, in a literal sense, one of penal substitution; by itself the importance to a sound Christian theology of justification by grace to be received by faith does not give such a theology of atonement a normative status (p. 52).

Although mystery remains, the evangelical insistence has been on the grounding of the narrative, the foundation for the metaphors, and the basis for the other theories. Is one understanding normative? Not for Sykes.

On the issue of other faiths, Sykes follows a familiar inclusivist path, which may leave open the question of the nature of evangelism. He picks this up in a later chapter, and argues for an evangelism based on love, rather than fear of damnation. At least he is sufficiently sensitive to ask the question as to how this love is defined (p. 151). Evangelism, in the end, becomes ‘the process of issuing an attractive invitation to a life made up of praise in every part’ (p. 159).

Positively, Sykes makes some helpful contributions, such as the role played by a proper understanding of Christian eschatology in debates concerning merit and reward. However, in the end this is a disappointing contribution, which although opting for the use of narratives rather than theories, seems to be in danger of emptying the baby with the bath water (a danger which Sykes sets out to avoid early on by holding on to the grounding which the unique story of Jesus provides (p. 18)).

The second in the series, by Philip Sheldrake, examines the practice of living before a Trinitarian God—that is, spirituality. In one way this work is a great relief, for here is an attempt to hold together two disciplines that are often in danger of being compartmentalised, spirituality and theology. Sheldrake opens with an analysis of the Christ and Culture issue, in the context of postmodernism, and although he never seems to justify why he opts for the middle path between Christ versus culture, and Christ assimilated by culture (p. 12), proceeds to offer some helpful pointers in this area. The majority of the first half of the book is concerned with the history and rationalisation of the split between theology and spirituality, and there is much here to learn from and sympathise with. There is some use of terms which are loosely defined (‘rationalist’, for example), places where assumptions are made (‘deification’ as the basic vocation of humanity, pp. 26 and 83), and instances where the obvious is missed out (the concept of revelation in our use of language about God), but generally some extremely helpful lines are drawn to bring the two disciplines together (for example, his claim that Luther’s The Freedom of a Christian and Calvin’s Institutes of the Christian Religion are ‘fundamentally essays in “spiritual theology” ’, p. 46).

The second half of the work acts in dialogue with historical figures—Julian of Norwich, Ignatius Loyola and George Herbert, and also with the concepts of place and human identity. The studies of figures are extremely helpful in providing examples of theological spirituality, particularly the emphasis brought through Ignatius Loyola and Herbert that God loves us even as sinners. The section on place would have been enhanced by a discussion of the role of land, place and temple in the Biblical narrative (especially the relationship between Jesus and the temple). Finally, a conclusion brings a number of strands together, criticising the modern desire for spirituality, and outlining the church’s role to bring Christian and Trinitarian spirituality to that world.

Finally, Christopher Cocksworth’s contribution to the series offers an examination of worship, using worship as a way in which to view, learn about and live in the Trinitarian God. After an introduction, Cocksworth examines the origins of Christian worship (the shape and patterns of the NT church), and the role and theology of worship amongst the church fathers. Cocksworth avoids the temptation to find creedal Trinitarianism everywhere he looks, and so provides a much more solid case for the nature of the Trinitarian God being revealed through and by the worship of the early Christians. The second half of the book then examines the structure of worship, exploring the glory of God, the invitation of Christ, and the searching of the Spirit.

This volume is a joy to read. Steeped in the language and imagery of the early church and examining some of the background to worship (including attributes and figures of God, and the place of the temple) Cocksworth rightly challenges our understanding of worship as an act. In fact, his approach is rather simply summed up by the comment of an ordinand he knew, who said when replying to the question, ‘What is worship?’, that it is ‘joining Jesus as he praises the Father’ (pp. 32, 159). The church desperately needs to understand this distinction, that the thrill of worship is being invited by the Son to take part in his worship of the Father and his glory, and the role of the Spirit in worship bringing fellowship, the humanity of Christ, the proclamation of the Word, and the future to the here and now. Cocksworth closes the book with a challenge concerning the relationship between worship and mission (a closing theme common in some way at least to all three works).

In conclusion, these three very different books provide the backbone to a useful series. From this reviewer’s perspective, the series is improving as it progresses, and the most important and useful to the student will be Sheldrake’s and Cocksworth’s. It is a tribute to the publisher and the series editor that they have embarked on such a project, and the hope is that further helpful volumes will appear.