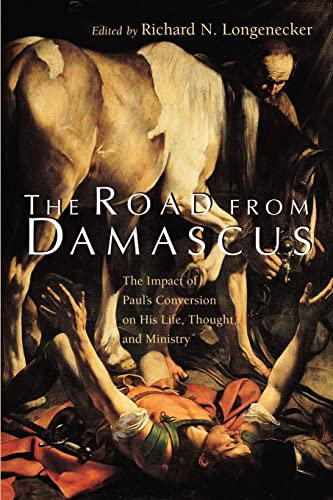 The Road From Damascus. The Impact of Paul’s Conversion on His Life, Thought, and Ministry

This represents the second volume in the new ‘McMaster New Testament Studies’ series growing out of a colloquium at McMaster Divinity College, Hamilton, Ontario. Dr Longenecker also edited and contributed to the series’ first volume, Patterns of Discipleship in the New Testament (Eerdmans, 1996). For this volume of eleven essays on Paul’s conversion, the editor has recruited top-flight Pauline scholars to address aspects of the topic in which they are proven experts. The volume brings the best work of the academy to the level of intelligent lay-people, theological students, and working ministers.

Bruce Corley traces the history of interpretation concluding that most interpreters of Paul have seen the Damascus road experience as a true ‘conversion’ despite major modern objections.

Richard Longenecker considers how Paul’s conversion affected his view of Jesus. Paul came to understand that Jesus was at the centre of God’s salvific purposes for both the creation and humanity. The gospel is theocentric, and Jesus is Israel’s Messiah, the Son of God, and the Lord of all—who acted as God’s agent. Paul presents his conversion as a paradigm for subsequent Christians in terms of his radical reorientation of thought about Jesus and the life lived ‘in Christ’.

Howard Marshall considers how Paul’s conversion impacted his eschatology. Paul affirmed that with Christ’s first coming the new age had begun, but God will consummate the arrival of this new creation at the second coming or parousia of Jesus. Marshall argues that Paul’s conversion accounts for the development of Paul’s essential eschatological convictions, though his argument for this connection is not well-developed.

Adopting the starting point of Sanders’ ‘covenantal nomism,’ Terence Donaldson sees the origin of Paul’s gentile mission in his conversion: once Paul came to see Christ replacing the Torah as the criterion for membership in the people of God, Paul saw the need for Gentiles to become full and equal members of Abraham’s family.

On the topic of justification James Dunn argues, as we have come now to expect, that Paul’s experience on the Damascus road was more a rediscovery of his ancestral roots than a radical conversion from a legalistic Judaism to a grace-filled Christianity.

Seyoon Kim finds most plausible the thesis that Paul’s metaphor of reconciliation also resulted from his theological reflections on his Damascus road experience, while supplementing those reflections with further exegesis from the Scriptures.

The editor’s son, Bruce Longenecker surveys covenantal categories of thought in Paul, finding that Jesus Christ permeates every aspect. If the covenant between God and Israel dominated Paul’s pre-conversion life, the focus has shifted after Damascus to what God has done in Christ.

Stephen Westerholm surveys the shift in Paul’s perspective on the law of Moses after his epiphany of God’s Son, and in eight theses summarizes Paul’s Christian view of the law. One needs to read and evaluate Westerholm as one decides whether or not to jump on the ‘new perspective of Paul’ bandwagon. His essay presents a different perspective from that of Dunn (in this volume) and E.P. Sanders.

In a fair and balanced way Judith Gundry-Volf sketches the tension in Paul’s writing on women and gender and how this relates to the views of his non-Christian contemporaries. Perhaps surprisingly, she shows how some of Paul’s Jewish contemporaries exhibited similar tensions in their discussions of women and gender. She observes that Paul shares with these contemporaries both the more patriarchal and the more egalitarian features of his thought. Paul does not appear to be a maverick on this score. What difference, then, did his Christian experience make? Gundry-Volf finds Paul’s ideal of one humanity without gender discrimination to be grounded in the reality of Christians’ incorporation into Christ by faith—without ‘a rejection of the body that bears the marks of gender difference’ (p. 210). With more nuancing than is found in many discussions, Gundry-Volf rejects attempts to portray Paul as experiencing a radical transformation from partriarchalism to egalitarianism, while recognizing at the same time that he can ‘burst out of a patriarchal framework’ (p. 210).

In the final essay Walter Hansen traces the impact of Paul’s conversion on his ethics as found in Galatians. Paul’s ethic of freedom declared the content of Christ’s love displayed on the cross. The moral power for the ethic of freedom to love was provided by the power of the Holy Spirit.

Though the organizing topic of the essays is ‘conversion,’ the collection of essays, crafted by such an impressive line-up of scholars, will introduce the reader—whether student or ministry practitioner—to the current state of affairs on many key Pauline issues. For a ‘what’s important about Paul and what are they saying about it?’ kind of short introduction, this is a fine collection. Its perspective is thoroughly evangelical. While its scope is limited, what it does, it does very well.