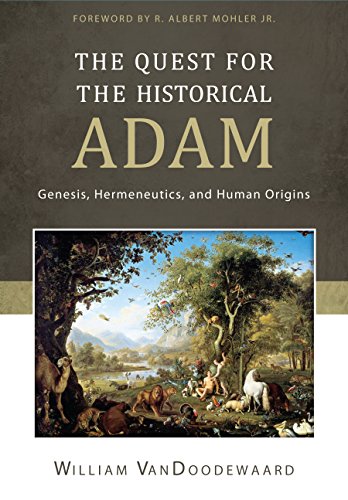 The Quest for the Historical Adam: Genesis, Hermeneutics, and Human Origins

Let me say at the outset that I’ve given a more thorough—and critical—assessment of this book in an earlier review of recent works in the human origins debate (cf. “Adam and Eve: An Evangelical Impasse?” Christian Scholar’s Review 45.2 [2016]: 165–83). For present purposes, rather than repeat myself, I’ll set aside the larger story and focus instead on VanDoodewaard’s core grievance against mainstream evangelicalism.

But first, readers should keep in mind the broader context to this book. The relationship between modern evangelicalism and young earth creationism is ambiguous—at best. In the wider academy, anyone with a whiff of “creationism” is judged beyond the pale of orthodoxy, deserving all the contempt scholars can muster. Such creationist drivel must not be tolerated within polite, sensible academic discourse; roughly speaking, that’s the prevailing attitude. Evangelical academics are mindful of the rules of the game, and many sympathize with the anti-creationist sentiment.

Even those from more confessional traditions have long made the case for a greater diversity of interpretations of the early chapters of Genesis, specifically “old-earth” or “progressive creationist” approaches (e.g., in 2000 the PCA Creation Study Committee recommended that sessions and presbyteries tolerate a range of views on creation, including calendar-day, day-age, framework, and analogical days; four years later the OPC made similar recommendations). More recently, evangelical scholars have been developing evermore sophisticated models that integrate evolutionary perspectives with Christian theology.

To chalk this all up to academic peer group pressure is too simplistic. Some of that is happening, of course, but it’s not the whole story. In light of doctrines like general revelation, common grace, and the image of God, thoughtful Christians cannot ignore scientific developments. Important hermeneutical shifts and insights have also affected the interpretation of traditional biblical passages. These and other intellectual developments have impacted how evangelical academics approach questions on human origins. Furthermore, in those congregations that have experienced the harmful combativeness and divisiveness of certain creationist apologists, pastors feel the burden to promote a diversity of viable perspectives as an invitation to charity, civility, and unity.

By comparison, those lay evangelicals—and they are many—who believe that the earth is young have become disillusioned with their professorial representatives in the seminaries and colleges; they’ve sought guidance elsewhere from independent creationist ministries who are valiantly if not stridently defending the young earth position. This “scientific creationism” movement was largely inspired by the landmark volume by Henry Morris and John Whitcomb (The Genesis Flood: The Biblical Record and Its Scientific Implications [Philadelphia: Presbyterian & Reformed, 1961]). Young earth creationism today is a global phenomenon, representing a very wide range of organizations working at different levels of sophistication and credibility. To millions of Christian lay people, such creationists are on the side of the angels, fighting the good fight of faith. Many academic evangelicals, however, seem to orbit within an entirely different universe, one in which the names of Ken Ham and Henry Morris represent a failed movement; by their lights, creationists are not worth taking seriously anyway since Ronald Numbers disemboweled the entire movement, especially in his exposé of Henry Morris’s reliance on the writings of the Seventh-Day Adventist George McCready Price and, ultimately, the visions of Ellen G. White (cf. The Creationists: From Scientific Creationism to Intelligent Design, enl. ed. [Cambridge, MA: Harvard University Press, 2006]).

Enter William VanDoodewaard, professor of church history at Puritan Reformed Theological Seminary. He knows the messy history of the debate and understands the complexities, but his book grew out of a concern with the current state of the discussion. As he sees it, the dominant historiography ignores “a long line of theologians, exegetes, and thinkers” who interpreted Genesis 1–5 as literal history (p. 8). VanDoodewaard’s book seeks to recover that tradition, in part by reclaiming a more positive (and unapologetic) use of the word “literal”—earlier orthodox believers were part of a long-standing, catholic, literal hermeneutical tradition that interpreted the early chapters of Genesis as fully historical. Even when the tradition boasted rich typological motifs, it always retained full historicity—including the special creation of the original couple, Adam and Eve, in a young earth with no evolutionary ancestors.

If such claims about hermeneutics and Genesis are not controversial enough, VanDoodewaard’s book also throws down the gauntlet to conservative evangelicals who have departed—he thinks—from this literal tradition. His account is thus a declension story, a cautionary tale. For on this telling, it was the introduction of non-literal approaches to the early chapters of Genesis (e.g., gap theory, day-age theory, etc.) that ultimately paved the way for the rise of liberal approaches to the text. To wit, there is a direct line from old-earth creationism to denying the historicity of Adam. VanDoodewaard does applaud old-earth creationists who retain a historical Adam and Eve—theirs is a lesser error—but he insists that their underlying methodological and hermeneutical moves are intrinsically unstable because of the potential to undermine the biblical text further. He is worth quoting at some length:

Along with the troubling loss of a perspicuous early Genesis is the perhaps even more troubling reality that the history of hermeneutics on Genesis and human origins, particularly in the last two centuries, reveals a repeated pattern toward an erosion of scriptural inerrancy, sufficiency, and historic Christian theology. Despite naysayers, the history of Genesis hermeneutics across the centuries does provide numerous examples of sequential changes: if these changes do not indicate a “slippery slope,” they certainly indicate consecutive slides. In the history of each of the “schools” of alternative approaches and the institutions and denominations that grant latitude to them, there is an unbroken pattern of progressive movement, initially away from the literal tradition on Genesis 1, then away from the Adam and Eve of the literal tradition toward an evolved Adam, and then to no recognizable or existing Adam and Eve at all. There have been exceptions to—and reversals of—this trend, but they are rare. (p. 279)

Don’t miss what he’s saying; these are fighting words. Scholars like C. John Collins, Wayne Grudem, John Piper, Meredith Kline, Michael Horton, and many others we could name, have all made a vital mistake in their reading of Genesis, setting in motion a process that—followed through consistently—will only lead to the further eclipse of biblical teaching. Fifty years ago conservative evangelicals were arguing for an old-earth while strenuously denying any viability to theistic evolution; today their evangelical descendants are skittish about Adam and argue for the orthodoxy of an evolutionary creation. No surprise, says VanDoodewaard—jettison the literal hermeneutic and you set up a slide to further decline.

This is no tame book (William VanDoodewaard, one imagines, has no time for Dale Carnegie). I’ve left off any critical assessment, not because none can be marshalled—again, see my CSR review cited above—but because I’ve tried to convey why VanDoodewaard’s book may interest readers of Themelios. Some may be tempted to dismiss the book, for don’t we all know the fallacy of slippery slope arguments? But dismissing The Quest for the Historical Adam would be a mistake. Pick up the book and read the argument. Many readers of this journal will likely want to argue with it and its author. As they should; it’s a controversial work, its main thesis as provocative as it gets, and VanDoodewaard should be commended for bringing an important new voice to the science-theology dialogue.