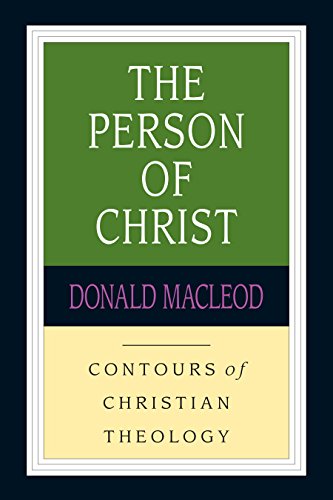 The Person of Christ Contours of Christian Theology

This is the latest volume in IVP’s generally sound and satisfying series, Contours of Christian Theology. Within the context of the series as a whole, it stands as a companion volume to The Work of Christ by Robert Letham, published some years ago.

Donald Macleod is well known in the United Kingdom as a gifted preacher and teacher, and this book will hopefully serve to bring his work to the attention of a wider audience. In it, Macleod commits himself to an exposition of classic, catholic christology while at the same time engaging some of the contemporary challenges which have been posed to such christology in recent years. His conviction is that, despite the inevitable weakness which any human doctrinal formulation inherently possessed, the language and concepts of classic christology still represent a sound and adequate statement of the biblical teaching. With this in mind, the reader will find within these pages a thoroughly orthodox treatment of all the classic christological topics (pre-existence, kenosis, the problem of historical particularity and universal truth).

The book divides into two parts, the titles of which (‘Very God of Very God’ and ‘Very God, Very Man’) reflect Macleod’s self-conscious desire to stand within the traditional boundaries of Christian orthodoxy and indicate the movement of his argument from establishing the divinity of the second person of the trinity to establishing the union and integrity of the two natures in the incarnation. Nevertheless, while remaining within orthodox trajectories, Macleod does not ignore major modern challenges—exegetical, theological and philosophical—to such teaching and is also open to learning lessons from those with whom he disagrees when he feels it is necessary.

In the context of the British scene, one of Macleod’s most significant contributions lies in his critique of the work of James Dunn who is taken to task, among other things, for his downgrading of John’s Gospel and his rather contrived exegetical methods. In addition, Dunn’s rejection of pre-existence comes in for some searching and, in the opinion of this reviewer, decisive and long-overdue theological criticism. To have the theological and exegetical case for orthodoxy on this issue laid before us so clearly by someone who has such confidence in the authority and clarity of Scripture is a refreshing and encouraging turn of events within the evangelical world.

On a more positive note, it is stimulating to find an evangelical theologian prepared to listen to non-evangelical writers and thinkers without surrendering his orthodoxy. Particularly pertinent in this context is Macleod’s interaction with the christologies of Bonhoeffer and South American liberation theologians. Here Macleod reminds the reader that christology is not simply—or even primarily—about metaphysics but about the action and example of God, something which in itself passes judgement on the world and calls Christian themselves to action. That Macleod shows that this point can be made without abandoning the traditional christological language and formulations is an important lesson, particularly for students who will no doubt be told again and again that such are inadequate for the challenge facing contemporary Christianity.

The book’s major drawback is, as Macleod himself confesses, that it is a book written in the eighties, not the nineties, and so some of the issues currently dominating christological debate are not dealt with—but those who are not so concerned with being on the cutting-edge and simply want solid catholic christology expounded with precision and wit, could do little better than start with this fine volume.