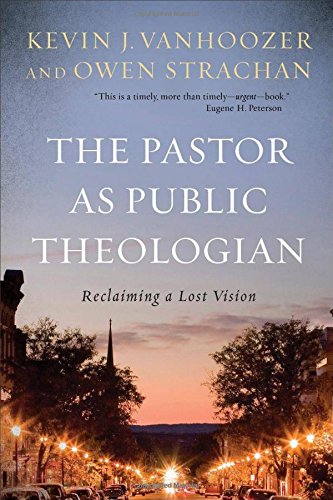 The Pastor as Public Theologian: Reclaiming a Lost Vision

Is a pastor primarily a manager? A CEO? A preacher? A counselor? A community organizer? The question of the fundamental identity of the pastor today is likely to evoke various responses.

In The Pastor as Public Theologian, Kevin Vanhoozer (professor of systematic theology at Trinity Evangelical Divinity School) and Owen Strachan (associate professor of Christian theology at Midwestern Baptist Theological Seminary) contend that pastors have been led into the wilderness of modernity and are now wandering with a faulty vision of the pastorate. Their response is to reclaim a biblical vision of the pastorate, one in which the pastor is fundamentally a public theologian. Vanhoozer explains this in three steps. “First, pastors are and always have been theologians. Second, every theologian is in some sense a public theologian, a peculiar sort of intellectual, a particular type of generalist…. Third, the purpose of the pastor-theologian being a public intellectual is to serve the people of God by building them up in ‘the faith that was once for all delivered to the saints’” (pp. 15–16).

Readers who are aware of the conventional use of the label “public theology” will recognize that the authors are using the terminology differently. In the words of the authors, “Public theology, as we are using the term, means ‘theology made up of people’: ‘God is at work to bring into being a people under his rule in his place.’ … The church—not a building but the people of God speaking, acting, and perhaps suffering—is that ‘place’ where God and the kingdom of God best comes into focus” (p. 20).

In the introduction, Vanhoozer addresses the problem, proposal, and prospect of the book: reclaiming a biblical vision of the pastor as a public theologian. Part one includes two chapters by Strachan in which he argues that the prophets, priest, and king of the Old Testament foreshadow the New Testament pastor-theologian (ch. 1) and that the pastor-theologian is the dominant understanding of the office throughout church history (ch. 2). Part two includes two chapters by Vanhoozer in which he gives the systematic (ch. 3) and practical (ch. 4) vision for the pastorate. The pastor should be seen as a “holy jack-of-all-existential-trades, charged with communicating Christ to everyone, everywhere, at all times” (p. 186). Much of these two chapters flesh out what this looks like. In the final section, Vanhoozer summarizes the book with fifty-five theses on the pastor as public theologian.

Some might question whether academics should be writing about pastoral ministry. This is surely mistaken. Amplified by modernity and increasingly atomistic approaches to scholarship, the relegation of the theologian to the academy has been an unfortunate development. Christian theologians should not only live their life in the church but also write for the church. Nevertheless, instead of trying to go it alone, the authors wisely chose to include short essays throughout from pastors, which home in on the application of each chapter. While some of these pastoral essays prove more insightful and relevant than others, their inclusion provides wisdom and perspective from the front lines of ministry.

One might ask, nonetheless: Is this an intellectual elitist view of the pastorate? The authors work hard against the impression that the public theologian is really code for membership in the “elite intelligentsia.” The public theologian, according to Vanhoozer, is not a “product of the Ivy League but homegrown, as it were, on the farm” (p. 24). Pastors need not have a high IQ, but rather a high “TQ (theology quotient).” This is an important qualification, and yet, when one looks at the pastors selected to write essays throughout the book—those who function as the models for what a public theologian should look like—one might wish that a more diverse group were selected: nine of the twelve pastors who wrote essays have their PhDs or are working on their PhDs from schools such as Oxford, Cambridge, and Princeton. This is a rather elite group (at least it appears so on paper). While this can be a refreshing corrective to the anti-intellectualism that plagues the evangelical church, for some readers this selection of contributors could seem in tension with their concern to distinguish the genius from the pastor.

At the end of the day, this book provides a timely vision for the pastorate. The Pastor as Public Theologian is associated with a broader movement, which appears to be gaining steam. For instance, see the recently published work by Gerald Hiestand and Todd Wilson (The Pastor Theologian: Resurrecting an Ancient Vision [Grand Rapids: Zondervan, 2015]) and the Center for Pastor Theologians (http://www.pastortheologians.com). In a day when the Western church has drifted toward theological anemia and many of her leaders have failed to faithfully respond to the complexities of culture, The Pastor as Public Theologian and this broader movement is offering a rich and needed vision for the pastorate.