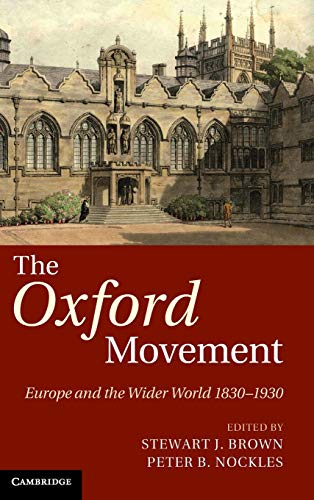 Writing in the year 2000, Professor David Bebbington maintained that the Oxford Movement, which both energized and roiled the Christian world of the nineteenth century, lived to exert an even more pervasive influence in the second century of its existence. As if to underscore that assessment, two distinguished historians of nineteenth-century Christianity, Stewart J. Brown and Peter B. Nockles, have assembled a spectrum of writers who aimed to explore the diffusion of the influence of the Oxford Movement—led by and associated with John Henry Newman, Edward B. Pusey, and John Keble—in its first century of existence within Britain, into Europe, and across the world’s oceans. This is an admirable project, which substantially succeeds in enabling a reader to grasp both the wider impact and the diverse reception afforded this movement.

Not to be passed over (because not pertaining to an identifiable geographic “destination” to which the movement travelled) is the opening prelude provided by Peter Nockles. It pertains to the Oxford college (Oriel) in which the Oxford Movement was birthed in the 1830s and which stood most to be affected by the controversies which ensued. There were intellectual influences at work in Oriel that, though they did not spawn the movement, certainly affected the cast of mind of the major players in it. We learn also that the heads of this college correctly appraised J. H. Newman as a man of great singularity—urging along tendencies they could not endorse—while this movement was in its early stages. The actual birth and expansion of the Oxford Movement stirred up in the college heads such determination to root it out that their approach may have harmed the overall standing of the institution for years thereafter.

Wales, as described by John Boneham, and Scotland, as described Stewart J. Brown, responded to the Oxford-birthed movement in comparable ways. In contrast to England, each country had Episcopalian minorities, overshadowed by Independent (Wales) and Presbyterian (Scotland) religious majorities. Greater reserve and circumspection therefore characterized the introduction of the emphases of the Oxford-based movement. Thus, for instance, while the English movement uttered sentiments hostile to the Tudor Reformation (provoking, for one, the erection of the still-standing Martyr’s Memorial at Oxford), neither the Welsh nor the Scottish expression of the movement gave out such “uncertain sounds.” Even so, the introduction of Oxford emphases into each respective nation proved disruptive, inasmuch as the Anglican evangelicalism—so loathed by Newman and his associates—was also present in the neighboring realms. The unforeseen consequence of the movement’s diffusion was the strengthening of cross-border evangelical solidarity, one symptom of which was the founding of the Evangelical Alliance in 1846. Nevertheless, in Scotland especially the Oxford Movement had a notable effect in spurring liturgical modification in the various Scottish Presbyterian churches by late century.

Rowan Strong, an Australian church historian who is known for his research in this period, demonstrates what a dilemma was posed for the friends of the Oxford Movement by the joint determination of England and Prussia to place a Protestant bishop in Jerusalem in 1841. As this was a step motivated both by Prussian-English desire to counter growing Russian influence in the Middle East and by a missionary interest, on what grounds might Newman and his circle take objection? In a word, it was prejudicial to the existing claims to Christian jurisdiction in that region exercised by Roman Catholic and Orthodox communions (which actually had adherents there). Moreover, this arrangement drew the Church of England into formal cooperation with Lutheranism, a movement that they abhorred. The case of the Jerusalem bishopric is important to the story of the Oxford Movement for what it forced into public view: the religious instincts of the movement were other-than-Protestant and contrary to Britain’s growing imperial aspirations.

Two chapters (by Austin Cooper and David Hilliard) explore the spread of the movement to Oceana. Given an acknowledged passing over of Canada and New Zealand (see p. 8) and an unacknowledged passing over of South Africa, it is a little difficult to justify this disproportionate emphasis on Australia. English-trained clergy sympathetic to the movement were present there early on, but as in Wales and Scotland, circumspection was the rule as the unbridled emphases of Newman and his associates would have proved counter-productive. Certain Anglican dioceses were, however, quite rapidly identified with the movement in an open manner and remain influenced by it to this day.

A chapter which held great promise, that of Peter Nockles on the Oxford movement’s influence in America, displays the disadvantage of having been written from the distant vantage point of the UK. One looked for, but did not find an exploration of the similarity of tendency shared with another expression of religious romanticism: the theology of Mercersberg, Pennsylvania. Research has made it plain enough that John W. Nevin, theologian of that movement, read the Oxford Tracts for the Times, and corresponded with E. B. Pusey. Again, one looked for but found no mention made of Charles P. MacIlvane (1799–1873) the doughty Episcopal bishop of Ohio, who went into print with Oxford Divinity Compared (London and New York, 1841), taking strident exception to developments in England which were by then trickling in to the USA. Such were the forces of Evangelicalism in the American Episcopal Church at this time than an inquiry was launched into the infiltration of Tractarian influence into the General Theological Seminary of New York. In sum, we are given the story of the diffusion of the movement’s ideals to young America, but little about the repercussions that followed.

The entire second half of this volume is taken up with chapter-length treatments of the relation of the Oxford Movement to various affinity groups on the Continent. This territory has not gone unexplored in past. As long ago as 1933, the Anglican bishop of Manchester, E. A. Knox, had drawn attention to J. H. Newman’s contacts with the French Catholic pro-papal Ultramontane party in his The Tractarian Movement. But the treatment is, as is to be expected, richer in the new volume under review. Readers will find especially rewarding the chapter of Albrecht Geck, “Pusey, Tholuck and the Reception of the Oxford Movement in Germany,” which demonstrates that the pietistic German theologian Tholuck (also the bosom friend of Princetonian Charles Hodge, who like Pusey had studied in Germany) was a regular correspondent with Newman’s co-laborer, E. B. Pusey, who managed to visit him in England while—on the same journey—addressing evangelical mission societies assembled at London! Tholuck was by no means the only German following English developments. Particularly in the Catholic theological faculty at Tübingen, events in England were followed most closely. A corresponding chapter by Jeremy Morris, “‘Separated Brethren’: French Catholics and the Oxford Movement,” illustrates how avidly observers within French Catholicism monitored cross-channel developments, reading Newman’s treatises when available in translation.

In sum, while this fine volume draws together many pieces of first-level research, it might have been of still-greater usefulness if it had unfolded on a different plan. The primary impact of the Oxford Movement was in English-speaking lands that were culturally and linguistically linked to Britain. When Anglican movements in Canada, New Zealand, and South Africa were in fact polarized by the arrival of Tractarian teaching and disciples on their shores, it cannot fairly be maintained that such questions require less attention than do investigations of relations with post-1870 European “Old Catholics” or empathetic Catholics in nineteenth century Belgium (subjects to which whole chapters are devoted). This focus problem will strike the non-European reader as odd. Again, the Jerusalem bishopric controversy (alluded to above) is the primary subject of two different chapters, and touched on in a third. The concern is about proportionality.

As well, one might have wished to find a greater curiosity within the volume for the question of the place of the Oxford Movement in nineteenth-century theology, troubled as it was by rationalism, higher criticism, and the expansion of the claims of science. In this matrix, E. B. Pusey’s biblical commentaries on the OT Minor Prophets would astonishingly become a standby of English-speaking evangelicals. A later Archbishop of Canterbury, Randall Davidson, was sufficiently influenced by Tractarian thinking that he opposed the inclusion of nominally Catholic Latin America within the purview of the important 1910 Edinburgh Missionary Conference. Such questions of wider influence were as worthy of attention as some given whole chapters in this volume.