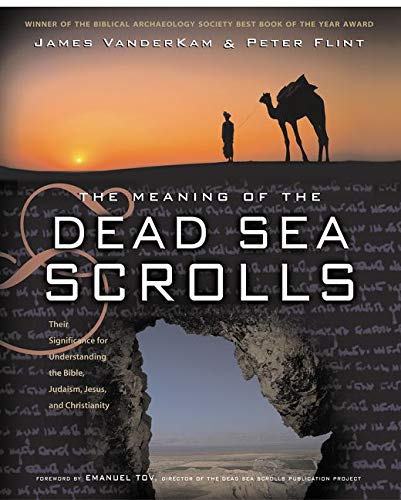 The Meaning Of The Dead Sea Scrolls; Scrolls, Scriptures And Early Christianity

These two new publications, each of which is written by internationally recognised experts, are welcome additions to the available literature on the Dead Sea Scrolls (DSS).

The book by VanderKam and Flint is a new British imprint of a book which was published in the USA by HarperSanFrancisco in 2002. As far as I can see, it does not differ in any way from the American edition, despite the different publication dates. VanderKam had already written an excellent introduction to the Scrolls (The Dead Sea Scrolls Today, Eerdmans, 1994) but here he joins with Flint to produce a superb book which has already won a ‘Best Book of the Year’ award from the Biblical Archaeological Society and which bears commendations from the elite of Scrolls scholars (including J.H. Charlesworth, D.N. Freedman and J.J. Collins) and is introduced with a foreword by Emanuel Tov. There are five main parts to the book, plus a set of appendices. Part one provides a careful reconstruction of the history of the discovery of the Scrolls, a chapter on the various methods of dating these ancient documents, another on the archaeology of Qumran and a fourth on the use of technology in Scrolls research. Part two deals with the biblical documents, with particular attention being paid to issues of text and canon of the Old Testament raised by the Scrolls. This section of the book includes some excellent discussion of various texts (e.g. Masoretic Text, Samaritan Pentateuch) and very helpful comparative tables which highlight differences between the biblical texts from Qumran and the text as it was known before the discovery of the Scrolls. The chapters in part three provide a survey of the non-biblical documents, then consider the identity of the group associated with Qumran, the belief system reflected in the DSS and the method of biblical interpretation which they exhibit. Part four asks what relevance the DSS have for our understanding of the New Testament, while part five is composed of a single chapter on the various controversies which have surrounded the Scrolls. Some of the very helpful features of this book include discussion of recent electronic resources for studying the Scrolls (such as CD-ROMs and web sites); occasional text boxes which provide a profile of a key figure or information on a technical matter, etc.; numerous clear tables; relevant and reasonably current (as of 2002) bibliographies at the end of each chapter; and frequent citations from the Scrolls. Since Flint was involved in the production of The Dead Sea Scrolls Bible (a translation of the biblical documents from Qumran) and his colleague at Trinity Western University, Martin Abegg, was a contributor to the companion volume, Dead Sea Scrolls: A New Translation, it was perhaps inevitable that most excerpts of the scrolls in the book should be from these English translations. I was a little disappointed, however, that there was no discussion in the book of the relative strengths and weakness of the various English translations which are now available (especially since that of F.G. Martinez seems to be more widely accepted as the academic standard).

VanderKam and Flint have produced a book which presents a remarkable amount of detail and careful discussion which should prove useful to quite advanced students, yet does so in a clear and readable manner which should make most parts of the book accessible to a wide readership. I recommend it highly to all who are interested in this fascinating subject.

The short book by Vermes is a collection of eight previously-published essays, all but one dating from between 1989 and 2003. The first two relate briefly some of the events relating to the discovery of the Scrolls and the chequered history of their publication. These essays do not offer much information that cannot be found in fuller form in a volume such as that by VanderKam and Flint. What is particularly interesting about them, however, is that they offer the personal perspective of, probably, ‘the senior Qumran scholar still active today’ (13), who was just beginning his doctoral studies when the first Scrolls were discovered and whose name is now inextricably associated with Dead Sea Scrolls research. The remaining six essays are generally quite readable (only two require some reading knowledge of Hebrew) and cover quite broad, thematic topics such as ‘The Essenes and History’, ‘Bible Interpretation at Qumran’ and ‘Eschatological World View in the Dead Sea Scrolls and in the New Testament’. This volume is well worth reading in a library if you have an opportunity, but if you plan to purchase something, buy VanderKam and Flint.