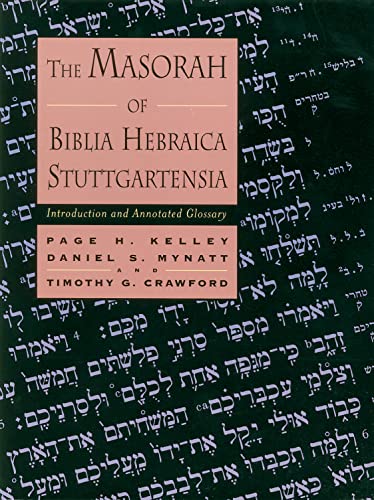 The Masorah of Biblia Hebraica Stuttgartensia: Introduction and Annotated Glossary.

The study of the Hebrew text as a source for understanding and interpreting the OT Scriptures owes an immense debt of gratitude to the Masoretes, who carefully copied the text and left us an enormous treasury of information about it. Much of this information is reproduced in the United Bible Society’s Biblia Hebraica Stuttgartensia or BHS. (The same was true of the older edition of Kittel, and will be the case with the projected new edition.) However, the student who uses this standard scholarly edition is bewildered by the many notes to the side and beneath the biblical text, written in Aramaic and abbreviated. Other than a few of the most common references in the side notes, most Hebrew teachers and their students avoid serious study of this amazing resource. This is partly not their fault: there has been no convenient resource for introducing the student to this information. That serious omission has now been remedied by the late Professor Kelley and two friends and colleagues who saw his project through to completion. In one sense this book is easy to review: it is a necessary resource that has no comparable rival.

The opening chapters introduce the background and history of the Masora’s development. Rudimentary references to Masoretic concerns already occur in the Talmud but not even the Babylonian Talmud, mentions the vowel signs. Kelley dates these references between 600 and 750 ad. The notes of the Masora should be dated slightly earlier with recognition that they grew in the following centuries. There is a brief history of the ben Asher and ben Naphtali traditions with some note of their differences. Kelley follows Goshen-Gottstein in minimizing the differences between the two. He also feels that Maimonides was influential in the rise and dominance of the ben Asher tradition as it developed over the centuries. The chapter concludes with a brief history of some of the most important Medieval and modern scholars who worked on the Masora.

The chapter on proto-Masoretic matters considers such items as inverted nuns, suspended letters, and the tiqqune sopherim (scribal emendations) that Kelley asserts (with some degree of certainty) appeared in the Hebrew text that the Masoretes first received and used. These, along with the Qere and Ketiv, indicate the degree of sensitivity and labour in the careful preservation of the pre-Masoretic manuscripts.

Chapter four discusses the Masoretic notes in the Masora parva (= Mp; the notes printed in the margins of the BHS). Examples are given of how to relate them to the Hebrew biblical text, how to interpret them, and how to study further by connecting them to the appropriate materials in the Masora magna (= Mm) beneath the Hebrew biblical text. The notes are discussed according to types for both Mp and Mm. Then specific verses are presented with their Masora notes translated and discussed.

The second half of the book is a glossary of the Aramaic words and abbreviations that occur in the Masora notes. Each includes a translation as well as examples of verses where the term occurs in appended notes. The volume concludes with a bibliography and Scripture index.

The whole volume is clearly written and will provide an essential guide for all students of this topic, so closely related to the text of biblical Hebrew that we use for the OT. One might have wished for the inclusion of a page reproduced from the BHS that could then be used to illustrate the position on the page as well as the nature of the Mp, Mm, and circules in thef MT itself. It would also have been helpful to include mention of the computer search programmes in the section on concordances (p. 4). However, the study of this book can be commended for a better understanding of the Hebrew Bible and for an appreciation of those: who worked so hard to vouchsafe its text for future generations.