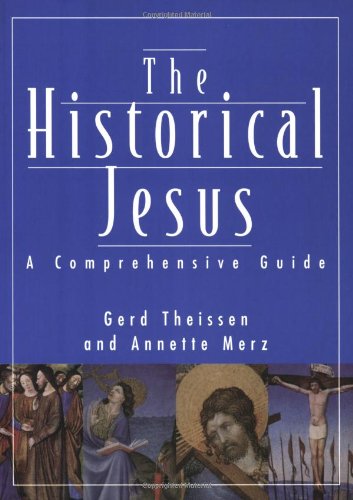 The Historical Jesus: A Comprehensive Guide

Of the writing of books about Jesus of Nazareth there is seemingly no end. Indeed it is probably true that Jesus Research is one of the most vibrant furrows of New Testament scholarship as we approach the New Millennium. Each of the volumes under review here contributes in a distinct way to the current state of the quest for the historical Jesus. Joachim Gnilka, for instance, offers us not so much a portrait of the historical Jesus but a set of contours by which to understand the impact made by the artisan from Nazareth.

Theissen’s The Historical Jesus: A Comprehensive Guide is exactly as its title describes. It covers briefly the initial phases of the Jesus Quest before analysing in detail and evaluating the sources we have for piecing together a life of Jesus. Part 2 of the book (125–85), which is a Sitz im Leben for the life of Jesus, is perhaps the most stimulating. It covers Second Temple Judaism, a historical chronology for Jesus’ life, as well as providing a geographical and social framework. Given that Theissen dialogues primarily with Anglo-Saxon scholarship, readers will be surprised that there is no interaction with N.T. Wright’s The New Testament and the People of God (London, 1993). This is not excusable given that the German edition of Theissen’s text was published in 1996. Nevertheless, what Theissen offers in the book is a ‘state of the art’ description of the Jesus Quest which forces the reader to interact. From his analysis of Renan and Schweitzer to his questions regarding the emergence of early Christology, Theissen shows himself to be a master practitioner. I suspect that some Evangelicals will find this scholar slightly suspect. Yet he presents the evidence and assesses the work of other scholars and leaves the reader to draw his or her conclusions. This he does by having questions and exercises at the end of each section. This ‘open learning’ style means that sections will need to be engaged with and primary sources evaluated in order for an informed opinion to be reached. NT scholars will base modules on this book, postgraduates working in the area will need to have it, and undergraduates will find it an essential text for their NT studies. All theological libraries will want to stock it. I am impressed by the volume but trust that I do not exaggerate by saying that this is a volume against which others published in the field will need to be evaluated.

Gnilka, unlike Theissen, dialogues primarily with German, rather than Anglo-Saxon, scholarship. Like his compatriot, Gnilka begins with a brief survey of the quest for the historical Jesus, although his survey is slightly more substantial than Theissen’s. He then offers two chapters that focus on the historical context in which the life and ministry of Jesus took place. Chapter 3 on Israel’s intellectual, religious and social setting is more impressive than chapter 2 which primarily focuses on the political context. The most substantial chapter (5) looks specifically at the message of the kingdom (80–131). It contains a wealth of information that will be vital to an undergraduate writing an essay on the kingdom. Theissen perhaps offers more information more quickly, so inevitably the student will be drawn there rather than to Gnilka. However, if one needs a combination of information and seeing a redaction artist at work, Gnilka trumps Theissen! What will impress readers of Themelios about Gnilka the most (I suspect) is his combination of biblical scholarship with biblical faith. One gets the impression that Gnilka is a scholar to remind people of the living Christ as well as the one rooted in history. The Appendix ‘Jesus, the Christ an Interview’ is well worth a wider audience.

Altizer presents The Contemporary Jesus. Here is the Jesus of different traditions; from apocalyptic to Blake and Milton; and from Schweitzer to Crossan. Altizer’s book is refreshing in that it points to the fascination that the non-theological academe still has with Jesus of Nazareth. Altizer’s work could almost be described as a religious studies look at the lives of Jesus. This is by no means meant as patronising, for indeed his work should be on every biblical scholar’s shelf as a reminder that there is a world beyond the confines of the text. Altizer’s approach differs totally from that of Theissen and Gnilka. Different types of Jesus are examined. Traditional ‘Jesuses’ are presented: apocalyptic, Pauline, that of the Jesus Seminar and J.D. Crossan in particular. Catholic, Protestant, Nihilistic, and Buddhist portraits of Jesus of Nazareth are also offered. He has also, somewhat strangely, included an anonymous portrait. Both the strengths and weaknesses of religious studies as a discipline are evident in Altizer’s work. He offers a good overview of the many portraits of Jesus—although he ignores the evangelical contributions to the Jesus Quest (Wright, Bockmuehl and Hurtado are all strangely missing). Because of the diffuse nature of his quest, Altizer is unable to offer an in-depth appreciation of any of the portraits presented. Indeed this might not be his reason for writing. He is certain that the present time is truly apocalyptic and it is only against an apocalyptic setting that the meaning of Jesus can be understood. I will leave it to readers to judge whether Altizer is correct about this. Although it seems to me that while he accepts that Jesus should be regarded as a man of his time, he makes the first century too like the twentieth for his Jesus to be entirely plausible (I wonder whether Altizer really understands Jewish and Jewish-Christian apocalyptic). This is something that Schweitzer attacked at the beginning of this century. It is remarkable that certain forms of scholarship are still falling into the same trap at the end of it. Even more surprising is the fact that Schweitzer is the dedicatee of Altizer’s book.

At the beginning of this review I noted that the Jesus Quest is indeed alive and well. These books demonstrate that fact. The Historical Jesus will find its way into NT courses and deservedly so, for Theissen (and Bowden) has offered us a masterpiece. Jesus of Nazareth: Message and History will perhaps not have the same wide reading as Theissen, although, perhaps more so than the latter, it is a supreme example of what a combination of faith and critical scholarship can produce. Gnilka really is an artist. I found Altizer’s book informative. It offers nuggets of gold about how those outside biblical studies understand the quest for the historical Jesus. It also is a cause for lament. It seems, as we stand on the threshold of a New Millennium, that practitioners of biblical and religious studies still have much to learn, not least how to talk to each other. For this reason alone, NT scholars would do well to ensure that Altizer stands alongside Theissen and Gnilka in their departmental libraries.