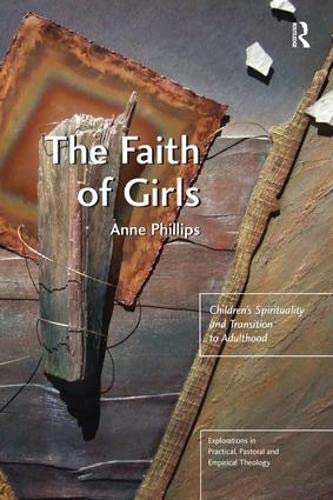 The Faith of Girls: Children’s Spirituality and Transition to Adulthood

Anne Phillips has correctly identified a significant dearth of academic research in the area concerning the faith development of pre-pubescent girls. The Faith of Girls was written by Phillips in response to this lack; her doctoral research significantly informing the content of this academic text. The book is published as part of the Ashgate series of Explorations in Practical, Pastoral and Empirical Theology, and it is what it says! It’s clear and commendable that Philips has a strong desire to see the faith of tweenage girls (those between childhood and adolescence; approximately 10–13 years old) nurtured. And it is striking that she hopes her work will in some way further prevent girls in this age and stage from being marginalised in the church. There is a clear appeal from the beginning to the end of the book to recognize the distinction between girls and boys, particularly in the area of faith development, and to consider the impact that this knowledge should have on how we spiritually care for girls within our church families.

Phillips undertakes empirical research amongst a group of seventeen girls aged 11–13; the girls are described as belonging to Christian faith communities. Three questions, addressed to the girls, form the basis of her research: How do these girls understand themselves as girls and as Christian girls? How do they understand themselves in relationship with God and ‘do their faithing’? What do they need from a church community to make it a healthy environment in which their faith can flourish? While Phillips is a British Baptist minister, her research was conducted across a variety of denominations and churchmanships.

Notably, but perhaps not surprisingly, the text displays a strong feminist agenda. Philips laments the fact that feminist theologians rarely interact with the discipline of childhood studies and her work attempts in some ways to fill that void. The biblical exegesis throughout the book has an intentionally feminist hermeneutic, relying heavily on the works of feminist theologians and biblical scholars and consequently the thesis is influenced strongly in this direction.

In chapter 2 the varying disciplines of sociology, psychology and theology are employed in the analysis of what contemporary ‘girlhood’ is understood to be and how faith development relates to the physiological and psychological development of girls. We can here, with a clear understanding of common grace, benefit much from Phillips’s study. Specific effects of the various waves of feminism on the development of girls are helpfully identified, allowing us to understand the societal narrative that is accompanying the maturation of the girls in our church families. It’s also useful to note that the age group addressed by this study are statistically identified at the age where participation in organised religion declines most significantly thus highlighting the need to prioritise the spiritual care of girls within this age group.

Chapter 3 provides an overview of the methodology used by Phillips; she includes details of how she approached each stage of her research from recruiting the girls involved in the study to the processing and analysis of the data obtained. The fourth chapter begins to give a detailed insight into the experiences articulated by the girls in the study during the process of transition from childhood to adolescence. The areas discussed in this chapter are significant and important for those who minister amongst children and youth to be increasingly aware of: a greater awareness of their physical appearance; a sadness at the loss of the innocence and freedom of childhood; an awareness of their own mortality; a great understanding of and appreciation for relationships (friendships); a physical bodily change; and the introduction of hormones! There is no doubt, as anyone who has contact with a prepubescent girl will testify, that these are all issues that are real and live for girls. There is also no question that there is much we need to do to help girls think Christianly during this period of their young lives. Whilst Phillips is keen to affirm and listen to girls as they go through this transition, she offers little by way of practical advice to churches as to how they can biblically and spiritually support girls through these tricky years.

Phillips reports on research that suggests a greater positivity amongst girls to faith in chapter 6; it is apparent, however, particularly in this chapter, that the girls may not be Christians, that is, people professing faith in the Lord Jesus Christ and his work. The girls in the study are described as those who are ‘on a journey’, those who are theologising in a cerebral way, rather than a clearly relational way. Much of the discourse in this chapter is fascinating, particularly the sections concerned with how the girls articulate their understanding of God, the Christian faith, and their relationship with others in the community of faith, which Phillips calls ‘faithing.’

It is notable that Philips makes little of the place and role of the nuclear family in the faith development of girls; she is primarily concerned to locate the faith development and the responsibility for spiritual nurture within the church. The final chapters of the book sees Phillips adopt metaphors of an ‘amniotic environment’ and ‘the womb’, originally found in the works of Trible and Kegan, to describe this stage of a girl’s life. The metaphor identifies a secure environment that does not restrain unnecessarily, as the place of suitable growth for transition. Complementing the reproductive imagery, Phillips note that the girls cannot stay in the womb perpetually and describes the church as the midwife—the companion to the girl in midst of transition.

This is an expensive book and a demanding read, both of which will probably disincline the majority of those working with children and young people from engaging with it. I would suggest that it’s an important book for anyone engaged in the task of training children’s and youth ministers to read—not least because it draws together a large number of disciplines (developmentalism, sociology, psychology, and theology) and influential figures (Nye, Hay, Westerhoff, Fowler) pertinent to current trends and direction setting in both children’s and youth ministry. There is much that is interesting, stimulating and provocative contained in the pages of The Faith of Girls. There is a great emphasis on hearing the experience of the girls and using selected biblical accounts and narratives to exegete those experiences. From a sociological perspective this work is useful and significant, yet from a biblical perspective it is unsatisfactory. The feminist agenda distorts the beautiful biblical narrative that details the spiritual nature of the child, the capacity of the child to apprehend great spiritual truths, and the concern that our God has to see children (both boys and girls) brought into a vibrant, living relationship with Him.