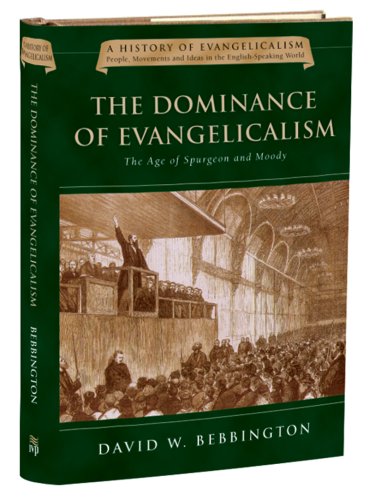 The Dominance Of Evangelicalism—The Age Of Spurgeon And Moody

This is the second, of a five volume series to appear, and covers the second half of the nineteenth century. The first chapter covers the, now well-known evangelical, distinctives which are held by people who identify with this stream of Christian belief and practice. These are the emphasis on the atoning work of Christ on the cross; the need for personal faith through conversion; the supreme authority and importance of the Bible; and the binding obligation for mission. Bebbington gives summaries of the life and work of Charles Spurgeon, an Englishman, and Dwight Moody, and American, who were examples of pre-eminent evangelicals of that era. The second chapter considers the variety within evangelicalism, giving numerous examples of the different denominational, geographical and social contexts in which evangelicals were found. Chapter three describes the practice of the faith. It covers evangelical spirituality, patterns of worship, methods of outreach and missions to the young, revivals and overseas mission.

Chapters four and five consider the legacy of the Enlightenment and the permeation of Romanticism, showing how these contrasting movements influenced and shaped evangelicalism. In this period when Calvinism was being modified to a degree previously unknown since the Reformation, while Arminianism appeared to many evangelicals as a more attractive theological position that attracted many adherents outside its Methodist heartlands. Likewise the older postmillennial view of the end-times was losing ground to the newly invigorated premillennial understanding of this matter. Challenges from the Anglo-Catholic Oxford movement, the influence of more liberal theological thinkers, often trained in Germany, and the theory of evolution propounded by Charles Darwin, were pressures that placed a heavy strain on evangelicals. Divergence occurred with some people within the movement seeking some form of accommodation with these new opinions and others (ch. six) who sought to strengthen their orthodox theological position. Features identified as a mark of the more conservative evangelicals included the founding of foreign missionary societies on the faith principle, most prominently by Hudson Taylor (China Inland Mission) and at home in the establishment of children’s homes run on this basis by George Muller. The rise of the Holiness and Keswick movements, together with the roots of pentecostalism also emerged from conservative evangelical circles in this era.

Evangelicals and Society is the subject of chapter seven, in which the role of women, race relations, religion and recreation, the temperance movement and the social gospel are amongst the issues to be addressed. Chapter eight summarises the evidence for the dominance of evangelicalism in the second half of the nineteenth century. It is argued that evangelicalism was in its most influential position in the church and wider culture in this era. The impressive worldwide growth of the movement and the degree to which there had been a retention of the core doctrinal views that characterized it ensured that ‘the evangelical movement was a dominant force in the English-speaking world’ between 1850 and 1900.

This book is a most thorough treatment of its subject with impressive and detailed examples culled from the full spectrum of evangelical traditions and denominations and across the range of countries in which this movement was found. It is intended as an overview of this subject and serves as a clear and helpful guide through its terrain. An impressive select bibliography provides useful resources for following up in more detail subjects raised in the book.