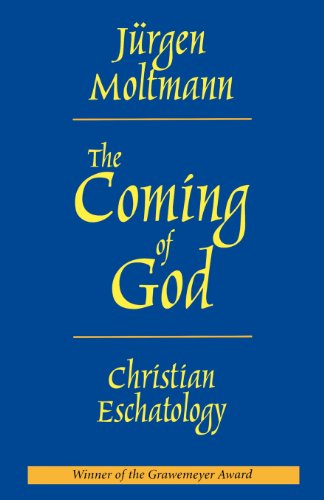 The Coming of God: Christian Eschatology

In the mid 1960s, Moltmann’s Theology of Hope was hailed as a bold attempt to re-centre the entire theological enterprise in eschatological expectation. Now 30 years later, Moltmann has finally written a work that gives sustained attention to eschatology as a theological topic in its own right. It has been worth the wait! The Coming of God is probably the most impressive and creative treatment of ‘the Last Things’, to appear this century.

Published as Moltmann retired as Professor of Systematic Theology at the University of Tübingen, this is also the fifth and final volume of his ‘contributions to theology’ series (which, he assures us, is not an exercise in Dogmatics). Given Moltmann’s dislike of closed systems, this book, long as it is, does not attempt to have the last word. Moltmann writes not only to clarify the mind, but also to move the heart and awaken hope. Theology remains subordinate to doxology. Theoretical insight is to be in the service of a vision of the Kingdom of God.

True to his earlier convictions, he prefers to see the subject matter of Eschatology not as an Ending but as the Beginning of the New Creation. It has four main horizons: hope in God for, (a) God’s glory, (b) the new creation of the world, (c) the history of human beings with the earth and (d) the resurrection and eternal life of human people. These are treated in reverse order in Sections II–V. Moltmann thus moves from personal eschatology to historical, cosmic and ultimately Divine eschatology. Paralleling the way he sees the relationship between individuality and universality and between creation and God, the former horizons find their inspiration, source and destiny in the latter.

Consonant with the cosmic sweep of Moltmann’s vision, he interacts with a very wide variety of sources, including patristic, mediaeval, Protestant, Catholic, Eastern Orthodox and Jewish theologies, and modern secular cultural analysis. This breadth is evident in his very helpful survey of Section I which examines the eschatologies of Schweitzer, Cullmann, Barth, Bultmann, Bloch, Rosenweig, Scholem, Benjamin and Löwith. Later, he even interacts, albeit briefly, with John Stott’s advocacy of annihilationism (a position which, as a universalist, he finds unconvincing). On this topic, he commends the discussion of evangelical theologian Stanley Grenz.

It is impossible to do justice to the riches of this book in a brief review. Standout features include the enormous amount of secondary literature he brings to our attention (e.g. on Millenialism), the pastoral warmth and sensitivity of his discussion of the grief process, his fascinating explorations in the philosophy of time (which are the key, in my view, to the structure of his theology), his frequent references to the Biblical tradition, his social and ecological concerns and the Christian conviction that animates the entire project.

I remain unconvinced that his eschatological panentheism, in which creation is finally ‘taken up’ into the divine life of the Trinity, reflects a sufficiently robust doctrine of Creation. Moltmann has a persistent tendency to see finitude and transience as limitations that must be overcome as they are, in themselves, evidence of alienation from God. God’s ‘grace’ simultaneously fulfils and negates created ‘nature.’ Thus, where the Scriptures speak of the restoration of creation’s covenant with God, Moltmann’s vision, when all is said and done, is of the world in God. But even where Moltmann fails to convince, he never fails to stimulate. This is a most impressive work. When read with a critical mind, it is highly recommended.