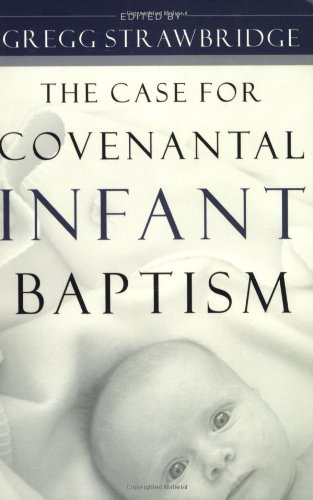 THE CASE FOR COVENANTAL INFANT BAPTISM

This heavyweight defence of the practice of baptising the babies of believers is the work of sixteen American Reformed writers, about half of whom will be already familiar to many in the Reformed community in the UK. Their essays are marked by an absence of polemic and caricature. An element of repetitiveness was perhaps unavoidable if all wrote to their remit. Readers who have engaged in serious theological debate about the case for infant baptism will find little here that advances that debate in a new way—which the editor and his fellow-contributors may regard as a compliment rather than a criticism. The reader will, however, be introduced to some recent literature which has not made its way across the pond.

Overall the volume disappointed me for three main reasons. First, and surely foremost for Themeliossubscribes, it pays inadequate attention to the NT teaching on Christian baptism. This weakness seems not accidental, since one writer claims that, ‘The debate about infant baptism is fundamentally a debate about children, and not really a debate about baptism at all’ (287, italics original). Such an approach is likely to perpetuate a glaring—and surely, intolerable—inadequacy of a great deal of Protestant theologising on infant baptism, from Calvin’s Institutes 4:16 onwards, namely, its marginalising a much of the NT’s explicit witness to baptism. The result is evident in Reformation orders of service for infant baptism from Edwardian England and Knox’s Scotland.

The authors of these essays would not deny that, whether its recipients should include babies or not, there is but one baptism. It follows that the NT doctrine of baptism has to encompass all its subjects, whether capable of answering for themselves or not. This may appear obvious enough, but in the Reformed tradition in which this boot stands, the doctrine of baptism has very largely been no more and no less than the doctrine of infant baptism. Most NT texts about baptism will be found in the book’s scriptural index, but the volume lacks a sustained treatment of their doctrine. Romans 6:3–4 is discussed only under ‘The Mode of Baptism’, a chapter which turns out to cite more NT baptismal texts than any other. Whites are more interested in ‘and to you children’ in Acts 2:39 than in the rest of verses 38–39.

Some defenders of infant baptism have frankly accepted that most of the NT references to baptism not only apply to faith-baptism but also cannot, without unacceptable consequences, be made to encompass baby-baptism. This is surely a way of proceeding which the contributors to this volume would not sign up to, but they have to do more to avoid appearing to do so by default. There is clearly no future in seeking to construct a case for infant baptism which renders most of what the NT says about baptism irrelevant.

Secondly, the volume as a whole does less than justice to the roots of the Reformed tradition, in the Reformation and its confessions. Lyle Bierma’s chapter on the Reformed confessions of faith is one which some of his fellow-contributors could have read with profit in advance. He draws attention to the fact that ‘the treatment of infant baptism in each confession forms a relatively small part of a section on baptism in general’ (241), which is surely how it should be. The tail should not wag the dog! Bierma also comes very close to acknowledging that the confessions present baptism as a ‘means of grace’ by which God normally confers the gifts of grace which it signifies. I have argued elsewhere that the Westminster Confession of Faith teaches baptismal regeneration of infants as God’s common way of working. The Reformers in general held to a much more realist understanding of baptism than most Reformed evangelicals today entertain.

Other essays here retreat too often, even in exegeting the Westminster Confession (220, 227, 229), into a merely declarative function for baptism, instead of an instrumental one. This is also the story of evangelical theology which starts with infant baptism. The latter has so frequently had a reductionist effect on doctrines of baptism, so that one believes about baptism only what one is comfortable to hold about infant baptism. This does despite to Scripture and to those pioneers whose heirs we claim to be.

One learns a great deal more from this symposium about covenant than about baptism. Perhaps this too is as it should be, but there is a risk of circularity of argument. It is true not only that the covenant was ‘the solid, biblical, and objective foundation upon which all the Reformers unanimously and without exception rested the legitimacy of infant baptism’ (Herman Bavinck, cited 61), but also that ‘covenant theology was formally christened by Zwingli in response to the Anabaptists’ (Strawbridge, 275). The defence of infant baptism seems to have been a major, even the major, motivation for the Reformation elaboration of covenant theology. Testing the biblical viability of that development must today include starting with the NT’s doctrine of baptism, in order to avoid a covenantal case which, a la Calvin, leans chiefly on the OT and to preclude a duality of baptismal doctrines, one for believers and another for their offspring.

It is an interesting hypothetical question whether the Reformers would have introduced infant baptism had the church before them not practised it. In reality they defended what they inherited, sometimes tortuously because infant baptism had become normal practice in the West on the basis of teaching which they could not endorse. This is recognised by Peter Leithart’s sparkling essay on ‘Infant Baptism in History: An Unfinished Tragicomedy’, which is another chapter other contributors might with value have read before compiling their own. It is the only one which qualifies my third ground for disappointment with the collection, its isolation from recent reflection on baptism among the churches. The WCC’s Faith and Order text, Baptism, Eucharist and Ministry (1982), is mentioned nowhere, nor the widespread shift of baptismal understanding which it partly reflected and partly stimulated, interacting with an emerging majority view among NT scholars that infant baptism cannot be confidently claimed to be apostolic. It is now broadly acknowledged among mainstream paedobaptist churches that if we may speak of a norm of Christian baptism it is the baptism of the professing believers. It cannot be denied that reappraisal of the biblical and patristic evidence has significantly influenced this outcome.

Leithart alone displays an awareness of these ongoing baptismal retractationes outside the American Reformed communities, and does so with a frankness rare among advocates of infant baptism. Ignorance of, or deliberate refusal to engage with, these large-scale movements in the biblical theology of baptism leaves this book swimming against a tide flowing not solely from Baptists but from other paedobaptist circles. If, as Leithart enunciates with enviable crispness, ‘The church was rescued from Baptist theology and practice by Augustine of Hippo’ (258), today, in Roman Catholic, Anglican and some other communions (for the Church of Scotland see the Panel on Doctrine report approved by the General Assembly in 2003), the wheel is coming round not full circle but at least part circle. The core conviction of Baptist theology, that the NT attests faith-baptism as the norm, is now more widely accepted than at any time since the fourth century, i.e. prior to Augustine (at least the Augustine of original sin and infant baptism). Since this is at root a biblical reassessment, the case for infant baptism within a covenant framework must be made against that backcloth rather than simply in the light of the tradition of a universal paedobaptism. if a biblically inspired renewal of baptismal theology is under way, it ill behoves the Reformed to decline to benefit. Otherwise, the case for the inclusion of believers’ children within the covenant, made here winsomely from different angles to good effect, may appear to be vindicated without the corollary that baptism be the appropriate sign for them—if, that is, it is not also shown that the significance of baptism, expressed in realist terms by the NT texts, applies equally to babies.