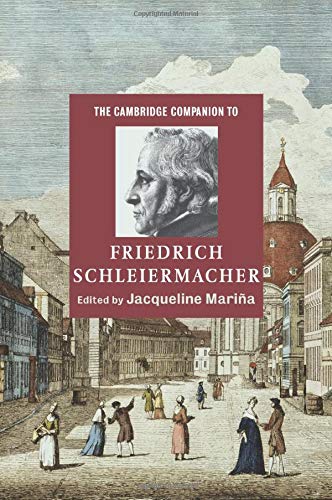 In under ten years the Cambridge Companion to Religion series has established itself as perhaps the most reliable series of introductory guides to key theological topics and figures. Each companion consists of a collection of introductory essays which seek to serve as guides to the main themes of the subject in question.

Friedrich Schleiermacher, the father of modern or liberal theology, is a figure most undergraduate students of theology will have to deal with, directly or indirectly. The companion to Schleiermacher should serve as an early port of call for that time. It is divided into three sections: Schleiermacher as theologian; The first part deals mainly with what is the primary matter for Schleiermacher: the epistemology of religious knowledge, but it also deals with his metaphysics, hermeneutics and interpretation of Plato. The second section contains, amongst other things, interesting and important articles on Schleiermacher’s Christology, anthropology, and the much-debated question of his understanding of God as triune. The highlight of the final section is perhaps Thandeka’s suggestion that Schleiermacher espoused a kind of protofeminism.

The companion to the twentieth century Roman Catholic theologian, Karl Rahner, follows the same basic formula, but is divided into four sections. The first examines Rahner’s spiritual, philosophical and theological roots; the second examines his key theological investigations; the third and fourth bring his thought into dialogue with issues of contemporary concern, such as religious pluralism, post-modernism and feminist theologies before then assessing his significance for theology today. This companion also provides helpful further reading for additional study.

In keeping with the series as a whole both companions serve as excellent resources for both new students and scholars of Schleiermacher and Rahner. However, students engaging with these figures for the first time must be aware that these companions will not provide a specifically evangelical engagement and critique.