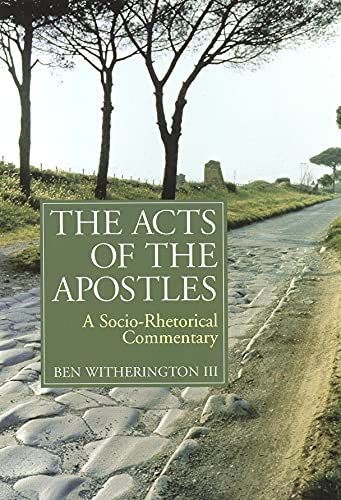 The Acts of the Apostles: A Socio-Rhetorical Commentary

Ben Witherington, professor of NT at Asbury Seminary, the premier North American United Methodist institution, has already distinguished himself as one of the most prolific younger evangelical scholars of our day. This latest offering I believe is his longest book to date and it offers an outstanding summary of scholarship on Acts. There is scarcely anything relevant and recent that Witherington has not read and included in his bibliography. Particularly useful are his frequent digests of the most salient findings of the five volumes thus far in print from the Cambridge-based Tyndale House project. The Book of Acts in Its First Century Setting.

While the book, like its predecessor on 1 and 2 Corinthians, is called a socio-rhetorical commentary, it is much more than that, being also a compendium of discussions of just about any kind of question one might want to ask of the text of Acts. These include, in particular, repeated robust defenses of the historicity of disputed portions of the narratives of Acts, especially in light of classical historiography, issues of harmonizing apparent contradictions between Acts and Paul or between Acts and Josephus, and issues of source criticism, literary criticism, theology and even geography.

Still, it is true that social and rhetorical questions receive special attention. Witherington is abreast of the growing ‘cottage industry’ of studies of the NT texts in light of the ancient Mediterranean culture of honour and shame, dominated by patron-client relationships and the reciprocal favours such relationships demanded. He also divides every speech in Acts into what he believes are its constituent elements according to the forms of ancient Greek rhetoric and discusses the function of those speeches according to the standard classifications of forensic, deliberative and epideictic speech.

A hundred-page introduction to Acts forms one of this commentary’s great strengths. Detailed discussions demonstrate the historical genre of Luke—Acts, especially via comparisons with Polybius and Ehporus. Careful analysis of what ancient historians, including Thucydides, said about speeches, debunks the notion that most felt free simply to make up what they thought speakers would have said on various occasions. Witherington defends Lukan authorship but thinks a date in the 70s or 80s more likely than one right at the end of the events with which Acts concludes. Theophilus is the primary audience of the work (Witherington mostly ignores the question of a larger Christian community or communities behind Theophilus) and its patron, perhaps having come out of the synagogue(!). Luke is a Gentile, however, writing with primarily Gentile, even universalistic concerns. But despite Paul’s repeated turning from Jews to Gentiles, even at the climactic end of Acts, Luke does not view the Christian mission as ever absolved of the responsibility to evangelize Jews. In both the introduction and the commentary proper, Witherington repeatedly stresses the parallels between Jesus, Peter and Paul in Luke’s two-volume work and frequently includes detailed discussions of the chronology of events.

A short review can barely scratch the surface of exegetical highlights, but the following are of special note. Witherington sees no consistency in patterns of Christian conversion or initiation and so has no difficulty with the seeming diverse models in Acts as to when the Spirit comes vis-a-vis belief and/or baptism. He alternately assumes that Acts does not address the baptism of children (a second-or third-generational issues in the history of Christian) or that household baptisms may provide precedent for infant baptism. Siding almost entirely with Craig Hill (vs. Martin Hengel), he believes that the Hebrew-Hellenist divisions of Acts 6 are exclusively ethnolinguistic and not theological. Thus Stephen does not represent a more radical theological departure from Judaism than the Twelve; his speech is not defending his objectionable ‘liberalism’ but a counter-indictment of the disobedient Jewish leaders of his day.

The reason Paul departed from his usual practice of evangelizing major urban centres when he left Cyprus for Pisidian Antioch may have nothing to do with his health (as Gal. 4:13 suggests) but because of Sergius Paulus’ family connections in that portion of Southern Galatia. The Apostolic decree identifies four elements that all could have been found in the idolatrous worship of pagan temples, hence the prohibition against them. Throughout the portions of Acts dealing with Paul’s travels, numerous incidental details question the notion that Paul’s letters are to be preferred to Acts as primary source material for reconstructing the historical Paul. (Conversely, Paul’s epistles are at least as overtly theological and thus as potentially ‘biased’ as Luke’s Acts.)

The ‘we-sections’ of Acts include much more circumstantial and vivid detail than do most of the other sections of the book and are less dependent on ‘set speeches’, thus supporting their origin in Luke’s first-hand participation in Paul’s journeys at these points. Witherington well captures the strategic timing of Paul’s appeals to his Roman citizenship as related to what proves in the best interest of the gospel more generally rather than what is most convenient personally. He stresses the climactic role of Acts 20 with its sermon by Paul to the Ephesian elders in Miletus and notes how it contains the greatest number of parallels to the rhetoric of Paul as disclosed in his epistles, not surprising since it is the one sermon of Paul in Acts addressed exclusively to Christians.

In his closing chapters, Witherington provides particularly helpful insights from the recent work by Tajra on Paul’s trials and by Rapske on Paul’s imprisonments to help us understand these episodes against their social and rhetorical backgrounds. By the time we reach the end of Luke’s narrative, with its nuanced portraits of Roman and Jewish authorities (not monolithically good and bad, respectively, as many have argued), we realize that Luke is writing not to legitimate Rome to the church or the church to Rome but ‘to legitimate the faith to new insiders’ (p. 810). Twenty-six small print excurses punctuate the commentary with helpful treatments of such varied issues as Luke’s use of the OT, his Christology, tire social status of the earliest Christians, the origins of the synagogue, background to the God-fearers, and so on. Two appendices treat the ‘earliness of Galatians’ and ‘salvation and health in Christian antiquity’.

It is unusual to see Greek words throughout the book printed not only without accents but also without breathing marks. There are a fair number of typos, particularly among Greek and German material (see, e.g., pp. 393, 491, 514). In one three-page spread of the bibliography (pp. xxxi–xxxiii), I counted five. H. Tajra’s name is misspelled consistently throughout the book as Tajara. On p. 607 the comparison between American and international usage of ‘first floor, second floor’ language seems backwards. On p. 157, the last line before the excursus seems to be missing a verb.

Theological students who want a comprehensive, up-to-date overview of Acts research from an evangelical perspective will find it here. Scholars who wish to continue asserting that Luke’s theological concerns or literary artistry run roughshod over his historical accuracy must refute Witherington’s detailed argumentation. For someone who can handle the massive amount of information in this volume and wants a ‘one-stop shopping’ item on Acts, this is it!