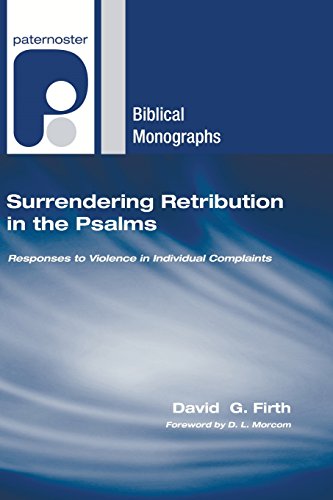 Surrendering Retribution In The Psalms: Responses To Violence In The Individual Complaints, Paternoster Biblical Monographs

This is at least twice as interesting as many published PhD topics. First, it began life in the context of hot post-Apartheid South Africa in which political violence had left a legacy of criminal violence. Secondly, it deals with an issue that many ordinary Bible readers find awkward to accommodate to their ethics, spirituality, or their idea of inspiration.

Besides the mandatory review of previous work and enunciation of critical methodology (Ch. 1), four chapters cover ‘Psalms of False Accusation’ (Pss 7, 17, 109, 139), ‘Prayers for Protection’ (Pss 3, 27, 35, 55, 56, 64, 143) and ‘Psalms of Sickness’ (Pss 38, 69). Besides the form critical and structural headings, Firth’s discussion highlights the form of violence, the threat—it can be emotional and psychological pressure—and the response to the threat of violence in each of these psalms. This is the spadework that precedes chapter 5 ‘Conclusion’ which summarises his results, but also goes on to sketch ‘Implications of Results for the Study of the Psalms’. The last section ‘Areas for Further Research’ concludes with Practical Implications of this Research’. One could only wish that for this publication, less than a page (146) could have been really expanded beyond the phrase ‘a non-retaliatory stance’. The book not only remains very much within the safe zone of academic Old Testament research but also glances over the fence into our world next door now and then.

As a sample, it is worth mentioning Firth’s treatment of Psalm 109:6–19 (37ff) to read alongside Leslie Allen’s treatment in the Word Commentary series. Firth does not rescue our psalmist from wishing these maledictions on his enemies—by turning them into quotations from the enemies. He suggests that we read these imprecations against the background of the punishments meted out to false accusers under the law. The psalmist calls for the death penalty for the ringleader and his accomplices as their guilt emerges under investigation. The due process of retribution is committed to Yahweh, but the fervent wish for it expresses what the psalmist wants.

Perhaps it is a tribute to this piece of research to say that its outcomes seem straightforward. Indeed, the title summarizes it in two words. Retaliation is requested rather than implemented; we are reading prayers to Yahweh. Still, another more complex issue surfaces: ‘How Yahweh’s violence is to be enacted is never made clear’ (141). Granted the probable canonical intention of inculcating trust in Yahweh, we are rather left scratching our heads as to what relevance to contemporary spirituality, personal or communal, these psalms might retain. A troubling question mark is left hanging over whether we should expect God to do anything in each particular circumstance to protect or deliver. Does this mean that prayers like the ones Firth analyses become a form of therapeutic self-help designed to articulate anxiety, face fears—and so prepare for the worst—while hoping for rescue? Perhaps Firth will take these issues in contemporary spirituality further in a Grove booklet. Given the foundation laid by this monograph in Biblical Studies, many would likely appreciate this kind of extension into the area of application that Firth obviously values himself.