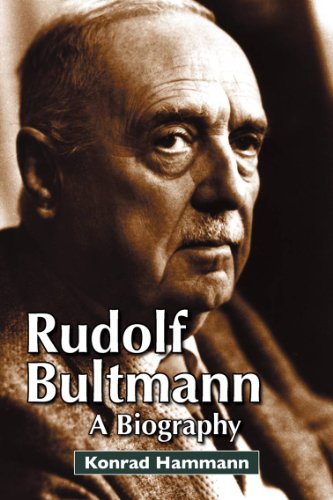 About ten years ago, as an MDiv student at Trinity Evangelical Divinity School, my professor Bob Yarbrough once gave the wise counsel that one of the best ways to grasp modern Western history of NT research was to strive to understand the figure of Rudolf Bultmann. [Editor’s note: See Yarbrough’s review of Labron, Bultmann Unlocked, in Themelios 36:3 (2011).] As a pioneer of form criticism of the Gospels, popularizer of the results of the history of religions school, interpreter of Paul’s theology, writer of the most significant twentieth-century NT theology and commentary on the Fourth Gospel, not to mention his explicitly theological contributions, there is no doubt that Bultmann casts a long shadow upon the field of NT studies.

No friend of historic Christian orthodoxy, the shadow is one that interpreters do well to understand and learn from before criticizing. Hammann’s biography provides not only interesting historical and personal information on his subject; but also presents a detailed, comprehensive presentation of his NT research, his forays into positive theological contributions, and the controversies that ensued.

In what follows I primarily limit my review to interacting with the relationship between Bultmann’s historical research and its interconnection with his theological contributions, for it is precisely Bultmann’s methodological commitment to do theology through history that continues to make him such an influential figure.

Bultmann’s childhood was a happy one. However, although his mother was committed to historic Christian orthodoxy, his father adopted numerous liberal positions that led to his alienation from many friends and family. It may not, then, come as a surprise that as a young child Rudolf “likewise freed himself from a number of old notions,” including “the orthodox concept of faith mediated by his religious education, which held that any religion must necessarily contain objective content” (p. 11). Thus, very early on as a young theological student, unwilling to abandon Christianity and faith, Bultmann committed himself to re-envisioning theology and freeing it from its captivity to such things as the Trinity, atonement, and miracles. Theology cannot simply present the intellectual doctrines and faith claims of the NT, but, because the NT is a historical, temporal phenomena, it must rather come to recognize its distinct witness to “the new religious experience of the human person as he discovers his new relation to God” (p. 60). Already at this early point in his career (ca. 1913), Bultmann had jettisoned the task of dogmatics as one of reconstructing objective historical events and facts or theological-doctrinal concepts and had committed himself to “an existential participation” in “the eternal forces that reveal themselves in the temporal events of history” (p. 63).

Since history and facts do not, for Bultmann, have any foundational significance for faith, historical investigation of Christian origins is free to employ radical and skeptical historical methods. Revelation consists in the NT witness to the event whereby humanity is awakened to a “longing for the true self, [which] also leads to self-reproach arising from a sense of conflict between a willing and doing like that described in Rom 7:15. Out of this conflict, only the self that becomes aware of itself as gift, as a thought of God, is able to achieve true selfhood” (p. 120). One sees from his essay on Rom 7, his sermons, and his early book on Jesus that the seeds of Bultmann’s existential interpretation of the NT pre-date his interaction with the philosopher Martin Heidegger. Though the skeptical results of his historical research are legion, what occupied the bulk of controversy and critique was his radical stance toward the dispensability of the historical Jesus as an object of faith. For Bultmann, Jesus belongs to the history of Judaism, never envisioned the possibility of worship or faith in him, does not witness to any deep religion, and whose primary significance is found in his consciousness of the moral demand upon humanity (pp. 121–29). Therefore, his The History of Synoptic Tradition—an incredibly influential classification of the forms, original life-setting, and history of the oral tradition of which the Synoptic Gospels are composed—“provides no valid reports about the life and activity of the historical Jesus” (italics mine, p. 116). Why? Again, the answer is related to another of Bultmann’s radical conclusions about early Christianity. The bulk of the Synoptic traditions stems from the Hellenistic-Gentile church, a community that was not concerned with history but with the present experience of the risen Lord. For two reasons, then, the historical Jesus cannot be the object of Christian faith: the historical task is impossible, and history is not the true subject matter of Christian faith.

Similarly, Paul is no salvation-history thinker who witnesses to God’s saving acts within history. Paul’s articulation of the cross of Christ is not significant as an objective historical event that achieved reconciliation between God and humanity, but is rather a call to abandon the belief that one’s existence is at her disposal and realize that the Christ present in the preaching of the kerygma is lord of their existence. What of Paul’s cosmic and apocalyptic statements, then, which speak of flesh, sin, cosmic powers, the pre-existence of Christ, and the decisive intervention of God within human history to achieve humanity’s liberation in Christ’s cross and resurrection? Bultmann understands all of Paul’s statements about God as mythological language used (taken from Gnosticism or Jewish apocalyptic) to express human existence. Since the entire NT worldview and its witness to the salvation-occurrence are mythological, the appropriate method for reading the NT is demythologizing. Myth is not only obsolete and demands a sacrifice of the intellect for the modern human, but it also objectifies God (i.e., imprisons God by turning God into an historical-empirical report). Christian interpreters, then, must understand that the real subject matter of myth is human self-understanding of its existence. Statements about God, then, must be seen for what they really are—anthropological statements.

Hammann’s biography is a valuable contribution as it situates Bultmann’s research within its historical context, provides judicious discussion of his NT scholarship, and presents both its positive and negative reception from both the academy and church. Hammann gives a sympathetic but by no means sycophantic presentation of Bultmann, and thereby enables the reader of any theological persuasion to evaluate Bultmann and his influence upon NT studies. Though Bultmann has elicited numerous critiques, I was surprised to find no mention of the role that Marburg neo-Kantian philosophy played upon his epistemology and his essentially “atheistic methods” (to borrow a phrase from Adolf Schlatter). On Bultmann’s influence by the Marburg neo-Kantian philosophers, see Roger Johnson, The Origins of Demythologizing (Brill, 1974) and Robert W. Yarbrough, The Salvation-Historical Fallacy? (Deo, 2004). Sadly, in my view, the consequences of his epistemology, his historical skepticism regarding Christian origins, and his anthropological interpretation of Paul are matters with which students and scholars of the NT must reckon. Hammann’s biography presents an incredibly valuable resource to do just that.