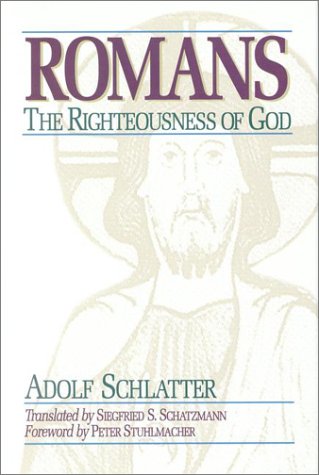 Romans: The Righteousness of God

Long the victim of unjustified neglect, particularly in English-speaking circles, the brilliant Swiss scholar Adolf Schlatter has begun to receive his due in the 1990s. Schlatter scholar Werner Neuer has published a popular (ET 1995) and a critical (1996) biography; Andreas Köstenberger has translated Schlatter’s two-volume NT theology; doctoral theses on Schlatter have been undertaken at Princeton, Oxford and Marburg. The appearance of an English version of Schlatter’s Romans commentary marks a new stage in the Schlatter renaissance, as it is the first of Schlatter’s nine critical commentaries to be translated.

A meaty forward by Peter Stuhlmacher furnishes a valuable précis of Schlatter’s distinctive contribution to understanding Romans and Pauline theology. First, Schlatter’s reading of Romans is ecumenical rather than narrowly confessional; Paul’s message as Schlatter articulates it challenges both liberal and conservative dogmatists. Secondly, the centre of Romans, indeed of Paul’s theology generally, is the righteousness of God (cf. Rom. 1:17; 3:5, 21, 25, 26; 10:3; 2 Cor. 5:21). This stands in contrast to current understanding of Paul a la Wrede, Schweitzer, and E.P. Sanders which sees God’s righteousness and justification by faith as secondary Pauline concerns. Thirdly, the classic Lutheran law-gospel dichotomy, which so distances gospel from Torah that obeying God’s commands is made to seem almost sinful in itself, is wrongheaded: ‘Paul did in fact argue that the works of the law were the works of a sinner, but he did not say that they were sin’ (p. 88). Fourthly, Romans’ message demands that Christians move beyond the conception of ‘God’s righteousness’ meaning no more than mercy and remission of sin, as grand as those truths may be; the gospel that reveals God’s righteousness gives rise not only to saving faith but also to transformed and transforming Christ-likeness in those who embrace it. The goal of Christ’s work through the gospel is not merely faith but ultimately God-generated love! Until Christians embrace Paul’s gospel call to a justifying cross that not only grants ‘rest and comfort’ but also galvanises into love and action’, they have missed the point of Romans grandest soteriological theme (cf. pp. 22f.). Schlatter pressed this point not only in his Romans commentary but also in separate treatises on Luther and Lutheran scholasticism, sparking a spirited debate of continuing importance.

This commentary is not easy reading. Any subsequent edition could benefit from careful editing by someone well versed in German. Schatzmann’s translation is not defective, but it could sometimes be sharpened and refined. Another editorial improvement might be restoration of Schlatter’s original non-inclusive language. At points one fears anachronistic application of current English-language inclusivist convention.

Yet the effort to follow Schlatter’s exposition will be amply rewarded. To read a section of Romans carefully, preferably in Greek, and then to engage Schlatter is to become party to high-level deliberations touching first-century Jewish thought, Pauline theology, early Christian history, and Greek exegesis with implications for dogmatics, ethics, and practical theology never far from the fore. The commentary is poorly suited for simplistic resolution of long-standing cruxes (e.g. Rom. 7) but rather demands careful and sustained interaction. It often drives the reader back into the OT or other portions of Scripture which Schlatter sees as explanatory of Paul’s line of thought. In these respects it is much like Romans itself.