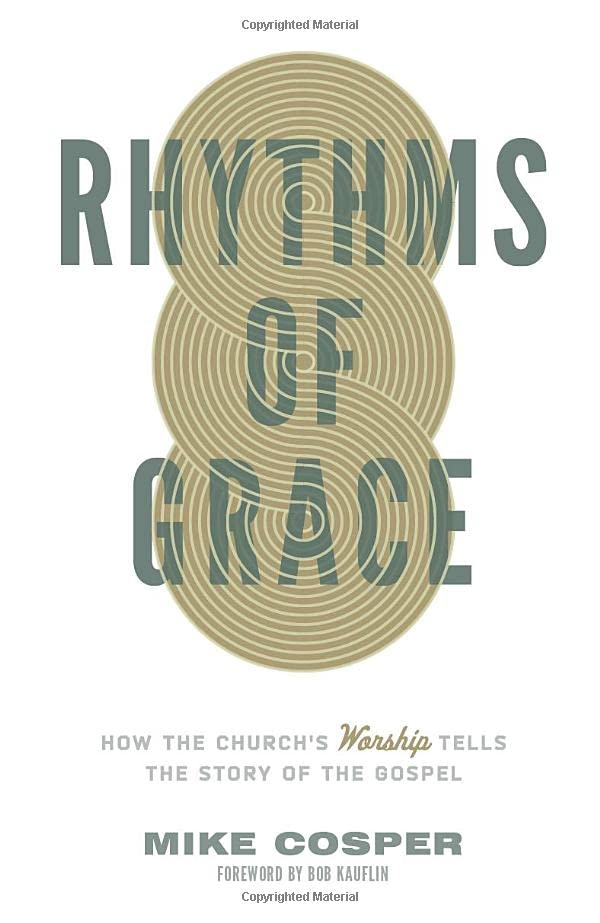 Rhythms of Grace: How the Church’s Worship Tells the Story of the Gospel

There has long been a tension between worship that is formal versus worship that is freely expressed. Mike Cosper’s new book pleads for thoughtful worship service planning that derives its shape and goals from the gospel. It calls worship leaders to consider the strengths of introducing formal, liturgical service structures to local contemporary churches.

Cosper is a leading voice among young evangelical worship leaders. As one of the founding pastors of Sojourn Community Church in Louisville, Kentucky, he brings practical credibility to worship service planners who are in the trenches. Rhythms of Grace is no missive from an ivory-towered academic; his writing is aimed at those who can implement gospel-driven services on a week-to-week basis.

Cosper begins by presenting the story of worship, which he asserts is the story of the gospel. In compelling narrative form, Cosper “tells the story” of worship in the garden, the wilderness, in Israel (primarily the temple), and with Jesus’s coming. Readers seeking a propositional synthesis of biblical texts may find this approach off-putting (think Sally-Lloyd Jones’s Jesus Storybook Bible, but pitched perfect for grown-ups). But while there is room for quibbling with some of the storytelling, Cosper’s overall effect and point is strong: the church’s biblical basis for worship does not come from forced proof texts or generic principles, but from a robust awareness and celebration of God’s working through salvation history. Rhythms of Grace does exactly what Cosper wants worship services to do: it rehearses the gospel rather than assumes it.

Next, Cosper provides a helpful paradigm for considering worship gatherings, which he labels “Worship One, Two, Three.” In brief, Christian worship has one object and author (God), two contexts (the church scattered and gathered), and three audiences (God, church members, and the world). Cosper’s chapter entitled “Worship as Spiritual Formation” follows the work of James K. A. Smith and others to argue that our participation in worship services forms us in profound ways and to a surprising extent.

Cosper’s next chapter outlines the major contours of church history and their effects on gathered worship services—not usually a topic of great contentiousness. However, while discussing the effects of revivalism on churches, Cosper critiques the “Temple Model” of worship. This influential model, principally advocated by John Wimber and others within the charismatic movement, parallels the worship experience with entering various locations within the OT temple. While it is difficult to fault the substance of Cosper’s critique, the criticism is a bit misguided. After a brief page-and-a-half of insightful discussion, the revivalist Temple Model is compared with Roman Catholicism in ways that aren’t fully fair. The Temple Model should instead serve as more of a conversation starter.

The book concludes with a discussion of music and then a call for worship leaders to embrace their pastoral function, including practicalities aimed at Cosper’s target audience of service planners. The appendices are a treasure trove of sample service orders, recommended resources, and advice on topics as diverse as congregational singing and audio amplification. It is difficult to think of a worship leader who will not benefit from Cosper’s work.

Throughout, Cosper is a model of careful sourcing and charitable dialogue. He cites standard works by well-known evangelical authors such as Don Carson, Bryan Chapell, Tim Keller, and Harold Best. Additionally, Cosper interacts generously and broadly with writers from the Christian Reformed and Anglican traditions. Those who clamor for evangelical pastors to become well-read can point to Cosper as proof that it can be done.

I wonder whether the chapters in Rhythms of Grace that are devoted to church history would benefit from a historical discussion about why so few liturgical churches are still gospel-focused churches. Pushed to an extreme, liturgists can view services like recipes for baking mature believers, implying that if service planners get the ingredients right, the cookies will be delicious (lex orandi, lex credendi can slip into the potential abuses of ex opere operato). Gathered worship services, however, cannot benefit a churchgoer in abstraction. Church attenders must not confuse merely rehearsing the gospel by form with receiving the gospel by faith. Rehearsing should be embraced to the degree it helps our church receive.

Rhythms of Grace is invaluable to the service planner seeking introduction to the merits of formal liturgical patterns, and I definitely will use it in my undergraduate classes. Many of my students begin with worship service paradigms borrowed from concert or stage venues, and their worship service orders revolve around tempos and keys rather than deep gospel truths. While few liturgical writers appeal to them, Cosper has hit them right between the eyes.