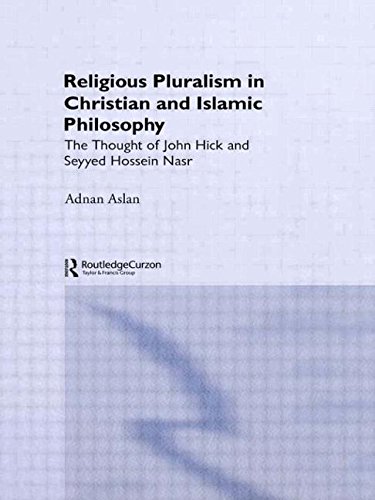 Religious Pluralism in Christian and Islamic Philosophy: The Thought of John Hick and Seyyed Hossein Nasr

As the title indicates, this interesting book is a comparative discussion of the philosophies of religious plurality developed by two eminent thinkers, one of which writes from within the Islamic tradition, the other from within the Christian tradition. Moreover, interested readers of Themelios who are familiar with Christian and Western treatments of the issues raised by religious plurality will find this study from an Islamic perspective particularly thought-provoking. (Dr Adnan Aslan is a Research Fellow at the Centre for Islamic Studies in Istanbul.)

A helpful introductory chapter comparing the intellectual biographies of the two thinkers, followed by a second chapter introducing the reader to some of the key elements of the philosophies of Hick and Nasr provide an excellent and accessible overview for the reader who knows little of their work. The following chapters explore some of the principal issues raised by religious pluralism and the ways they have been dealt with by Hick and Nasr (i.e. religious language, religious experience, epistemology, relativism, the nature of religions, salvation, and the nature of God). The volume concludes with a short (too short) chapter looking at attitudes to other faiths in the scriptures and histories of Christianity and Islam. Finally, in a brief Appendix Aslan provides the transcript of an illuminating discussion he had in 1994 at Hick’s home with both Hick and Nasr about ‘religions and the concept of the Ultimate’.

John Hick, one of Britain’s foremost philosophers of religion, has famously critiqued exclusivist religious belief systems (particularly Christian exclusivism) and developed a ‘pluralist’ thesis which argues that the religions of the world are all responses tot he same ineffable, transcendent Reality. Indeed, in an attempt to accommodate as many conceptions of the Absolute as possible. Hick has abandoned the term ‘God’ (which is invested with too much theistic content) for ‘the Real’. Similarly, Seyyed Hossein Nasr does not adhere to traditional Islamic exclusivism, but rather working within the tradition of ‘perennial philosophy’, argues that God has manifested himself within the different world religions. Although there are some obvious similarities between the two thinkers, Aslan’s book carefully draws out the important differences and judiciously evaluates their respective strengths and weaknesses.

Perhaps the most important difference between the two (which is clearly apparent in the Appendix) is the subtle but profound one that, whilst Hick speaks of ‘the Real’ as being simply ‘there’ to be discovered and responded to, Nasr (although there is some ambiguity in his thought) wants to work with an understanding of revelation. That is to say, he believes God to be actively manifesting himself in culturally relevant forms within the world religions. As Aslan quite rightly argues, whilst Hick’s thesis is more philosophical (‘ideological’), Nasr’s is more ‘religious’ (111). To use Pascal’s phrase, whilst Hick has construed a ‘god of philosophers’. Nasr (although he agrees with Hick’s conception of ‘the Real’), working much more from an Islamic theistic perspective, tends to presuppose ‘the God of Abraham, Isaac and Jacob’.

Although Aslan makes some valuable criticisms of both Hick’s and Nasr’s thought, and although there is of course nothing wrong with agreeing with one thinker instead of another, the impression one gets is of an overly prejudiced treatment. There must be convincing reasons for preferring one thesis over another. In too many cases these were not given. Nasr’s thought is simply not subjected to the same critical scrutiny as Hick’s. For example, Aslan makes the following statement: ‘Hick maintains that the absolute truth claims … stem from human subjectivity not “divine objectivity” ’. In challenging Hick’s view one might claim that if the absolute truth claims of each religion … come from … the Absolute itself [Nasr’s position], then Hick’s hypothesis of religious pluralism requires a reformulation’ (106). However, although Aslan goes on to unpack this a little, he does not demonstrate in what way this is a ‘challenge’ to Hick’s pluralism or why it might be a philosophically more cogent thesis, only that it is another position which he finds more acceptable. Indeed, it has to be said that, although throughout the book Hick bears the brunt of Aslan’s criticism, his pluralist hypothesis appears more coherent than Nasr’s inadequately critiqued perennialism.

Although, as might be expected, Aslan has an admirable grasp of both Islamic thought and Nasr’s philosophy, there are some arguments (if I have understood them correctly) over which he seems to lose his grip. For example (and this quotation draws attention to the book’s great need of a proof-reader), ‘Religious exclusivism is self-contradictory. If the Christian feels entitled to adopt a position exclusivism, then it must be equally acceptable that a Muslim, by virtue of being a Muslim, can adhere to an Islamic exclusivism … A religious exclusivism must be formed in a manner that eventually nullifies its won existence’ (103). This is hardly a cogent critique of the exclusivist position. Exclusivism is not self-contradictory. It is rational and logical (some would say, to a fault). The exclusivist, adhering to the principle of non-contradiction, argues that, regardless of what other faiths claim, where their doctrines disagree with those of the exclusivist’s faith they are to be considered false. People have the right to believe what they want, but in the final analysis there is a truth to be accepted or rejected, and that truth is manifested principally in the exclusivist’s faith. As to whether exclusivism ‘eventually nullifies its own existence’, nothing could be further from the truth. In an ambiguous world where not everyone accepts ‘the truth’, the existence of the exclusivist’s truth-proclaiming faith will always be of cardinal importance.

As to Aslan’s own position, he writes as a Muslim who is critical of, but who has nevertheless felt the force of Hick’s and Nasr’s arguments. As such he attempts to provide a framework for an ‘Islamic pluralism’ (187–96). However, his thesis is in fact influenced much more by Islamic considerations than by pluralist or perennialist philosophy. As such, what he unwittingly presents us with is not ‘Islamic pluralism’, but ‘Islamic inclusivism’. It is not a case of all religions leading to ‘the real’ but rather to Allah: ‘The God of the Qurun is not only the God of the Muslim people by the God of all humankind’ (197).

Despite these criticisms, this is a thought-provoking and worthwhile study which I have no hesitation in recommending to Christian seriously interested in theological approaches to religious plurality.