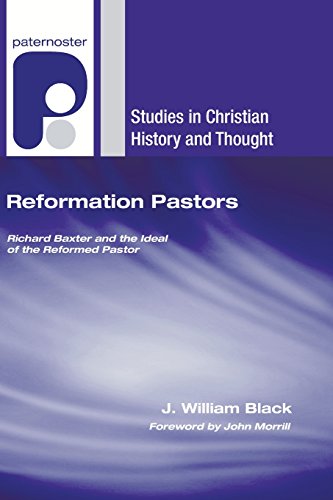 Reformation Pastors: Richard Baxter And The Ideal Of The Reformed Pastor Studies in Christian History and Thought

The progression from a Bible-based Reformed theology to actual pastoral practice is often a difficult one, and many a minister has discovered an uncomfortable, yet productive, tension between the two.

Amongst the godly pastors who have sought to ground Reformed theology in the daily lives of those in the parish, the seventeenth-century puritan, Richard Baxter stands out. This is because of his unique combination of indomitable zeal, strategic vision and concern to see the principles of the Reformation fully fleshed out—in his case, in the town of Kidderminster. Baxter established the Worcestershire Association of likeminded godly ministers, which provided an ideal platform for mutual encouragement and edification, and also allowed disciplinary concerns to be tackled at a higher level than the individual minister’s parish. He also used his widespread network of puritan contacts to ensure that godly young men who were considering entering the ministry were given the opportunities for education and practical hands-on parish experience. This was often in his own home, which became an early model of the puritan home seminary. Always the godly pragmatist, Baxter was well aware that a university education, though necessary, was no substitute for learning at the feet of an experienced pastor actually doing the divinely-appointed task of the minister.

Black’s contention is that Baxter painfully realised the obvious deficiencies of the older Elizabethan puritan model which focused solely on the pulpit. Instead, he initiated a system of pastoral care that involved a systematic pattern of visitation, catechising and church discipline to protect the integrity of the Lord’s Table, and preaching. This saw astonishing results and had a profound influence on future generations of puritan and nonconformist ministers. None of these elements in the Protestant minister’s toolbox were particularly new, but Baxter’s reformulation and overall evangelism-motivated pastoral strategy was indeed a new departure in the Protestant English church.

Black suggests that Baxter looked further back than his godly Elizabethan predecessors and found an early model for a pastor-led, parish-based reformation in the works of the Strasbourg Reformer Martin Bucer. Bucer had an important influence on English Protestant ministers when he came to the England of Edward VI at the request of Archbishop Cranmer. It is here that the book is on a less solid footing, as it is notoriously difficult to ascertain the exact influences and connections between two writers separated by more than a century. Whatever the exact correspondence, Black does manage to provide an intriguing insight into the theological presuppositions and pastoral activities of two influential Reformed pastors.

As befits a book with its origins in a Cambridge doctorate, Black’s work abounds in detail and is particularly strong in setting out the fascinating historical context of the period between the failure of the proposed Presbyterian national English Church after the Civil Wars, and the restoration of episcopacy in 1660. Baxter seized on this vacuum of ecclesiastical authority to establish his unique pastoral experiment and was spurred on by the threat of the numerous separatists and sects, who thrived in this period of great instability and opportunity. The potent combination of Baxter’s published works, the network of young ministers he mentored and supported, and the enduring example of his pastoral strategy in Kidderminster have ensured his reputation as the exemplary Reformed pastor. This book offers a challenging and inspiring antidote to the prevailing apathy in the Western church today, and offers a well-researched historical portrait of a man who recognised the extraordinary privilege and responsibility of presenting the gospel to a fallen humanity.