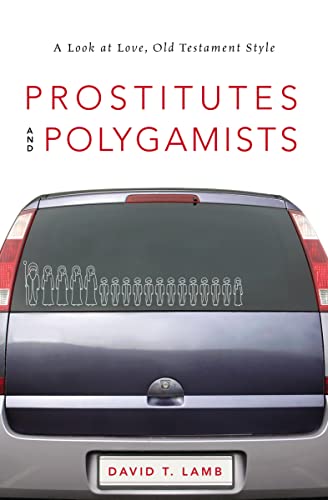 Prostitutes and Polygamists: A Look at Love, Old Testament Style

David Lamb thinks we don’t talk enough about sex. The Bible does, a lot, and so should we. This book represents his attempt to make sense of the obvious sexual brokenness of OT “heroes.” The beauty of redemption is that God takes flawed men and women and weaves them into his plan. If he can do this with them, he can do this with us, too. That message comes through clearly.

But this is not your grandmother’s book on sexual ethics (unless your progenitor, like King David’s, was a prostitute [see Matt 1:5–6]). This much should be obvious from the cover image—an SUV with sticker outlines of a patriarch, his four wives, twelve sons, and a daughter—which gives a pretty good sense of the book’s tone. Watch out, this book is funny. He defends his “wacky sense of humor” (p. 28–29), claiming that it helps us deal with pain, speak the truth, and stay humble. There’s no doubt that his humor is disarming (Lamb had me laughing even against my will at times). Certain audiences will appreciate that. For others, however, I fear he may have crossed the line. In places he is unnecessarily edgy, reading sex into the text where it is not (e.g., p. 20, Esther’s approach to the king; p. 38, plants are sexually active?). More significantly, at times his casual style betrays sloppy theology. He assumes that the protagonists know these stories had been written about them (p. 22; on what basis?). He claims, without explanation, that “humans have two distinct natures,” referring to maleness and femaleness (p. 37; how does our incarnate Lord represent both genders?). He confuses “name” with epithet, referring to the Hebrew ishah (“woman,” p. 43). These may seem to be picky matters, but a popular audience is even more susceptible to unintended implications of imprecision. They expect that a Bible expert knows what he is talking about, and therefore they deserve a more rigorous articulation of the basis for his claims. I, for one, would like to see justification for this conclusion:

God’s first words to the humans are essentially, “Have lots of sex!” In terms of the earth-filling mandate, I think we can check that one off our to-do list, but that doesn’t mean God wants us to stop having sex. (p. 38)

Why not? In a book about OT sexual ethics, this question begs an answer. And while Lamb jokingly exposes readers to ancient ways of thinking, he could offer a more sober assessment of ancient Near Eastern issues. For example, his analysis of the “days” of creation and the imago Dei (pp. 34–35) could benefit from richer engagement with current scholarship (e.g., J. Richard Middleton, The Liberating Image: The Imago Dei in Genesis 1 [Grand Rapids: Brazos, 2005]; W. Randall Garr, In His Own Image and Likeness: Humanity, Divinity, and Monotheism, CHANE 15 [Leiden: Brill, 2003]). Sandra L. Richter (The Epic of Eden: A Christian Entry into the Old Testament [Downers Grove, IL: IVP Academic, 2008]) has shown how the themes of both creation and covenant can be adequately addressed without sacrificing accessibility. Lamb also misses a wonderful opportunity to explore the covenantal context for sexual ethics. After all, the Israelite instructional material is not primarily addressed to the world at large, but is embedded in a narrative in which Yahweh is setting Israel apart as his covenant people. While I would not disagree with Lamb’s claim that marriage between one man and one woman is God’s “ideal” (p. 117–18), the command against adultery has more to do with protecting the stability of the covenant community and the rights of fellow covenant partners than outlining an abstract ideal.

On the bright side, Lamb’s analysis gets stronger towards the end, and he tones down his humor in the chapters on rape and incest, which comes as a welcome relief. I found his most provocative proposal—that the condemnation of Sodom has more to do with inhospitality and injustice than homosexuality—surprisingly persuasive. Lamb notes that later biblical reflections on Sodom, even in the most sexually charged passage of Ezekiel 16, focus on the “abominations” of Israel’s neglect of the needy (vv. 49–50) rather than sexual violence (p. 178–79), though I would hasten to add that the Sodomites’ violent intentions surely represent an extreme form of inhospitality. For the record, Lamb disagrees with LGBT hermeneutics by holding that the OT clearly condemns homosexuality (Lev 18:22; 20:13) and that “there is nothing in the context of these Leviticus laws to suggest they were temporary laws meant to apply only to Israel or that it would have been fine in the context of a committed homosexual relationship” (p. 163). Even so, the focus of his book is biblical narrative, not instructional material, so readers hoping for a fuller response to the arguments of the “gay Christian” movement will have to look elsewhere (e.g., Robert A. J. Gagnon, The Bible and Homosexual Practice: Texts and Hermeneutics [Nashville: Abingdon, 2002]). Since homosexual behavior is never expressly condemned in OT narrative (in contrast to OT law), it gets little treatment by Lamb. One could fairly conclude that a purely narrative focus proves inadequate as a basis for a biblical ethic. Christopher J. H. Wright’s both-and approach to these biblical genres is a more reliable guide (Old Testament Ethics for the People of God [Downers Grove, IL: InterVarsity Press, 2004], 327–32).

Lamb doesn’t shirk the opportunity to address other urgent problems, including sexual abuse, date rape, sex trafficking, voyeurism, and incest. In spite of the tough topics addressed, this book is an easy read. It could work for a college/career group that would benefit from edgy humor to break the ice. This, I imagine, is his intended audience. So for his ability to connect with them he gets high marks. However, be aware that Lamb’s perspective is decidedly Western and his tone American in his blunt talk about sex. He engages briefly with modern polygamy in Mormonism and in the African tribal context (p. 80), but his treatment is far from thorough and he makes no mention of Islam (incidentally, some of my Filipino Muslim friends once told me they wished their husbands would take a second wife so they could have help with the housework!). Lamb leaves readers wondering whether polygamy is unbiblical or merely un-American. In a multi-cultural world where sexual ethics are less and less obvious, a clear, sober, and thorough answer to this question is still sorely needed. Paul Copan’s treatment of polygamy in Is God a Moral Monster?: Making Sense of the Old Testament God (Grand Rapids: Baker, 2011) is the right sort of beginning, but a more comprehensive treatment of other sexual issues remains to be written.