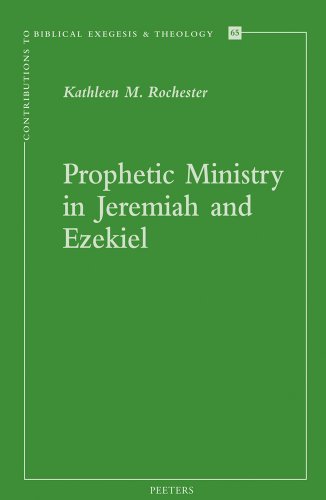 Prophetic Ministry in Jeremiah and Ezekiel

Kathleen Rochester tutors for North-Western University, South Africa, and is also involved in itinerant ministry in Asia and elsewhere. This book is a revision of her PhD thesis, completed at Durham University. It compares and contrasts the books of Jeremiah and Ezekiel in six chapters. An introductory chapter is followed by four chapters discussing different aspects of prophetic ministry, then a conclusion. A bibliography, and author, subject, and Scripture indexes complete the book.

The introductory chapter outlines the aim and methodology of the book. It aims to contribute to the understanding of OT prophecy, in particular its theology. Through a comparison of texts in Jeremiah and Ezekiel, Rochester focuses on the texts’ depictions of Yahweh, as well as his interactions with and the roles he gives to each prophet (p. 10). As such, her approach falls within what is known as “theological interpretation of Scripture” (p. 9). The term ‘ministry’ is chosen to describe the work of the prophets as it indicates “service of a subordinate to a divine superior where divine purposes and commands” are authoritative (p. 1). Rochester notes the lack of a comprehensive comparison of the ministries of Jeremiah and Ezekiel in scholarly literature. She aims to help fill this gap by using a canonical approach, reading the books in their final form (p. 5). Just as she works with an ‘implied author’ instead of a ‘historical author’, she also deals with “the texts’ portrayal . . . of each prophet” (p. 7). Nonetheless, the historical and geographical settings found in the books are considered to be significant in evaluating the ministry of the prophets (pp. 8–9).

Chapters 2–5 follow a similar structure: close exegesis of a selected text in Jeremiah followed by one in Ezekiel, then a comparison of the prophetic ministries. Chapter 2 deals with the call narratives. A discussion of Jeremiah’s call (Jer 1:1–19) is followed by a discussion of Ezekiel’s call (Ezek 1–3), including a sustained but helpful treatment of Ezekiel’s ‘speechlessness’ (Ezek 3:26; 8 pages). In the comparative section Rochester comments that the superscriptions (mention of ‘words’ in Jeremiah, ‘visions’ in Ezekiel) and different religious contexts (Yahweh is nearby in the temple in Jeremiah, distant in Ezekiel) anticipate differences that will be played out in the books (pp. 62–63). Although both prophets come from priestly families, only the book of Ezekiel is overtly priestly, in that it is characterized by “place, order and cultic worship” (p. 63). Moreover, while Jeremiah’s call is like a private conversation, Ezekiel’s is theatrical, which is consistent with “cultic worship on a grand scale” (p. 63). In Jeremiah, Yahweh is portrayed as one who reveals himself primarily through his word, whereas in Ezekiel, Yahweh is presented in ‘visions of God’ (pp. 64–65). The response of the prophets is contrasted: Jeremiah is spontaneous and candid, while Ezekiel makes no spoken reply in the call narrative (pp. 65–66). The last comparison is between the roles of the prophets: Jeremiah speaks as a prophet to Israel and to the nations; Ezekiel functions as a watchman for the house of Israel (pp. 66–68).

Chapter 3 compares and contrasts worker images. Worker images are examined because these metaphors have a capacity for multivalence in meaning, and the images are an “outworking of the prophetic ministries” (p. 69). Rochester discusses Jeremiah as an assayer (Jer 6:27–30) and then Yahweh as a potter (Jer 18:1–12). Ezekiel as a watchman is outlined (Ezek 33:1–20). Rochester plausibly suggests that the second watchman passage is not necessarily either a re-commissioning or the end of an inclusio, but instead could serve a janus function (p. 91). In the comparison section Rochester discusses the prophet in relation to Yahweh, the prophet in relation to the people, working for a response, the tools of the trade, destruction and hope, and working with perseverance. Similarly to Chapter Two, she highlights the context of the prophets as critical for understanding their roles. Jeremiah, as an assayer and potter, needs to work closely with his material, which represents the people. By contrast, Ezekiel as a watchman maintains a distance from both Yahweh and the people (p. 100).

The next chapter deals with the prophet in relation to the temple. Jeremiah’s ‘Temple Sermon’ (Jer 7:1–15) and then Ezekiel’s first temple vision (Ezek 8–11) are discussed. The comparison section covers these topics: the place of the temple; divine presence in temple and land; temple terminology; the focus on Yahweh instead of the temple itself; metaphors of hearing and seeing; temple worship; divine anger, jealousy and judgement; and message of hope. Noteworthy insights in this section include the suggestion that the more elaborate visual images of Yahweh’s presence counter the “visual lure of the idolatries” (p. 149), and the idea that Ezekiel presents judgement not as the opposite of salvation but the vehicle for salvation (p. 152). Again, Rochester finds that the different contexts of the prophets influence their presentation of their message. In this chapter, it is their proximity to the temple (p. 153).

Chapter 5 discusses deviant prophets in Jeremiah (Jer 23:9–23) and Ezekiel (Ezek 13:1–23). Rochester covers both deviant male and female prophets, and includes a short excursus on the thorny issue of God’s involvement in ‘deceiving’ a prophet (Ezek 14:9; pp. 178–81). The comparison section covers the gender of the prophet, a prophet’s ‘heart’ as not the true source of prophetic message, the divine council; prophetic visions and dreams, divination, objects associated with prophecy, the lifestyle of the prophet, the role of the prophet, standing against opposition, deception of a prophet, and the language of emotion and metaphor. As anticipated in the call narratives of the prophets, Jeremiah focuses on the ‘word’ of Yahweh and relational language. Ezekiel, by contrast, uses visual language instead of emotional expression and cultic transgressions over Decalogue breaches (p. 219). Rochester draws her conclusions in a succinct final chapter (pp. 221–224).

This book is clearly written and maintains good momentum. The exegesis of the chosen texts is cogent and sensible. Overall, her thesis that the contexts of the prophets strongly influence the form and content of their messages is demonstrated convincingly. Her conclusions are carefully worded and do not claim too much. Yet I was longing for further elaboration on some points. In particular, since this book’s approach falls within the general stream of ‘theological interpretation of Scripture’, I was looking for more discussion about the interaction between Yahweh placing ‘stumbling blocks’ (p. 47) and his involvement in deception (pp. 178–81), and the individual’s responsibility. More discussion about how Ezekiel’s historical and geographical situation necessitates the embodiment of his message in sign-acts would also be welcomed. Nonetheless, these minor points do not detract from a book containing helpful insights into the prophetic ministries of OT prophets, insights that await further development and application to contemporary situations.