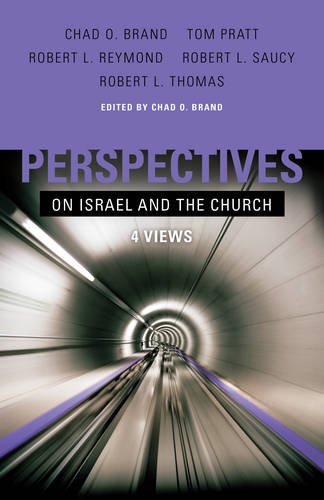 Perspectives on Israel and the Church: 4 Views

This book succeeds in presenting four different perspectives on Israel and the church in rigorous academic and engaging ways. Each view has a unique hermeneutical, ecclesiological, and eschatological position especially when it considers the relationship of “Israel” and the “church.” Each view is presented and then it is followed by three responses from those who are competing to win the mind of the reader. The four views are: Traditional Covenantal, Traditional Dispensational, Progressive Dispensational, and Progressive Covenantal.

First, Robert Reymond presents the Traditional Covenantal view. Traditional Covenant theology as is indicated by its name focuses on covenants. It believes in three covenants: the covenant of redemption, works, and grace. The covenant of redemption is between the members of the Trinity before the foundation of the world, the covenant of works is between God and our first human parents before their fall into sin, and the covenant of grace is seen after their fall as well as throughout the Bible, starting from Genesis 3:15. The covenant of grace can also be seen in the covenants with Noah, Abraham, Moses, David, and the New Covenant (Jer 31:34). In other words, the covenant of grace is seen throughout the Old and New Testaments. From the perspective of Traditional Covenant theology, salvation in both testaments is by grace through faith in Jesus Christ. The people of God in the Old Testament believed in the coming Messiah while in the New Testament they believed in Jesus of Nazareth as the Messiah (Luke 22:37; 24:25–27). Furthermore, the church is spiritual Israel, the sacrifice is Jesus Christ, the priesthood is for all believers, the temple is the hearts of believers, and the Promised Land is the Kingdom of God. In other words, there is no future role for the Jews and all Old Testament expectations are fulfilled in the church.

Second, Robert Thomas argues for the Traditional Dispensational view. The followers of this school believe that God deals with human beings differently in different dispensations. Each dispensation has unique elements and/or a covenant that shapes the way in which God relates to human beings. These dispensations are: innocence, conscience, human government, Abrahamic promise, Mosaic Law, grace, and the millennium which is followed by the eternal state. From this perspective, Israel and the church must be distinct. The promises of God to Old Testament Israel will be literally fulfilled. Furthermore, the Jews today are Israel and interpreters should read the Old Testament literally without bringing into it the meaning of the New Testament. In other words, the Jewish people today are the recipients of the Old Testament promises including the land promises. In this perspective, the age of the church will be over at the rapture. The Jewish people will go through the tribulation, believe in Christ, and then they will experience the fulfillments of Old Testament prophecies in the millennium.

Third, Robert Saucy presents the Progressive Dispensational view. This view asserts the distinction of Israel from the Church. However, unlike traditional dispensationalists Saucy has adopted a more sophisticated hermeneutic. He states that the “fundamental principle of hermeneutics underlying progressive dispensationalism’s interpretation of Scripture is that all of Scripture is to be understood according to its plain meaning, derived from historical-grammatical interpretation done in consideration of its literary genre and both the divine and human authors” (p. 165). The divine context goes beyond the historical context yet it is still an author-centered hermeneutic. Furthermore, the historical meaning is like the seed that develops into a tree, i.e., the canonical meaning. The genes are the same and if the seeds did not grow into a tree then we need to limit ourselves to the literal historical meaning. In summary, the church is not Israel. The latter is distinct in its identity as well as its role in God’s plan. Messianic prophecies will be fulfilled in the future in Israel in the land of Israel.

Fourth, Chad Brand and Tom Pratt Jr. present the Progressive Covenantal view. They present their view in five points: (1) The oneness of God demands one people. (2) The people of God are his by divine election and spiritual birth. (3) The people of God arise from the supporting root of historic Israel. (4) The marker of the people is the internal presence of the Holy Spirit. (5) The people of God are the body of Christ. Integrating the New Perspective on Paul they discuss election in dialogue with monotheism within the framework of salvation history. They affirm that the church today is the people of God without accepting the notion of replacement. They argue that “the entire debate over the significance of Israel and the church in eschatological perspective is bound up in the history of salvation as it is revealed in the metanarrative of Scripture” (p. 292). In other words, they clearly argue that the church does not replace Israel and ethnic Israel will be saved in the future. Both Israel and the church will be one in the millennium and the eternal state.

In light of the aforementioned description, it is fitting to make the following comments. First, Evangelical theologians in the West especially in North America continue to ignore the wider Christian context. Both the Orthodox Church and the Catholic churches have made some important contributions towards a better understanding of the relationship of the church and Israel. Unfortunately, the book focuses on the Evangelical world and ignores “Two Covenant Theology” as understood in some Orthodox, Protestant, and Catholic circles. It also overlooks some of the dominant discussions within Messianic Judaism as summarized by Richard Harvey in his book Mapping Messianic Jewish Theology: A Constructive Approach (Milton Keynes, UK: Paternoster, 2009). It ignores all the Palestinian theological voices. The book does not engage the Kairos document, Naim Ateek, Mitri Raheb, Christ at the Checkpoint conferences, or other writings including my book, The Land of Christ: A Palestinian Cry (Eugene, OR: Pickwick, 2013). It marginalizes the missional impact of the pertinent study and its importance to the nations of the Middle East as well as to the Islamic world. Admittedly, the Palestinian question has partly been raised, which is a step forward, but there is a lot of space for further development.

Second, the four scholars have not unpacked the diversity of the meaning of the word “Israel” in Scripture, and most of the times they highlighted a synchronic meaning. At certain times it was stated that the seed of Abraham will be distinct physically (p. 167) and the definition of Israel is based on its territory or borders (pp. 169–70). Assuming continuity between biblical Israel and the contemporary Jewish people has not been verified or discussed. Furthermore, equating biblical Israel with the modern state of Israel or highlighting their unbroken continuity marginalizes the distinctions between the words “Hebrew,” “Israel,” and “Jew.” A person could be a Hebrew but not Jewish or Israelite—for example, Abraham. A person could be a member of Israel and a Hebrew without being Jewish—for example, the prophet Samuel. He lived at a time in which the referent “Jew” was not yet coined. In fact, the word “Jew” does not occur in the Pentateuch. It is a post-exilic term. One could be Jewish but not an Israelite or Hebrew—for example, Antiochus the Macedonian king (2 Macc 9:17). A person could be brought into the household of Israel and could become Jewish, but not a Hebrew or a descendant of Jacob—for example Achior the Ammonite (Jdt 14:10). In addition, the book of Esther informs us that many nations became Jews (Est 8:17). In short, the terms “Israel,” “Jew,” and “Hebrew” are not identical. We cannot define Israel in a simplistic way that ignores its multiple meanings, social locations, and diversity in the genre of the text. The meaning of “Israel” is related to the discourse in which it is embedded. Israel has many meanings in the Scriptures that have not been highlighted in this book. Clearly DNA or biology or blood is not the defining factor in determining membership in Israel (Matt 3:9: John 8:37–39). The implications of membership in Israel are important for the continuity/discontinuity discussion. Further, the borders of “Israel” in the Scriptures are diverse. The Pentateuch alone presents three different borders. The discussion needs to reconsider this territorial flexibility.

Third, the time is ripe for Evangelicals to move away from an event-centered eschatology in which we discuss the programs of God and instead focus on a theocentric eschatology or perhaps a Christocentric eschatology in which we discover the heart of the missional God. The question of the relationship of Israel and the church needs to shift away from ontological discussions and move into more functional ones. How can the church be a blessing to Israel and the rest of the world? How can the Jewish people be a blessing today? The context of the discussion needs to be expanded and should include both Messianic Jewish and Palestinian Christians. Last, I still welcome the book and hope that it will motivate the people of God to ask the same questions in the occupied Palestinian Territories today. Perhaps, the discussion will be different.