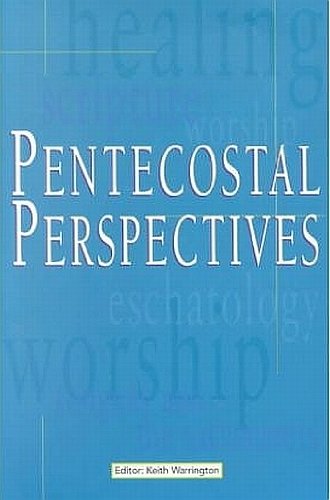 This collection of nine essays from Pentecostal ministers and scholars operating in Britain demonstrates that British Pentecostalism can no longer be accused of anti-intellectualism. The book consists of two historical essays surveying the history and development of Elim and the Assemblies of God respectively, followed by chapters covering; the inspiration and authority of the Bible; the gifts of the Spirit; baptism in the Spirit; eschatology; healing and exorcism; worship; and the ordinances.

The book will prove invaluable to those who wish to learn more about current Pentecostal belief and practice. I, for one, learned much from the historical essays. However, the chapters are primarily descriptive in nature and as such, do not particularly engage with other theological views. This is the collection’s greatest weakness. I would have appreciated much more space being given to addressing questions concerning how particular Pentecostal perspectives can both enrich and challenge other perspectives. More critical self-reflection on Pentecostal beliefs would also have been welcome. The kind of theological reflection that Pentecostals certainly are capable of as seen, for example, in the excellent Journal of Pentecostal Theology, is sadly generally absent.

The major exception to the above comment is Siegfried S. Schatzmann’s excellent chapter on the gifts of the Spirit in which he carefully critiques the majority Pentecostal view on the relationship between salvation, Spirit baptism and the gifts of the Spirit. Despite David Pett’s articulate exposition in the following chapter, of the majority Pentecostal view that Spirit baptism is an experience subsequent to regeneration, I found Schatzmann’s position the more persuasive. The chapters by Schatzmann and Pett highlight the fact that this collection of essays is by no means homogeneous. Differences clearly emerge between scholars from Elim and Assemblies of God. In this connection the lack of any contribution from representatives of either the Apostolic Church or the Black Pentecostal churches is disappointing.

As well as Schatzmann’s chapter and the two historical essays, another highlight for me was D. Neil Hudson’s chapter on worship. This chapter moves beyond a description of the historical development of Pentecostal worship. Hudson highlights a number of theological concerns about contemporary Pentecostal worship namely; the danger of triumphalism; an inadequate view of spiritual warfare; the lack of awareness of other Christian traditions; the lack of attention to confession and intercession; and the danger of individualism.

In conclusion, this collection of essays provides a highly readable outline of the history and current beliefs and practice of British Pentecostalism. As such it is to be welcomed and there is much to learn from it. However, it is not the place to look for sustained reflection on a Pentecostal contribution to theology.