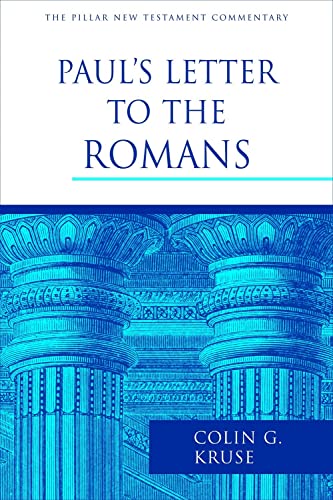 Paul’s Letter to the Romans

Colin Kruse previously wrote a commentary on 1–3 John in the Pillar Series, so those who are familiar with these volumes know him (see also his commentary on John’s Gospel in the TNTC series). He is also well-suited to write on Romans since he earlier composed a work on Paul’s view of the law. Kruse’s Romans fits well with the intention of the series, for we have an accessible but learned exposition of the letter. Naturally, the author can’t delve into issues in depth given the size limitations of the volume, but he dialogues regularly with modern scholarship. At the same time (in one of the most beneficial features of the volume) he often quotes ancient sources as well.

Readers will naturally be interested in Kruse’s understanding of the letter, and a survey of some of his conclusions will be shared here. The letter is addressed to both Jews and Gentiles with the latter being the majority. The primary purpose of the letter was to minister to the readers in Rome and to share with them as an apostle his understanding of the gospel. At the same time, the Pauline gospel articulated in Romans would also address the divisions in the Roman churches between Jews and Gentiles and prepare for the hoped-for Spanish mission. The letter was written between AD 54–59, and chapter 16 is considered to be part of the letter as well.

Kruse has a nuanced view of the New Perspective; he acknowledges its strengths but he also claims that there is a polemic against legalism that can’t be washed out of the letter. The focus of the letter is not justification by faith but the gospel. Justification is understood forensically, and the notion that righteousness also has transformative dimensions is rejected.

The Gentiles who keep and observe the law in Rom 2, including those described in Rom 2:13–15, are Gentile Christians transformed by the Holy Spirit. The hilastērion in Rom 3:25 includes both the notions of expiation and propitiation, and the latter is supported by the emphasis on God’s wrath and judgment in Rom 1:8–3:20 (cf. 1:8). In Rom 7:7–25 Paul uses the rhetorical technique of impersonation (prosopopoeia) where he uses the first person to present “speech in character.” Romans 7:7–12 are fiercely contested in Romans scholarship, and Kruse argues that Paul describes Israel’s experience before and after it received the Mosaic law. Romans 7:14–25 continues Paul’s speech in character rhetoric as he continues to describe the experience of Israel. Thereby Paul portrays in vivid terms what it means to live under the law, and hence what we have here is a presentation of pre-Christian experience under the law. The utter failure and bondage depicted in Rom 7:13–25 doesn’t accord with the victory believers enjoy according to Rom 6 and 8.

Kruse surprises somewhat in maintaining that the reference to “God” in Rom 9:5 refers to God the Father, not to Jesus Christ. Israel’s election in Rom 9–11 is not only corporate but also individual, and hence the chapters teach individual election to salvation, as Paul explains how God’s promises to the Jewish people were fulfilled. Interpreters have long debated what Paul means in saying that “all Israel will be saved” (Rom 11:26). Kruse rejects the notion that this refers to both Jews and Gentiles (the church of Jesus Christ), arguing that ethnic Jews are intended here. The salvation of the Jews here doesn’t refer to the salvation of Israel near or at the Parousia but refers to the salvation of Israel all throughout history, to the salvation of a Jewish remnant throughout history. At the same time Israel is not saved by adhering to the law but only through faith in Jesus Christ.

Paul addresses the weak and the strong in Rom 14:1–15:6; the weak are mainly Jewish Christians while the strong are mainly Gentile Christians. Kruse dissents from the notion that we have an anti-imperial message in the letter.

Kruse’s work is sane, one that pastors and teachers will use with profit, and one that stands within the Reformed tradition in Romans commentaries. Sometimes his discussions are quite brief and laconic. For instance, further discussion on the theological significance of Adam’s sin for humanity would have been helpful, and I would have liked to see more of a defense of his reading of Rom 11:26. But one can hardly complain about this lucid and learned work, for we all know the limitations of space in writing commentaries, and we can be thankful for Kruse’s excellent addition to commentaries on Romans.