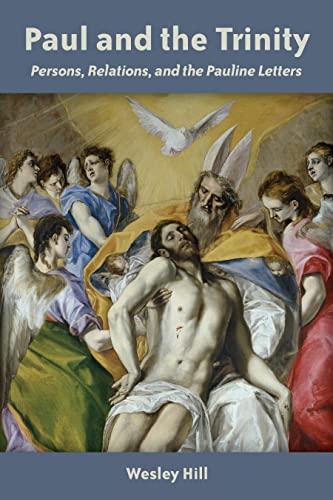 Paul and the Trinity: Persons, Relations, and the Pauline Letters

Wesley Hill’s book on Paul and the Trinity grows out of his PhD work at Durham University under Francis Watson. It is encouraging that a topic like this would be acceptable for doctoral research; the chances of seeing such in NT scholarship twenty or thirty years ago were almost nil. The book is nicely structured with an introductory chapter and then a chapter setting the course for the study. In chapters three and four the relation of Jesus to God is considered through an analysis of Phil 2:6–11 and 1 Cor 8:6 and 15:24–28. Hill then turns in the final chapter to the Spirit’s relation to God and Jesus before offering a conclusion.

In chapter one Hill situates his study against the broader landscape of NT scholarship. He argues that scholars should follow a trinitarian model in unpacking the identities of God, Jesus, and the Spirit in Pauline theology. First, he considers the low christology of scholars like James Dunn, James McGrath, and P. M. Casey. These scholars emphasize Paul’s monotheism and contend that Jesus does not quite reach the same stature as God in Pauline thought. Second, another historical approach which features a number of scholars, including Richard Bauckham and Larry Hurtado, argues for a high christology. There are distinctions between Bauckham and Hurtado, of course, but they both maintain that Jesus was worshiped as God and Bauckham contends that Jesus is included in the divine identity. Despite the differences between the scholars surveyed here, they all read Paul historically and emphasize that they are not privileging later creeds like Nicea in formulating Pauline christology. Hill argues for another approach. Whereas previous scholars have asked a vertical question, seeking to decipher whether Jesus reached God’s level, Hill says the question of the identities of God, Jesus, and the Spirit should be pursued by considering their relation to one another. He finds predecessors in the work of Nils Dahl, Leander Keck, and more recently Kavin Rowe and Francis Watson. Hill also considers trinitarian theology today with a brief sketch of Karl Barth, Karl Rahner, Jurgen Moltmann, John Zizioulas, Colin Gunton, and Robert Jenson. Recent trinitarian theology emphasizes that the persons of the Trinity are known by their relation to one another. Hill opts for a two-fold approach in his own study. First, he offers a historical reading of Paul to defend his relational understanding of the Trinity. Second, he uses trinitarian theologies as dialogical and dialectical resources to interpret Paul. Exegesis and theology, then, function together to interpret Paul.

Hill’s chapter here is most interesting and illuminating and mainly helpful. I wonder, however, if there is some lack of precision. He acknowledges a variety of trinitarian theologies regarding relations today. On what basis does he choose his dialogue partners and is clarity lost if the category of relations is selected without specifying the differences between the various trinitarian theologies proffered? Also, I wondered if the historical (Hurtado and Bauckham) and theological (Hill) approaches should be played off against one another. In other words, there is more than one way to skin the cat. Hill’s perspective is illuminating but so also is Bauckham’s. They are not necessarily mutually exclusive.

In the second chapter Hill examines texts where God is related to Jesus. For instance, God’s raising Jesus from the dead is linked in Romans 4 to the justification of the ungodly and to the life generated in Sarah’s womb. Hill argues that Abraham’s God in the flow of Romans 4 is christologically determined, so that the identity of Abraham’s God cannot be segregated from the identity of Jesus Christ. So too, in Rom 8:11 and 8:29 the God who raised Jesus is the one who foreknew the Gentiles as his people, so that “God’s identity is bound up with the Son” (p. 64). Similarly, in Galatians, God’s raising of Jesus is linked with the calling of Paul and the calling of the Gentiles to faith. God’s identity, then, is revealed in his actions in history in Jesus Christ. Hill concludes from the priority of the Christ-event in Paul’s theology that the category of monotheism should not receive precedence in unpacking Pauline christology. Instead, we should begin with the identity of God which is bound up from the beginning with the identity of Jesus. God is who he is by virtue of his relation with Jesus. Hill clarifies that he is not thinking of intra-trinitarian relations but of the identity of God and Jesus in soteriological contexts.

Such reflections stir up profound questions about the nature of the Trinity, and Hill doesn’t clearly opt for Aquinas over Jenson or vice-versa (see p. 74, n. 62). Still, I wonder if some further discussion might have helped at this juncture. God’s relation to Jesus in history (raising him from the dead for instance) is not necessary for God’s relation to the Son in the immanent Trinity. Otherwise, the incarnation would be necessary for divine identity, and the freedom and grace of God in redemption are jeopardized. To be sure, Hill restricts himself to the economic Trinity (p. 165n80), but some clarifying comments would have helped readers traverse the rugged and steep slopes of trinitarian theology, for discussion about the identity of God, despite Hill’s limiting his study to the economic Trinity, almost inevitably raises questions about the immanent Trinity. Christ as creator (1 Cor 8:6) and his “being in the form of God” (Phil 2:6), after all, are not reflections on the economic Trinity. Hill is informed by the early creeds and interpreters of the church, but he does not follow them all the way, for their christological and exegetical reflections were not restricted to the economic Trinity.

Chapter three examines God’s relation to Jesus in Philippians 2:6–11, and Hill argues that the identities of both are mutually determined. God is identified with reference to Jesus, and Jesus is identified with reference to God. Still, God in Pauline theology sends Jesus, exalts him, and raises him from the dead. It seems that Jesus, says Hill, is subordinate to God. Does that fact call into question the mutuality posited by the author? Hill argues that the relationship between God and Jesus is complex and asymmetrical. On the one hand, they are one, but on the other hand, Jesus obeys God and does everything to his glory. Trinitarian theology functions as a resource to explain these various ways of talking in Pauline texts. In the great confessional text found in Philippians 2:6–11 Jesus’s exaltation redounds to the glory of God. Hill reflects on the interpretations of other scholars, and argues that the identity of Jesus and God are bound together in this text. At the same time, all that happens to Jesus is for God’s glory. Hill calls on the resources of Trinitarian theology in the early church to unpack the unity between God and Jesus and the asymmetrical relationship between them.

Chapter four is similar in some respects, for Hill pursues the same question of the relation between God and Jesus with respect to 1 Corinthians 8:6 and 15:24–28. Again, he argues for what he calls “asymmetrical mutuality.” There is a sense, says Hill, in which Jesus is subordinate, and yet God’s identity as Father is determined as well by his relation to Jesus. He argues from 1 Corinthians 8:6 that God and Jesus both share the divine name, and yet Jesus is still distinct from the Father. Hill rightly observes that Bauckham’s own construal lacks complexity here, for he fails to observe the distinctions between God and Jesus. Hill says that we need to call on Trinitarian resources from the past and embrace redoublement. What we have here are two realities: Jesus and God share the same fundamental identity, and they are distinct from one another. He sees the same reality in 1 Corinthians 15:24–28, though I think Hill strays from the text and Pauline categories in saying that we almost have a two-way submission here. Actually, Hill mainly and rightly emphasizes the distinctions and mutuality between the Father and the Son. The submission of the Son in 1 Corinthians 15 doesn’t cancel out the truth that the Son is the Son. We see again the asymmetrical mutuality between the Father and the Son, so that there is both identity and distinction.

This is an important and largely convincing study. Hill has shown that the Father, Son, and Spirit in Paul are constituted by their relation to one another. Still, some of the texts explored also have implications for the immanent Trinity (1 Cor 8:6; Phil 2:6), and Hill doesn’t explore this dimension of the text. He does show, on the other hand, that retrieving the tradition of the early confessions and interpreters helps shed light on Pauline texts. At the same time, and even more fundamentally, these early interpreters came to their conclusions because careful reflection on Pauline texts and the remainder of the canon drove them to formulate what the scriptures teach about God, Christ, and the Spirit. The christology of the early fathers, as Hill shows, is not bereft of exegesis but is grounded in exegesis. They were not satisfied with one-dimensional answers but probed the text and came up with conclusions that accounted for the multifaceted character of the NT witness. Hill reproduces in his own exegesis the kind of biblical and theological reflection which our ancestors practiced. Such conclusions will not convince those who do not see a unified theology in the NT. But after years and years of speculative reconstructions by NT scholars, perhaps we are recognizing afresh that our ancestors were not more speculative than we. Indeed, they were often more grounded in the scriptures and pursued the scriptures with a “faith seeking understanding.” Wesley Hill engages in the same practice in this stimulating work, and we can thank him for that.